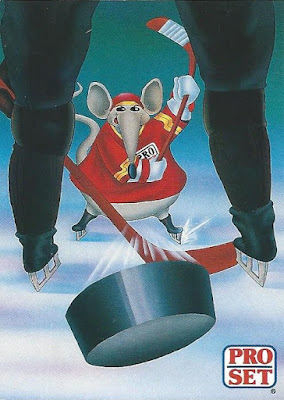 Why?:  My brothers and I were members of the short-lived Pro Set "Rink Rat" fan club in the early '90s.  For the 1991-92 season, Pro Set produced a couple of hockey cards for the club's members featuring its namesake rodent mascot.  I'm not quite sure what happened to my childhood copies, maybe I'll come across them someday.

I have no idea how many of these were printed, and how many of those printed were lost to time and/or careless children, but I do know that these are relatively rare nowadays.  I feel very fortunate to have secured this one for just a few bucks.  By comparison, there's just a single one of these available on COMC at the time of this post, and the asking price is an astounding $45.25.  eBay?  Just the same card from COMC, but marked up to $56 and change.  Yikes!

To me though, this is one of those cards where the pure nostalgia overrides any monetary value one could assign to the card itself.  Takes me right back to a simple time in life, collecting cards as a kid.  You can't put a price on that. 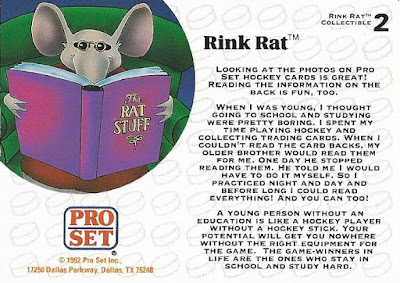 Cool card. I hadn't seen it or heard of the club. Good stuff. Thanks for sharing.

Cool. I don't ever remember hearing about these.

That's a new one on me. Now I wish I had joined the Rink Rat club. Awesome card.

Sounds like you got a great deal on this card. Never seen this one before, but I sure enjoyed collecting all of the different Pro Set SP's from the different sports.

That's phenomenal. Did any other cool stuff come with the membership?