A lot of focus is put on NHL players who achieve the famed 500-goal plateau during their careers.  This is a significant milestone indeed, and nearly everyone who has surpassed 500 career goals is enshrined in the HOF.

What I thought might be just as interesting as looking at the game's all time great scorers in the 500-goal club, and in fact more interesting in some ways, would be to look at players who are members of the 400-goal club.  With that, an idea for a series of posts was born.  In batches of three, I plan to feature in this series players who surpassed 400 career goals, but who hung up the skates for the final time before reaching the infamous 500 milestone.  I'll show a card of each player from my own collection as well, as long as I have one that is.

So, you won't see active players who would otherwise meet the criteria in these posts, like Sidney Crosby or Eric Staal, but you will see plenty of retired greats like tonight's trio... 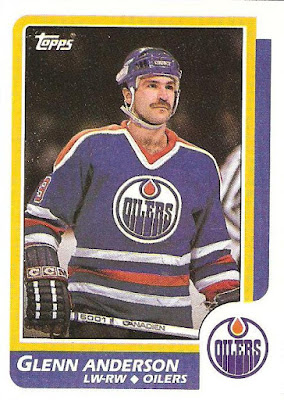 Talk about coming tantalizingly close to the big number!  Nobody has retired to date with 499 career goals, so Glenn's 498 give him the distinction of coming the closest to 500 of any player who fell short.  It's amazing that he didn't try to eek out just a few more games, though it seems there weren't any takers remaining in the NHL during his final (age 35) season.

Maybe Glenn wasn't all that bothered by coming up just short of 500 career goals though, considering he won an amazing six Stanley Cups as a player, and is enshrined in the Hockey HOF regardless!  There will be some names in these posts that were a surprise to me, but Glenn is not one of those, having played on those powerhouse Oilers teams throughout the 1980s.

I've got nearly two dozen Glenn Anderson cards, but none of them are all that exciting to me, so I went with this nice photograph courtesy of 1986-87 Topps. 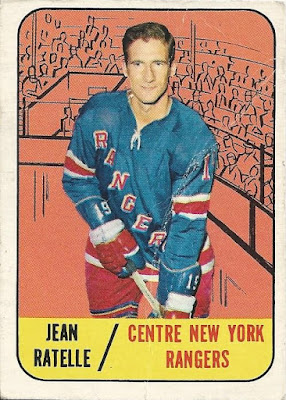 The next spot down on the list goes to Jean Ratelle, who spent his entire two-decade-plus NHL career with the Rangers and Bruins franchises.  While he was an amazingly successful player from an individual stats standpoint, and played on some really great teams in the early 70s, Jean never won a Stanley Cup, in contrast to Glenn Anderson's six.

Nevertheless, he did capture some individual hardware throughout his career, and was 6th all-time in points upon his retirement from the NHL.  Like Glenn Anderson, he is enshrined in the Hockey HOF.

This beautiful 1967-68 Topps card was a real steal off of COMC a couple of years back.  Got it for just a couple of dollars due to some paper loss on the back. 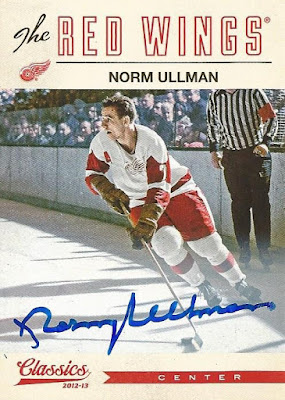 Finishing just a single goal behind his contemporary, Jean Ratelle, is center Norm Ullman.  Norm had the benefit of playing on a line with guys like Gordie Howe and Ted Lindsay early on in his career, but he was no slouch himself.  In fact he led the entire league in goals during the 1964-65 season.  His case is an interesting one because he spent the final two seasons of his career in the WHA.  It's almost certain that he would have surpassed 500 career goals had he scratched out two more NHL campaigns.

Norm is also enshrined, and it's not surprising that all three guys in tonight's post are given that I began with the highest goal totals in the 400 club and will be working my way down that list.

I absolutely love the amazing photograph, and bold on-card autograph on this 2012-13 Panini Classics Signatures autograph. If you were following my blog back in 2013 then you may recall that I went somewhat crazy acquiring these autos, so I'm sure a few more of them may resurface in these 400-Goal Club posts.

So, that's a wrap for this first installment.  I expect this series to get more entertaining as we go, as the names will become a bit more obscure the closer we get to the 400 mark.  Hope you enjoyed this look at some of the more under-appreciated scorers in NHL history, and thanks as always for stopping by!

Posted by shoeboxlegends at 8:00 PM

Heard of Anderson, but not the other two.

Love those Classic auto - I have a Dennis Hextall

Hey, I *met* Glenn Anderson! Well, just an autograph signing--in 2014 I went to Bryant Park in NYC to watch the first game of the Stanley Cup Finals on the big screen with other Ranger fans, and Anderson was among those signing autos. Oddly, I notice that the team-produced oversized card he signed lists him as having only 496 career goals. Online sources definitely say 498, so, hey, an error card!

Never met Ratelle, but saw him play a few times when I was a kid. He centered the famous "GAG line".

That 2012-13 Classics autograph set is so cool. I briefly considered building it... and now I wish I had. Like Elliptical.. I'm only familiar with Anderson, but I'm glad I learned about the other two.

Great idea for a blog series. I think Anderson had a long wait before getting into the HOF, would hate to hear it was over two measely goals lol.

The Ullman card is fantastic, looks like he's playing an outdoor game at dusk.

Oh man, I look forward to this series (and will try to keep from doing a Google search for 400-goal scorers so I'll be more surprised with the list as the series goes on).

Side note: I love the sketched-in crowd on the backgrounds of 1967-68 hockey cards.