Though most of my hobby purchases in recent years have been hand-picked single cards, I still can't completely resist the allure of the unopened pack.  So, when I heard recently about the 50-for-$20 repacks offered online by Wal-Mart, I grabbed two of them.  100 packs for $40 seemed like a good way to restock my pack stash without breaking the bank. 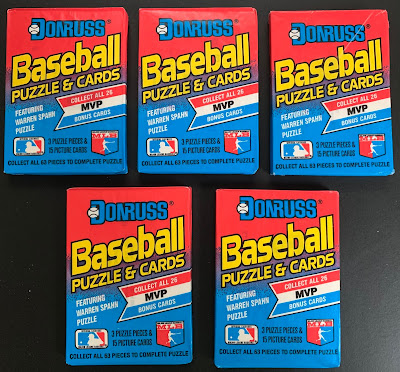 I won't likely post the contents of that many packs here on the blog, but for starters I grabbed five 1989 Donruss packs to rip.  I'll admit that I grabbed these first to "get them out out of the way", but they actually ended up being more entertaining than I'd figured they would be. 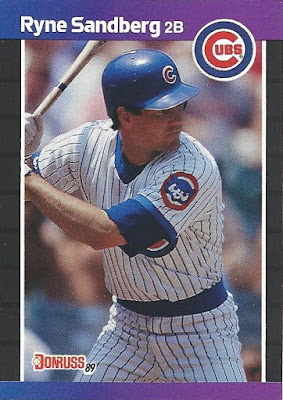 I'm not going to show every common here, just some miscellaneous highlights from across the five packs, like this Ryno. 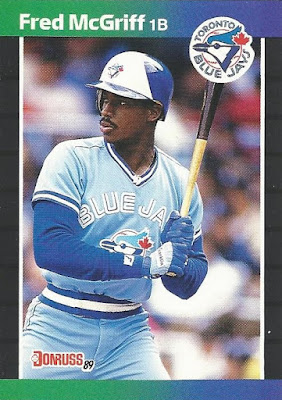 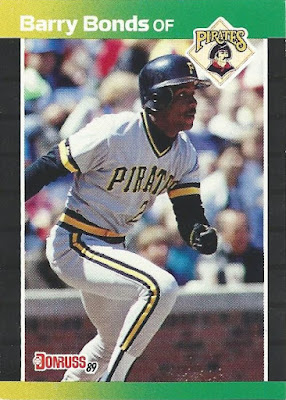 Skinny Barry!  I've really turned over a new leaf collecting-wise when it comes to Bonds.  Years ago I read Game of Shadows cover to cover and got on my soap box about what a jerk this guy was, and how he ruined the game.  While I still think Hank Aaron is the true home run king, Barry doesn't really bother me anymore, and I even kind of enjoy pulling his cards a bit. 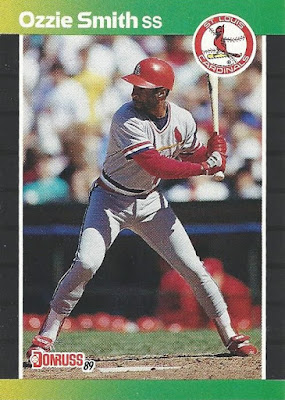 Ozzie Smith was always one of my favorite players to pull back in the day.  As a kid I was enamored by his acrobatic defensive skills. 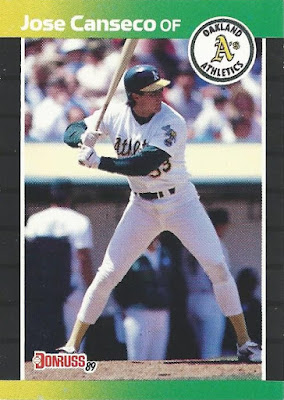 Here's a card that would have been pretty hot back in '89.  I've already got the McGwire from this set, and this completes my Bash Brothers duo.  Side note, if you have a Netflix subscription there is now a 30-minute rap musical by Andy Samberg about Canseco/McGwire.  It looks so random and hilarious; can't wait to check it out.  Anyone seen it already? 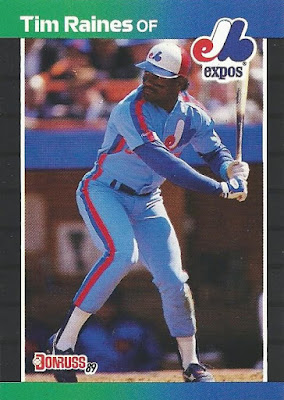 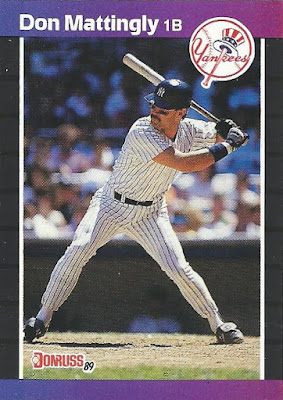 Another one of those stars who was a king of the '80s.  Great cropping of the photograph here. 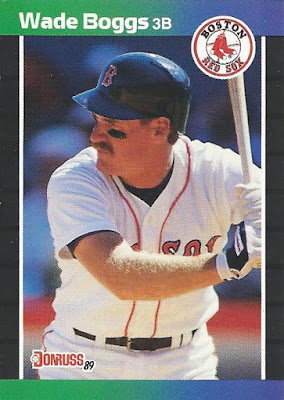 By contrast, a fairly terrible photograph on Wade Boggs' card.  Still, I'll never turn down a new Wade Boggs, provided he's wearing the proper laundry, as he is here. 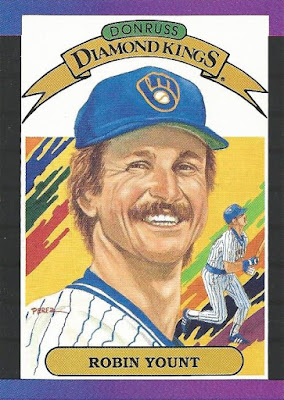 This Robin Yount is the best of the two Diamond Kings subset cards I pulled.  Yount has now appeared on the blog for consecutive days.

It's amazing just how many HOFers five packs of cards yielded. 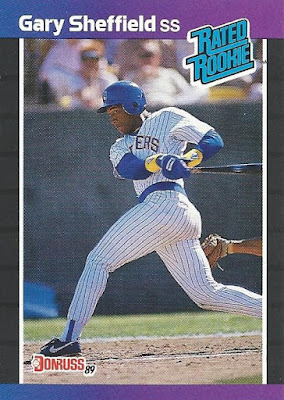 I didn't pull a Griffey Jr Rated Rookie, but I did get a Sheffield! 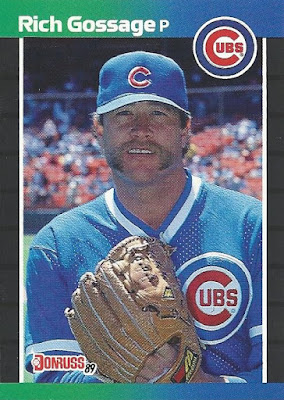 It looks a bit strange that the Cubs patch on Goose's jersey here is an exact match for the logo in the upper right.  Not that surprising I suppose, but just looks odd. 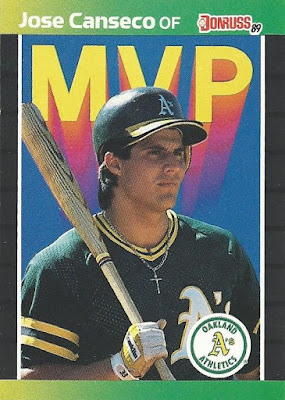 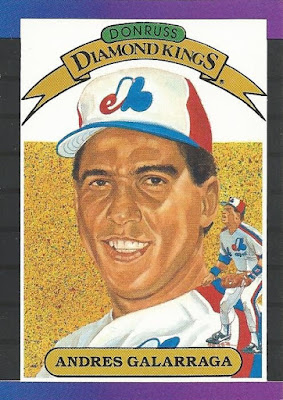 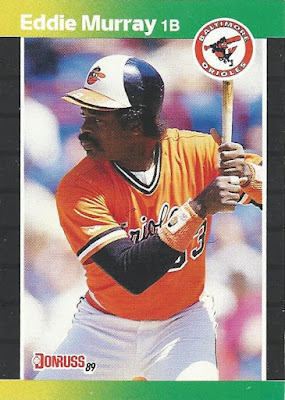 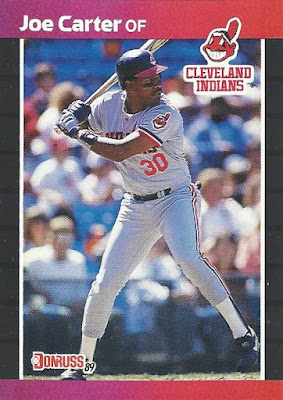 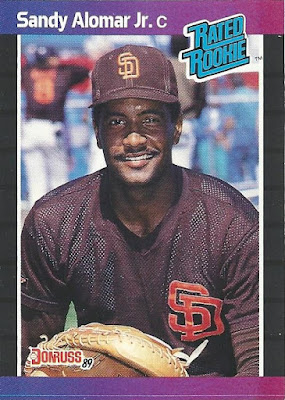 Another pretty solid rookie in Sandy Alomar Jr., who played just a single game in 1988 and won National League Rookie of the Year in 1990.  Sandy had half a dozen All-Star appearances over a 20-year career.  Maybe not good enough for Cooperstown, but certainly good enough to get me to hang onto his rookie card. 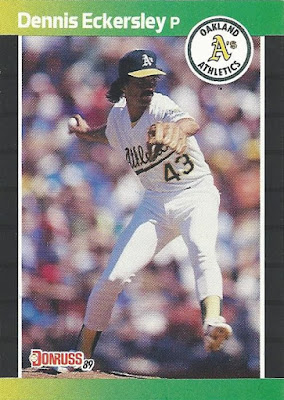 We'll close it out for tonight with one of my favorite current color commentators, Dennis Eckersley.  Man those were some powerhouse teams the A's had around the turn of the decade.

Ended up with 18 keeper cards across those five packs, not too shabby at all!  If this is a sign for how my 100 packs are going to go overall, I'll have no problem getting my $40 of value out of this purchase.  I'll have some more packs from this purchase in future posts, thanks for stopping by!
Posted by shoeboxlegends at 8:53 PM

You got some nice cards from those packs! Have to say this set has grown on me a little bit. Maybe it's the nostalgia factor.

I've always liked 1989 Donruss, even if it is everywhere. I'll be curious to see a breakdown of what you got from WalMart, even if you don't show every pack.

I was originally going to bring all of the 1988 to 1992 packs I received from my Walmart repacks to summer school and hand them out to my students. But then I reconsidered. My students probably won't care about baseball cards... and even if they did... they won't know most of these guys. Their loss is my gain. I'm actually a little pumped to open up the stack of Junk Wax packs I had set aside.

I doubt I'd ever buy one of those 50-for-$20 repacks, but I enjoy living vicariously through those who do!

Nice batch! I think I need most of these for PCs. Funny part of collecting late 80s/early 90s players, when you're missing cards that had a billion copies printed.