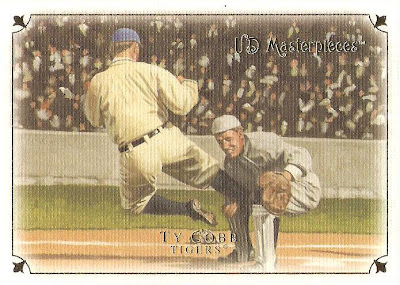 Yes, the title of this post is correct, and I just finished my 2007 Upper Deck Masterpieces set. For some reason I acquired most of this set, then sort of forgot about it and let it fall by the wayside. While it's far from perfect (I'll get to that shortly), it's definitely one of my top 10 favorite modern baseball sets and I was extremely pleased to finish it recently.

The Good: The paintings are beautifully done. Something about the way they are painted (the slightly exaggerated action shot of Ty Cobb above is no exception) really makes me appreciate the history of the game. The large number of Hall of Famers on the checklist is another plus. Even the canvas-like card stock is just so fitting for these cards. A 90 card checklist and no short prints make this set extremely collectible, even for the casual collector, which is something I really appreciate.

The Bad: I guess the number one debate regarding any set featuring some of the best players from baseball's storied past will always be the checklist. In this case though, I don't think any sane baseball fan would claim that Upper Deck got it right. I think they got sucked into trying to take a gamble on some younger stars to make the set more tempting or to appeal to a more widespread audience, but the set suffers as a result.

I can appreciate that some players were included more for their involvement in a single classic moment that is permanently etched in the minds of millions of people, like Kirk Gibson rounding the bases, than they were for a Hall of Fame career. Here are a few examples I'd love to hear someone from Upper Deck defend...
Anyway, onto the goods. Here are 3 of my favorites and then 2 of the worst... 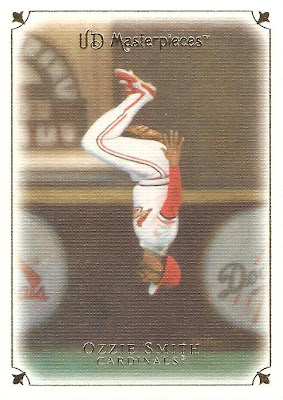 This has got to be one of the coolest Ozzie cards I've ever seen. While capturing him mid-flip would ordinarily be a bit cliche, I think this card is perfectly done. 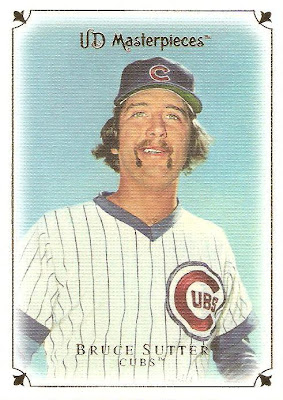 This might be my single favorite painting from the set. The Cubs jersey with the baby blue background, the 'fro and moustache, the lighting. What a nice looking card! 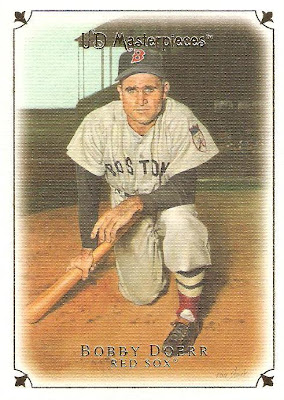 A simple pose from Hall of Famer Bobby Doerr. He seems to jump right off of the card. 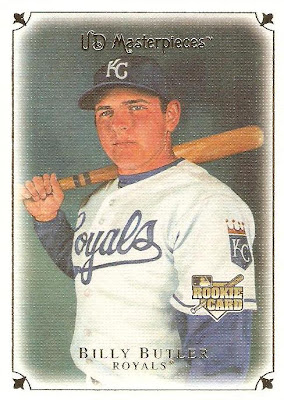 Prime example of a checklist mishap... 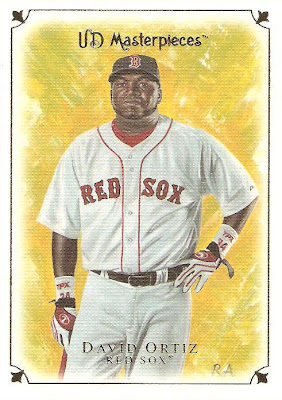 This is the ugliest card in the set hands down. Whoever sat down, looked at this painting, and decided to give it the go-ahead should be fired. The background makes no sense. How about some fans, or the sky, God-forbid a baseball diamond? Any of these would've been preferred over this mess.
You can find scans of all of these cards in the Zistle library.
Posted by shoeboxlegends at 10:00 PM

Congratulations on completing the set

I think some omissions have to do with licensing issues. I know that Mickey Mantle falls in that category.

I think the hits and misses among the young stars gives the set checklist a bit of quirkiness and sticks it in a distinct time period. This set is on my back burner to complete - love the pictures just have not got around to getting a box.

What are you going for next??

Steve, I know you are right about licensing when it comes to Mantle but I wasn't sure about some of the other guys like DiMaggio, Warren Spahn, etc.

pricelesspursuit, I haven't decided what baseball set to pursue next. I really love the Masterpieces sets so I'm going for the 08-09 Masterpieces hockey set next. I've got about half of the set so far and I just picked up a 24 pack retail box on eBay so I'm hoping that will seal the deal!

I liked these cards when they were released in 2007. I especially liked the canvas-like quality of the depictions. It seems to give this modern set a timeless quality. I got hooked on the large 5x7 box topper subsets (20 card black framed unsigned, and 18 card green framed on-card autograph sets). I've been collecting them ever since. I now have the highest PSA-graded sets of both box topper sets. Love 'em.......they're beautiful.

Thanks for the comment usernamealreadytaken. I checked out your sets on PSA very impressive. Not quite as impressive as your 1952 Bowman set. One of my favorites of all time.