With the way the Red Sox have been playing since the All-Star break it's really tough not to start looking ahead to football and hockey season.  Let's do just that, and take a look at one of the more interesting Bruins autographs I've added to my hockey collection, Jarome Iginla: 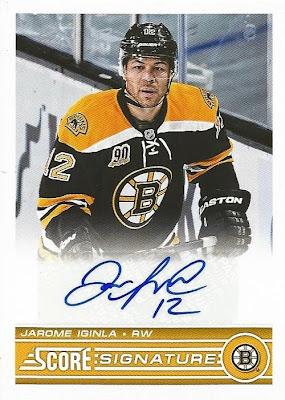 Iginla is simply one of the most effective goal scorers ever to play in the NHL.  He's enjoyed an impressive twelve 30-goal seasons in his career, including 11 consecutive at one point.  That number could easily be at fifteen as well, as he's had two 29-goal seasons and one with 28.  Remarkably consistent, even well into his late 30s, Jarome should be netting goal number 600 this coming season!  He's already inside the top 20 in all-time goals scored, and could conceivably get up near 15th place before he hangs up the skates.

I somehow never knew this, but in writing up this post I learned that Jarome's actual birth name is "Jarome Arthur-Leigh Adekunle Tig Junior Elvis Iginla".  Not kidding at all.  Would be great if he had an autographed card out there where he wrote the whole thing out.

Iginla's time with the Bruins was brief, at just a single season, so I was psyched when I found that this card existed.  He was productive as always in his stint with the B's, scoring 30 goals and adding 31 assists in the regular season, plus lighting the lamp 5 times in 12 playoff games.  I loved watching him paired up with Milan Lucic, and my favorite player at the time, David Krejci. 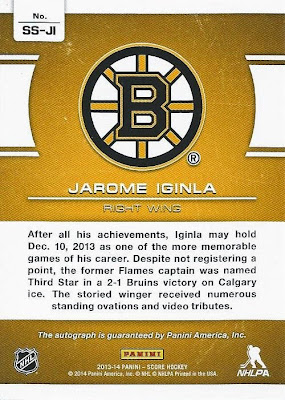 The Bruins got themselves in a bad salary cap situation (don't even get me started), which resulted in some rough personnel decisions prior to this past season.  One of them was letting Iginla go in free agency, they just didn't have the money available to sign him.  The other was practically giving away defenseman Johnny Boychuk to the Islanders.

This off-season has been even worse in my mind.  Lucic was dealt away, which I actually don't mind too much, but to me what happened at the draft is unforgivable.  It's obvious new GM Don Sweeney had something in mind that just didn't pan out, but to pick three consecutive times in the first round is just dumb.

More than anything else, I cannot believe how badly the Flames robbed them in the Dougie Hamilton deal.  I truly think he is going to be a solid top-four defenseman with good offensive elements to his game for a long time to come.  I'm still stunned at how little Calgary gave up to get him.  Look out for the Flames this year.

I'm definitely skeptical about the look of the 2015-16 Boston Bruins.  At least if the hockey season becomes as disappointing as this baseball one has been I'll always have this autograph to remind me of better times...
Posted by shoeboxlegends at 9:32 AM

Oh man, this Bruins off-season has been wild. I'm with you on Lucic; I liked him but he was a bit overrated, so I'm not overly sad to see him go. The Hamilton move was a head-scratcher. With Chara and Seidenberg both up there in years, why deal away a young, top-4 d-man? Especially after letting Boychuk go. I know it has something to do with the cap, but c'mon.

As for the draft; I'll wait it out because, well, because...Patrice Bergeron was drafted 45th and he's great.

I can't add an intelligent comment to the Bruins discussion but it's a nice signature.