Another trade post today, as I make an effort to catch up on the backlog and to give the kind folks who have sent me cardboard the proper thanks they deserve here on the blog.  Today's post is a clear example of how my hobby OCD can set me far behind at times.  Allow me to explain... 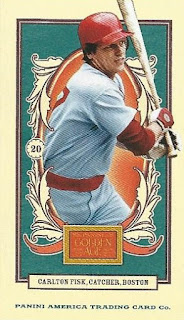 Over the past summer, I received a great PWE of cards from my longtime trading buddy Mark Kaz.  Included was this wonderfully colorful Carlton Fisk mini from 2013 Panini Golden Age.  As is my customary process, I scanned in all of the cards, filed them away in my collection, and stashed the scans away for whenever I could find a few minutes to post them up here.  So far, so good.

About a week later I went to get started, and began with adding this mini to my collection on The Trading Card Database.  Only then did I learn that there were different back variations for these minis, and I'd failed to make a note of which back this card had.  Ugh.

About a month later I had a few minutes free, and remembered that this was holding me up.  I was proud of myself as I grabbed the binder that hosts my Sox minis and checked on this one, making a note that it was a "Carolina Brights" back.  I updated the name of my scan accordingly, and would get back to the post when I had time.

Fast forward a couple of more weeks, I'm not at home but I do have time to write up a post and so decide to get started.  It is at that point that I realize there are not only different backs, but different colors of each type of back.  Next step?  Become frustrated and completely forgot about the entire thing for many months.  This is what the absolute bloat in number of parallels in modern sets has done to me.

But, Mark deserves better than that, so today I'm finally getting around to that PWE, starting with the Fisk Carolina Brights Green Back mini... 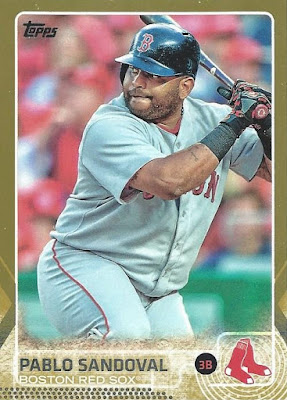 As frustrating as that Fisk was, Mark included some other very nice and much less trying pieces of Red Sox cardboard, such as this Panda Gold card from 2015 Topps flagship.  There's a parallel I can identify very easily.  Already my blood pressure is coming back down. 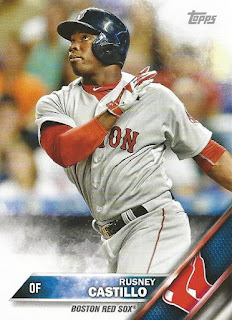 A couple of these mini flagship cards were to be found in the envelope as well; famous contract bust Rusney Castillo... 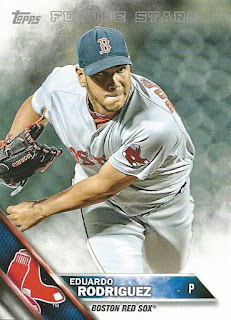 ...and a lefty whom I've always liked, Eduardo Rodriguez.  I think these were online exclusives maybe.  Mark sure finds some interesting cards at the shows he gets to down there in Delaware! 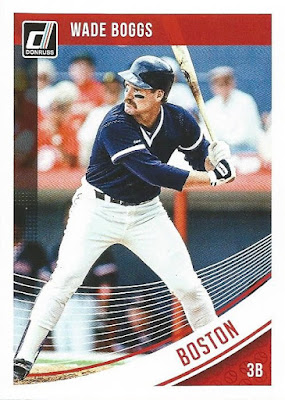 I only feel safe saying this because I've known Mark so long, and I know he won't take offense, but good lord that is an ugly Red Sox card!  However, despite all the progress that I've made in the last year or two in condensing my collection, I still can't turn down any Red Sox card that I don't already own, licensed or not. 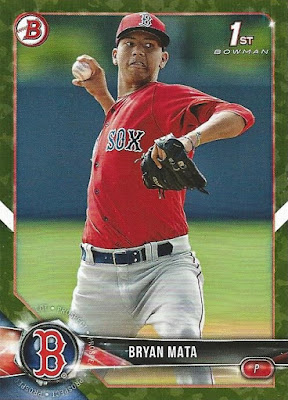 Here's a cool one, just featured the base version of this card in yesterday's post, and now we have the (retail exclusive, I believe) Camo parallel.  Hopefully Bryan Mata turns into a stud in a few years here. 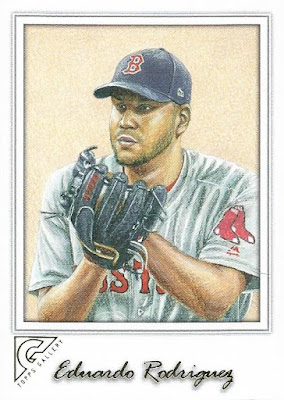 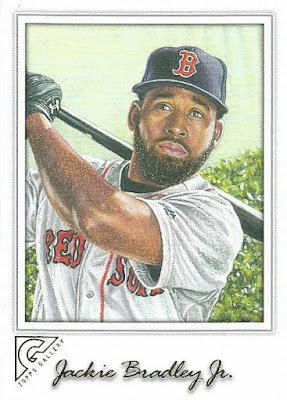 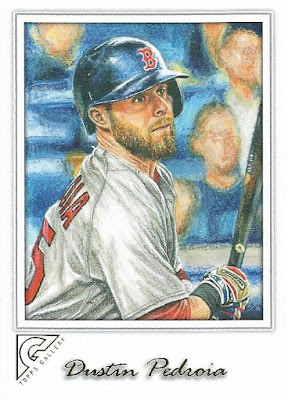 ...and my favorite of the three, Dustin Pedroia.  I like how the artist handled the crowd in the background in this particular drawing.  I can't help but wonder how many more times we'll get to see Dustin take the field in a Red Sox uniform. 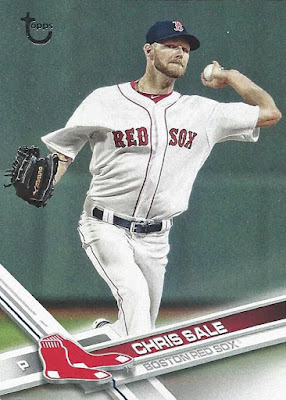 Finally, a card that made my jaw drop!  I really love the "Vintage Stock" parallels that Topps has produced for at least a few years now to my knowledge.  As the name implies, these parallels use a card stock closer to the cards us collectors age 35 and older remember from our childhoods, and they also use the vintage Topps logo on the front.  A really interesting parallel, but the thing is they're pretty rare. 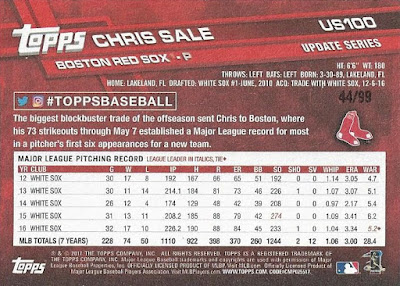 As you can see here, each copy is serial-numbered to just /99.  What an awesome and completely unexpected card.  You hit a home run with this one for sure Mark!

So, there are some wonderful Red Sox cards that are a good 6 months overdue at least.  Are you the hyper-organized/OCD type collector?  If so, can you think of any examples in your own collecting experience where that trait has hampered you like it did to me here?  Would love to hear about it if so.

Right around Christmas I received another PWE from Mark, and I do not plan on waiting half a year to showcase that one here on the blog, I assure you of that!
Posted by shoeboxlegends at 1:00 PM

ACK! Variant frustration. UGH. This reminds me a few days ago I got an IM from admin at the Database telling me that a card I have in my collection recently had been marked as having a new variation concerning the cartoon on the back. It is the 1970 Topps Baseball 303 Brant Alaya Senators and for the cartoon on the back there is apparently 2 variants one variant there is a baseball in the cartoon the other no baseball. Now I need to check the card I have in my PC. I seem to recall seeing a ball each time in the past, but memory can be misleading. I also need to check for duplicates I might have as I have had duplicates of this card before. I just don't recall it I have traded all my dupes away or not.

I'm so bad at recognizing variations. Front. Back. It doesn't matter. I wonder how many times fellow bloggers have sent me a variant and I never realized it... or the other way around. Sounds like TCDB would help me keep track of them, but I'm not ready to invest the time quite yet.

P.S. Love that vintage stock parallel. Now that's something I'd be able to recognize ;)