I really cut back on spending during 2018's Black Friday sales promotion over at COMC last year, because I'd recently landed one or two pretty big, significant singles that I'll show here in the coming year.  I still managed to grab a couple dozen cards or so though, and in fact had enough to assemble one of my patented "COMC Blaster" posts from that weekend's pick-ups alone... 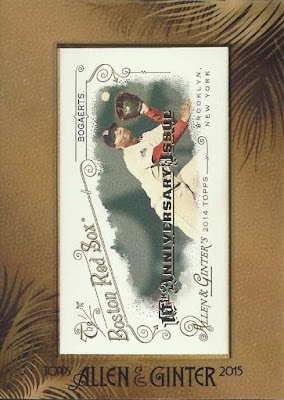 The highlight of today's post gets us started.  In 2015, Allen & Ginter contained buybacks to celebrate the set's 10th anniversary.  Collectors could pull both standard-size stamped buybacks, or framed minis.  I'm not as into these as I am the various Topps flagship/Heritage buybacks, but when I happened upon a framed mini buyback featuring the rookie card of my favorite current player I simply could not resist. 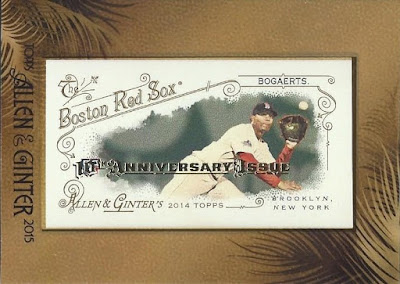 Ah, there we go, looks a little better rotated like this.  I wish Topps would've moved the "!0th Anniversary Issue" foil buyback stamp just a hair lower, since the "10th" is kind of covering up the RC symbol, but what can you do.

While most of my COMC purchases tend to be for pocket change, or maybe a dollar or two, I stepped up to the plate and paid the seller's $7.25 asking price in this case.  That may seem steep to you, but Xander Bogaerts is really the only baseball player that I sort of actively collect, and this is easily one of the more rare and obscure rookie cards I've seen of the Red Sox shortstop.  In fact I had never seen one before, and haven't seen another one since.either.  I don't think Topps released print runs for any of these, but I would not be shocked if this was the only copy of this card in existence.  At a minimum, it's one of the few.

Well, that knocks out more than a third of today's virtual blaster based on price, but let's see what else I was able to add to my collection with the remaining $13 in store credit... 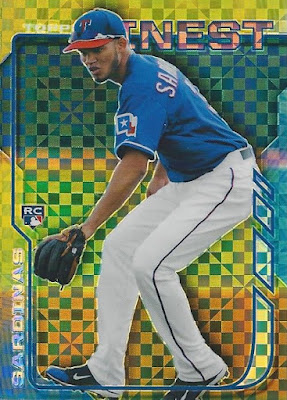 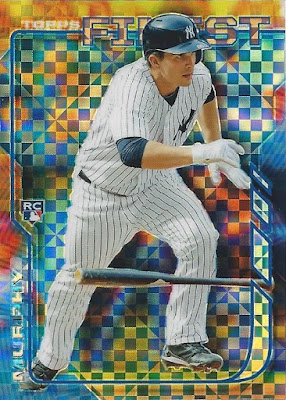 As I've mentioned before, I've decided I'm all in now on trying to complete this 100-card set in X-Fractor format.  JR Murphy here?  Not exactly a household name either, but gets me one card closer for 57 cents. 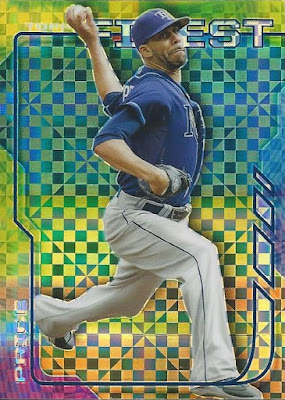 Here's a recognizable name after a couple of duds, recent World Series champion David Price!  55 cents was all it took to add the lefty starter to this project. 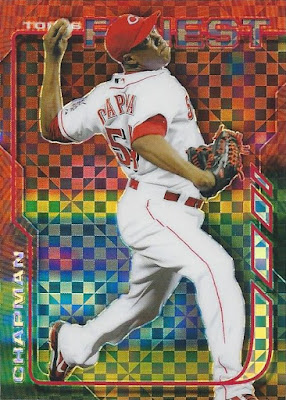 Ugh.  The one downside of set collecting is the "need" to acquire some guys you probably can't stand.  Such was the case with Aroldis Chapman here, but at least he was the cheapest of these that I landed here at 46 cents.  Moving on... 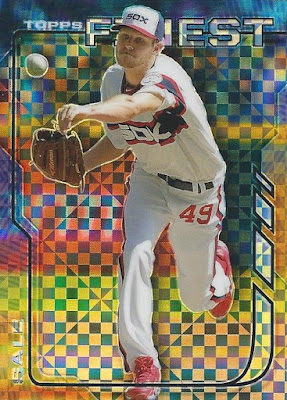 My favorite of today's batch of X-Fractors by far is this Chris Sale, featuring a uniform that I thought was ugly the first time around but that looks kind of interesting amid all this color.  Chris cost me a hair more than the others I'm featuring here, at 74 cents.  I didn't pick up both the Sale and Price cards at the same time on purpose or anything, but it's funny that it worked out that way. 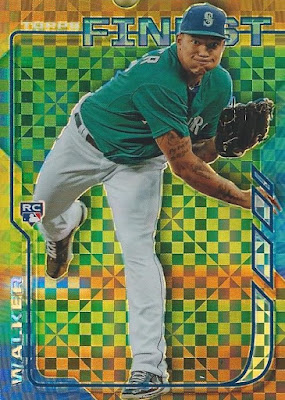 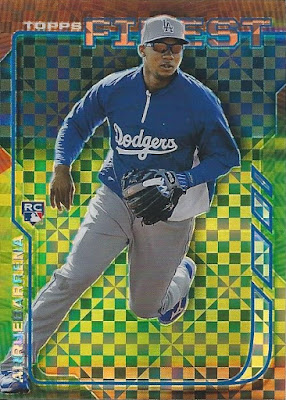 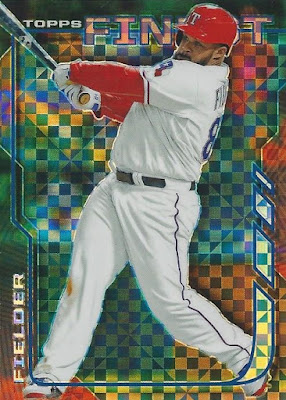 ...and former slugger Prince Fielder for an even 50 cents.  These 8, plus another 5 I grabbed that weekend and already showed in a previous post, really have me getting there.  I'm up to 31 of these shiny beauties now, out of 100 in the set.  That number's a bit deceiving though since I've been nabbing most of the cheap ones and still have names like Harper, Trout, Kershaw and Jeter to go. 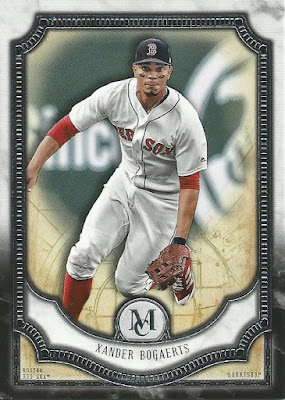 While nowhere near as exciting as the card that led off today's post, I snagged this Museum Collection Xander Bogaerts because it was available for just 47 cents.  Always feels good grabbing cards from somewhat high end releases for mere pocket change. 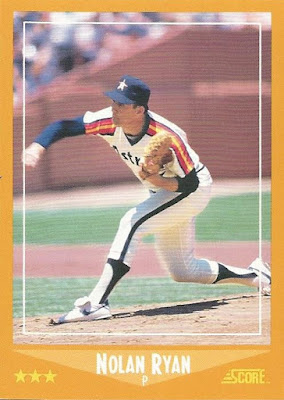 At one point I just searched for cards of players I collected as a kid, almost certainly owned as a kid, but haven't managed to add back to my "adult" collection yet.  Such was the case with this great 1988 Score Nolan Ryan, a nice mint copy is now mine for just 49 cents! 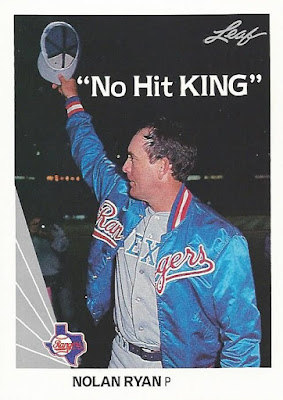 To pair with it, the "No Hit KING" card from 1990 Leaf for 51 cents.  These aren't going to help any with my retirement plans, but at an even dollar for the pair they sure pack a lot of nostalgic fun into my Black Friday package.  Speaking of which... 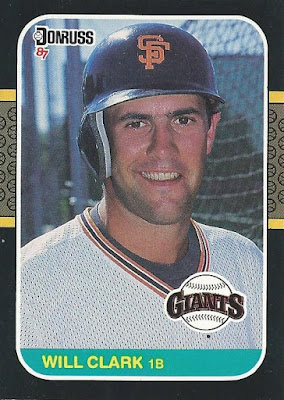 For a while there as a youth, there was nobody that I collected with more fervor than Will Clark.  I had at least a couple of copies of his 1987 Donruss RC back then.  While I grabbed a graded copy of this card shortly after returning to collecting, I never managed to track down a raw one, and I rectified that during this sale for just 49 cents. 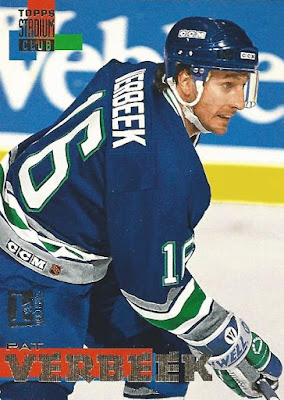 It's been all baseball so far, so how about a couple of hockey cards?  I paid $1.21 for this 1994-95 Stadium Club Pat Verbeek card.  Why would I do that?  Well, if you look along the left border of the card, just above Verbeek's name, you'll see a "1st Day Issue" stamp on Pat's thigh there.

These parallels are one of those cases from the '90s of cards that have really retained their value, and you'd be hard-pressed to find even common scrubs for less than a buck.  Star players can command a pretty penny.  Since Pat is one of the more under-rated players in the sport's history, and since I aspire to one day have the greatest Hartford Whalers collection on The Trading Card Database, I couldn't leave this one behind at a pretty steep discount like this. 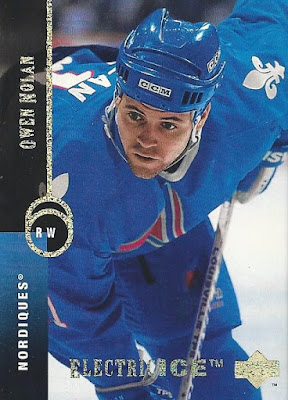 Contrary to the Verbeek, these one-per-pack Electric Ice parallels from Upper Deck have not remained all that valuable, but I always liked the very sparkly foil that Upper Deck used on the ones in the '94-95 set.  Aside from that, I was a big Owen Nolan fan growing up, and I love the photograph here with the great look at the Nordiques' fleur-de-lis shoulder patch.  A nice grab for 53 cents if you ask me. 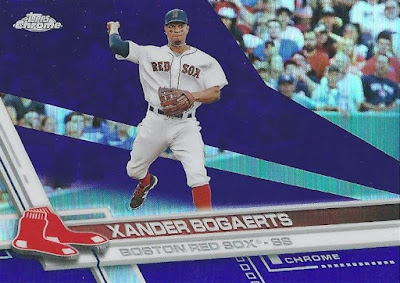 We're heavy on the Xander Bogaerts cards today.  This Purple Refractor from 2017 Topps Chrome is sort of jarring, and I wouldn't count it among my favorite cards, but it's serial-numbered (to /299) and was on sale for just 80 cents.  More than enough to get me to bite on it, increasing my Bogaerts count by another card. 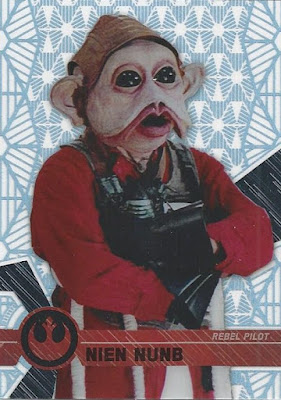 Every so often when I'm bored I'll see what Star Wars cards may be available for cheap coin, and during the promotion I ended up with a pair of them.  Nien Nunb was one of the more memorable bit/background characters from the original films, and on top of that I'm a sucker for all things acetate, so this Topps Star Wars High Tek card joined the collection for 63 cents.  If I were more focused I'd have grabbed another 2014 Finest X-Fractor instead, but where's the fun in focusing all the time? 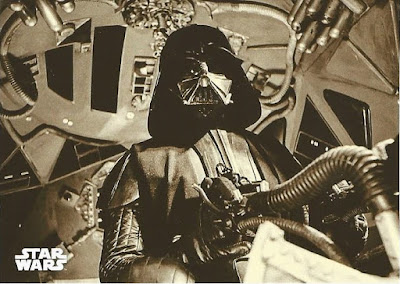 The other Star Wars card I grabbed was from last year's Black & White set featuring scenes from the very first film, Episode IV:  A New Hope.  This one's a Sepia parallel, which I don't really care about.  I just love the full-bleed photo of Vader at the controls, and thought it was a fun card to grab for just 50 cents. 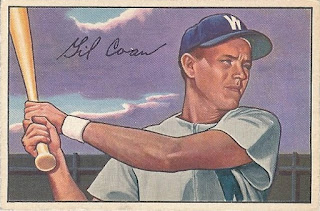 Here's the final card for today.  I've mentioned this enough times now that some of you are probably getting tired of hearing it, but man do I love those early Bowman baseball sets.  As a kid I had two cards from the '52 set that my dad bought me from an antiques store a couple of towns over from where we lived, and they were among my most prized pieces of cardboard.  I actually still have that pair to this day, and in recent years have been looking to add some others from the set when the price is right.  Such was certainly the case with this beautiful Gil Coan, mine for the unbelievably low cost of just $2.88.

I love everything about this one, Gil swinging away in horizontal format in front of a clapboard fence.  Just look at the glorious purples featured in that sunset sky behind Coan.  These cards are truly little works of art, and I could not add this one to my cart fast enough.  I've got 16 of these under-sized beauties in my collection now, and while names like Mickey Mantle and Willie Mays will probably prevent me from ever completing the set, I hope to pick up many more of them during my lifetime.

Well, that takes us to $20.08 as far as today's running total goes.  A shorter post than most of these, due in large part to the fact that the Bogaerts buyback sucked up over $7 in funds, but some great additions nonetheless.  Hope you saw something you found interesting, thanks for stopping by!
Posted by shoeboxlegends at 11:00 AM

I am huge sucker for 1987 Donruss. Nice COMC package!

Always enjoy these posts. Early Bowmans can be fairly bland and run together in my mind, but that Coan is definitely a gem.

I'll never get tired of hearing it... because I totally agree with you. Early Bowman rules! Love the 90L No Hit King Ryan too! Damn does that card bring back memories.