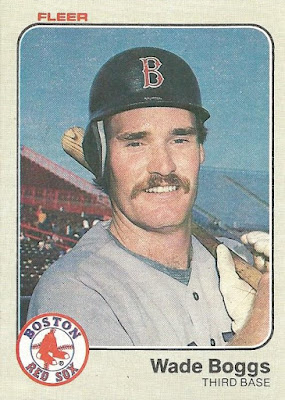 Wade Boggs is arguably the best hitter, almost certainly the best contact hitter, to play for the Red Sox during my lifetime.  His cards have always been reasonably priced though, I guess hitting for average just isn't as glamorous as crushing home runs.  Fine by me, as it made it very affordable to pick up his three key rookie cards in the time since I've returned to collecting, one of which is the '83 Fleer card pictured above.

Well, I've mentioned this a few times recently, but as time goes on I find myself less and less interested in modern cards.  Conversely, I find myself more and more interested in cards from my youth and earlier.  One of the things I've been pursuing specifically is copies of iconic cards of the '80s graded mint 9 by PSA.  I'm not sure what it says about me, or about the current state of the hobby, that I'm more interested in spending my limited hobby funds on graded copies of cards I already own raw, but it's where I'm at.

Back in November I snagged one such card off of COMC for what I felt was a real steal: 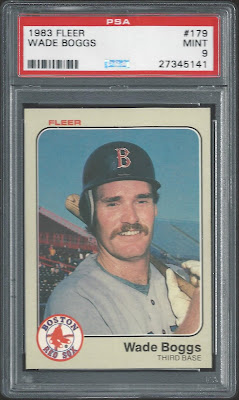 Yes, Wade's 1983 Fleer rookie card is now in my collection in slabbed format as well.  Judge me if you'd like, but I was pumped to grab this one when the seller accepted my best offer of $9.75.  Yes, you read that right.  A mint, graded rookie of a first-ballot HOFer for less money than a couple of hanger packs from Target would have set me back.  I'd take this card at that price every day of the week, and twice on Sunday! 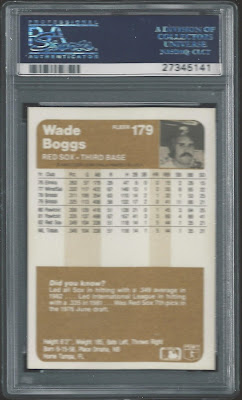 Excuse the fuzziness, I continue to struggle with getting crisp scans of the backs of PSA-slabbed cards.

I couldn't be more pleased with this pick-up, especially at the price point.  I'll continue to be on the lookout for mint graded '80s bargains, and in fact I have a couple more already in hand that I'll be sharing in the coming weeks leading up the baseball season here.

How about you?  Have you ever picked up a graded copy of a card you already owned in raw format just because you like the card that much, or found a real bargain?
Posted by shoeboxlegends at 1:30 PM

I've really never understood the grading thing, but to each their own! I'm still on the hunt for that Boggs rookie, I have his '83 Topps but would love to track down the '83 Donruss & Fleer on the cheap to complete the trifecta.

Yup. Bought a PSA 10 copy of the 1983 Donruss Diamond King card of Rickey Henderson today... after I saw the card featured on The Shlabotnik Report this morning. I probably have 5 copies of that card... and now graded version.