Happy New Year everyone!  2019 will be the 12th full year of operating this blog, which seems amazing to me.  Time truly does fly by.  Let's get right to it and start off the year with one of my favorite types of posts, 2019's first "COMC Blaster"! 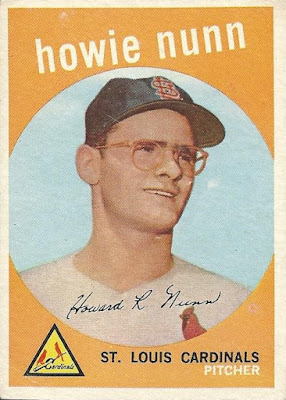 I suppose it's fitting that the first card to be shown on the blog this year is from the 1959 Topps set.  After very slowly plodding away at this one for years now, I finished 2018 with 292 cards from this set in my binder, good for just a shade over 50% complete.  Hopefully that number will be quite a bit higher after the next 12 months, and I start down that road here with a nice, tricky high number at $1.75. 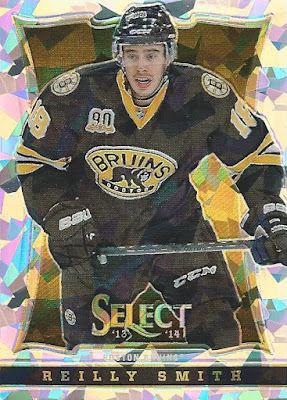 Here's a cool one.  As an admitted sucker for all cards shiny, I couldn't resist this Reilly Smith, which I believe was a giveaway at a big convention show up in Canada at the time.  This is a "Cracked Ice" parallel from Panini, which I basically equate with an Atomic Refractor in the Topps realm.  These days Reilly is skating with the Vegas Golden Knights.  $1.25 for this one. 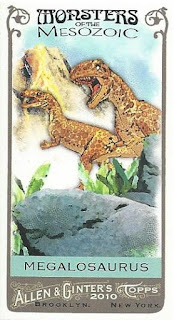 Yup, more dinosaur cards.  Still plugging away on the Monsters of the Mesozoic mini insert set from 2010 Allen & Ginter.  Megalosaurus... 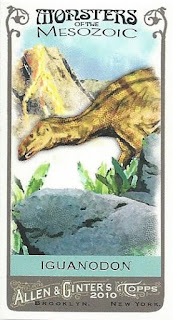 ...and Iguanodon bring me past the halfway point for this 25-card set, for a combined cost of $.98 for the pair. 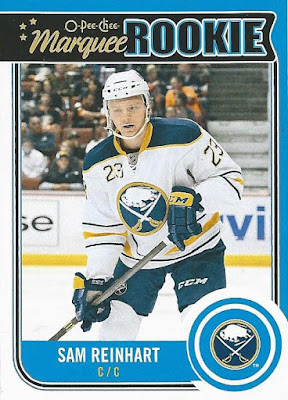 I picked up this O-Pee-Chee "Update" rookie card of Sam Reinhart a year or two back and just plucked it now from my card chest for posting.  Sam hadn't done much at the time, but he was a high draft pick and wasn't exactly surrounded by a ton of talent in Buffalo.  This season he's really hitting his stride, along with the rest of the Sabres.  He's already tied his career high in assists, and the season is only half over.  91 cents for this card. 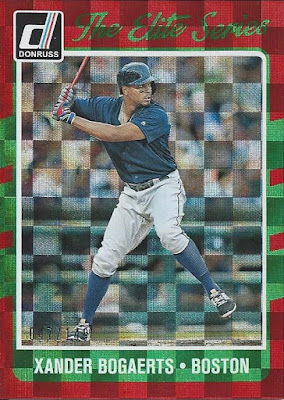 I'm not overly fond of unlicensed, logo-less product, but given what I said above about shiny cardboard I wasn't leaving this one behind for $1.25.  This red parallel version of the card is numbered to /149.  My Xander Bogaerts collection gets a wee bit better today.  To the Red Sox front office...please DO NOT TRADE HIM! 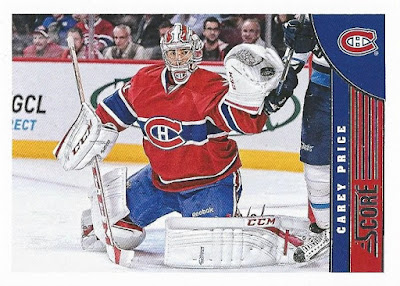 In what was probably the least efficient use of funds of any of today's cards, I paid 99 cents for this base card of Habs netminder Carey Price from 2013-14 Score.  Why would I do that?  Well, I'm just a few cards from completing this monster of a set, and I'm determined to do so in 2019, that's why. 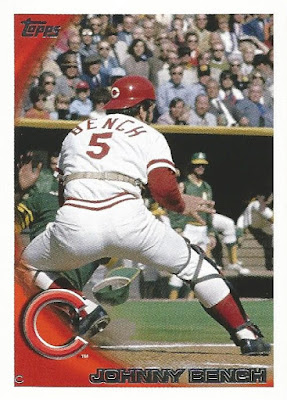 I will never tire of the retired legends short prints that Topps has been doing for years now.  I don't recall ever having seen this particular Johnny Bench from the 2010 set before, so I snapped it up when I ran across it for $1.54. 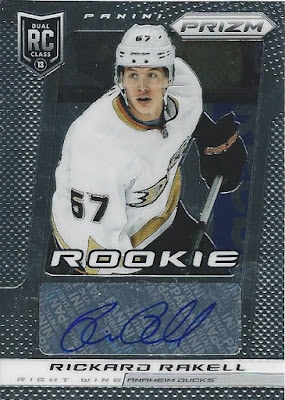 Here's a cool one.  I don't post many autographs in these posts because I don't buy them as often as I used to, and because I don't typically buy them via COMC when I do.  I grabbed this one of winger Rickard Rakell of the Ducks years ago because I love Panini Prizm, because it was cheap at $2.50, and because I felt he was probably going to blossom into a star.

Seems like a good pick-up in retrospect, as Rakell has been improving with age.  In the last three seasons he scored 20 goals and 43 points, then 33 goals and 51 points, then last year 34 goals and 69 points. 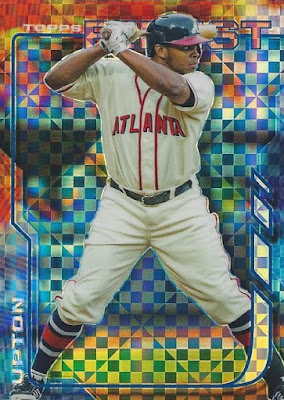 One card closer in my quest to complete the 100-card 2014 Finest set in X-Fractor form.  Upton cost me just 49 cents, and gets me to 23/100 as far as this set goes now.  I'm pretty confident based on the backlog I know I have of these that I'll be able to get to the halfway point in 2019 anyway. 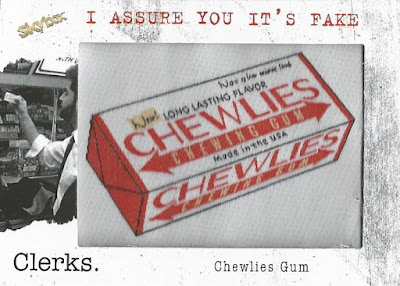 This one's really fun.  Like many from my generation, I enjoyed the early Kevin Smith movies, especially Clerks and Mallrats.  When I learned about these "Fake Relic" cards from the Skybox Clerks set via The Chronicles of Fuji, I knew I wanted to seek one out.  My favorite of the bunch was the Chewlies Gum relic, and there was one available for an even dollar.  Done deal! 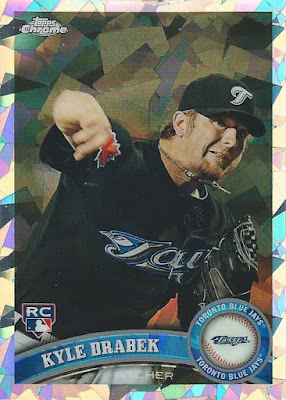 I'm really getting there in my seemingly impossible quest to complete a set of 2011 Topps Chrome Atomic Refractors.  Kyle Drabek here represents my 185th one, out of 220 on the checklist.  With just 35 to go I can just barely start to see the light at the end of the tunnel, however I know of at least 4-5 that I'm still missing that I've never encountered even once before.  $1.10 for this one. 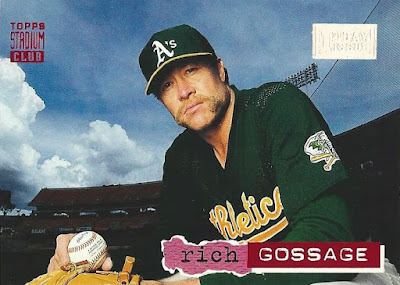 Love the photo used on this Goose Gossage 1st Day Issue parallel from '94 Stadium Club.  These were king when they came out 25 years ago.  While big names still command a pretty penny, you can certainly find some bargains these days.  This one set me back a dollar on the nose, not bad for a HOFer if you ask me. 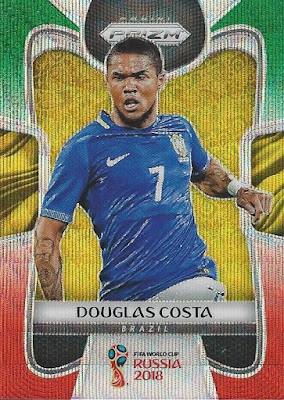 I've mentioned this a few times, but I truly enjoyed last year's World Cup, and the accompanying Panini Prizm set.  While I'm not all that familiar with Douglas Costa, who plays for Brazil, I sure do like the colored "Wave" parallels, and this one was low hanging fruit in the months following the tournament at 65 cents. 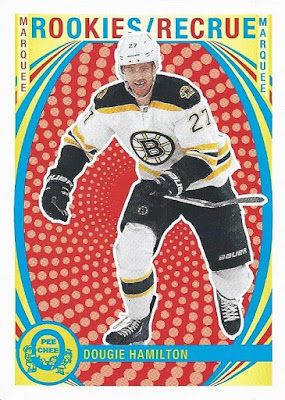 File this one under "purchases I probably wouldn't make today".  I bought it a couple of years back for $1.15 because Hamilton was one of my favorite young players on the Bruins, and I really enjoy these very loud and bold Retro parallels from O-Pee-Chee.  It's not that I don't enjoy the card, but I have so many higher priorities with my collection that I wouldn't shell out a dollar plus for this one nowadays. 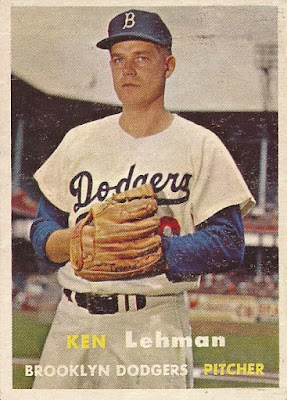 Here's a small mistake I made.  Snagged this Ken Lehman because I really love vintage Brooklyn Dodgers cards, and because it seemed like it was in great shape for the $1.50 asking price.  It was only when scanning and "officially" adding the card to my collection for this post that I realized I'd already picked up a copy a while back, and from COMC no less.  D'oh!  Oh well, I don't think I'll have a terribly tough time finding someone who's interested in my duplicate in this case. 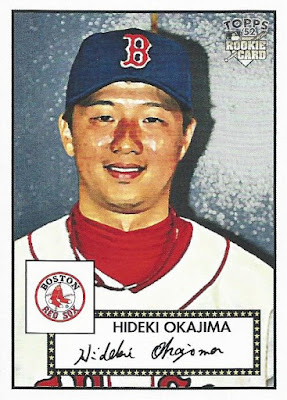 Here's one that doesn't excite me all that much, but was a cheap enough addition to my Sox collection.  I enjoyed Okajima's unconventional release during his long tenure in the Boston bullpen, and thus couldn't resist grabbing this rookie card for a mere 50 cents. 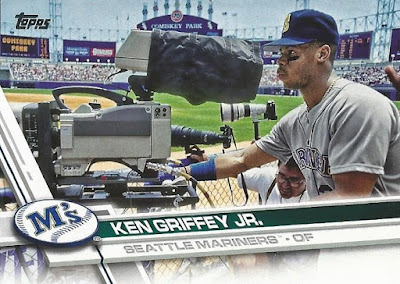 Last card for today, and probably my favorite photograph of any card featured in this post.  While I don't buy many modern baseball cards nowadays, I truly enjoy the short-printed legends variations as I mentioned above.  They're not as hard to come by the past couple of years as they were in the early going, and so Junior here only set me back $1.30.  Griffey was at the absolute height of his stardom during my most formative years as a baseball fan, so it was pretty much impossible for me not to like the guy.  In my humble opinion, this is one of the better photographs I've seen on any Griffey card, period.

That brings the running total for today to $19.86, so we'll call it there.  I hope you enjoyed my first "COMC Blaster" of the year.  Looking forward to another fun and interesting 12 months in this hobby of ours.  Thanks for stopping by!
Posted by shoeboxlegends at 2:27 PM

Happy New Year to you as well!

That is a fantastic Johnny Bench card.

Great pickups as always. The Goose and Griffey are very nice, and that Rakell auto is sharp. Good investment there. Also I'm impressed with your '59 Topps progress.

Since you have an extra Lehman, would you be so kind as to set it aside for me? I have a PWE with your name on it, containing some cards for your buyback frankenset. Just give me a week or two to get it to you.

Glad you learned about the fake relics on my blog... because I just learned about that awesome Bench card here. I absolutely love any card that involves the 1972 World Series. Headed to COMC to see if I can grab an affordable copy. Happy New Year!