Signature Sundays - A Pair of '89-90 Defensemen

Time for the first Signature Sundays post of 2019, and we're going to begin the new year much like we ended the last one, with progress on my small 1989-90 Topps/O-Pee-Chee autograph project! 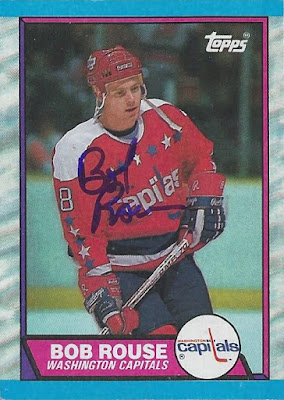 Bob Rouse was a "defensive defenseman" who carved out a good long career for himself at the NHL level.  He's probably not best remembered as a Washington Capital, given that he had longer stints in three other NHL cities (Minnesota, Toronto and Detroit).  Rouse and the Caps had a good season in '89-90 though, advancing a couple of rounds into the Stanley Cup playoffs.

What I like the most about this one is the great look that you get at Washington's very bright sweaters at the time.  Since these were the ones they wore when I first got into the sport I've always been partial to them, and I've been pleased to see the present-day team sport these a few times in recent years. 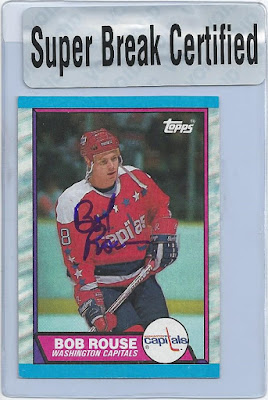 This is actually one from that "Super Break Certified" release that came out a while back.  I'm really not sure how legitimate these are, but they sure make for a fun way to grab common names for this project at a cheap price point.  I don't get the impression that there are a lot of folks out there forging Bob Rouse autographs anyway.  I certainly felt comfortable taking a risk on it for $1.99 with free shipping. 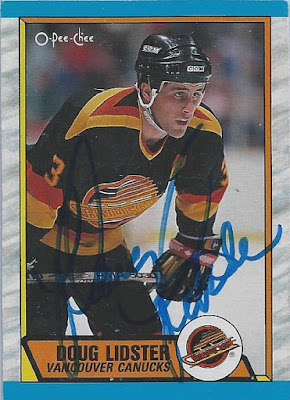 Here's the other half of today's D-pair, Doug Lidster of the Vancouver Canucks.  Though Doug played longer with Vancouver than with any other professional franchise, I have a feeling there are an equal number of New York Rangers fans who are equally fond of him.  That's because Lidster was a member of that treasured 1994 Stanley Cup winning team, and even contributed an unlikely pair of goals in the Finals! 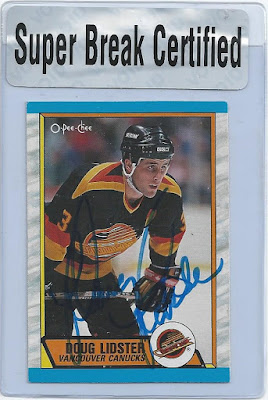 This one was also from the Super Break Certified release, picked up from the same seller as the Bob Rouse.  I was again the only bidder at $1.99, with free shipping.

So, two new names added to this project for less than a cup o' coffee at Starbucks.  I'll take that any day!  For those of you who collect hockey cards, have any of you picked up autographs from this release?
Posted by shoeboxlegends at 10:30 AM

Nice additions to the 89/90 auto set build. I would have to believe these are legit. Can't imagine D&A Card World using their name on a chance these are real. With that said, I have a bunch I've added to my autograph collection. You may even be seeing some more soon.

Both those signatures are legit!

I remember Rouse when he was on the Sharks way back in the day. And that 89/90 autograph set project is cool. Do you happen to have the Greg Hawgood rookie from that set? Just curious. I've been trying to add a signed rookie card of his to my collection for years.