Recently I received yet another stellar package of cards from my longtime hobby friend Douglas, who writes at Sportscards from the Dollar Store.  Quite frankly, I have no idea what I did to in any way deserve the kindness that Douglas has shown me again and again over a period of many years now.  He is truly one of the more generous people that I've encountered in all the time since I've returned to the hobby. 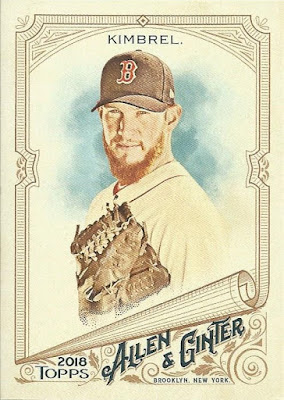 This latest delivery was large enough that I'm going to have to break it up into a few posts for ease of ingestion.  I believe there were over 100 cards in the mailer in total, which is especially impressive given what postal rates are like these days between the US and Canada. 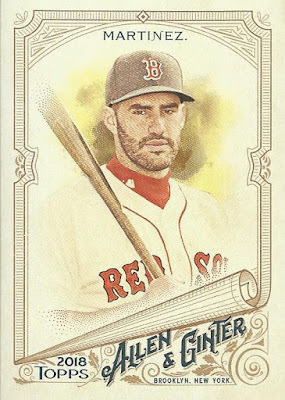 Today's post is going to cover a couple of complete Red Sox team sets that were to be found, the first of which is 2018 Allen & Ginter.  I love that over the past month or two, and thanks solely to the generosity of other collectors, I've finally started adding some J.D. Martinez Red Sox cards to my collection. 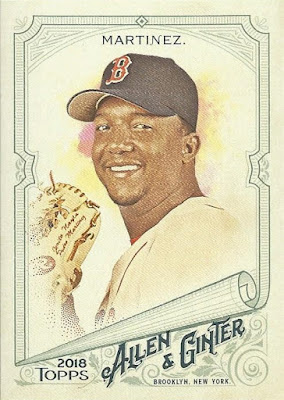 This batch was actually my very first in-hand look at the 2018 Allen & Ginter offering.  I used to pick up a few packs of this stuff each year, but I've all but completely sworn off retail wax for a good long time now. 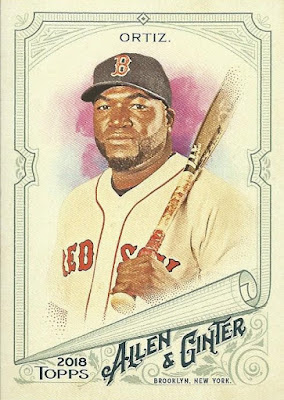 I like the design overall.  The rolled up scroll element along the bottom border has an air of 1962 Topps to it if you ask me, and that '62 release is one that has grown on me considerably as the years have gone by. 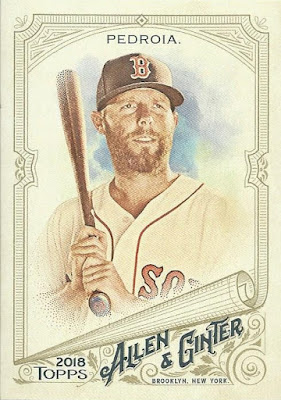 Dustin Pedroia was technically a member of the 2018 World Series championship club, but barely.  You have to wonder if his chronic health/injury issues may have him hanging up the spikes soon.  Certainly a guy that you could see remain in the game for a long time in a coaching capacity if you ask me. 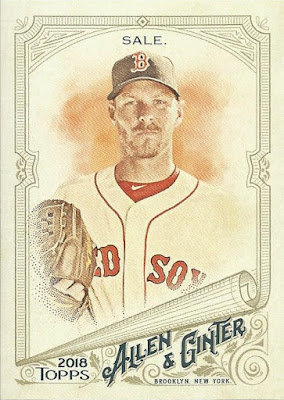 Douglas' package included 15 Red Sox cards from this release, and I found when I went to add them to my collection on The Trading Card Database that this actually constitutes a complete team set. 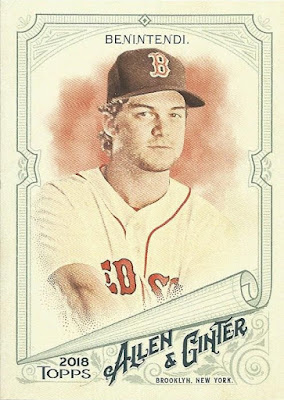 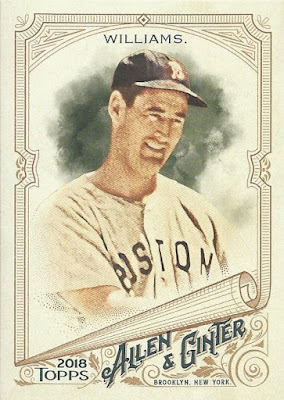 ...and legends of old.  Is it just me, or does this image of Ted Williams look a bit more "washed out" than the other cards in the set? 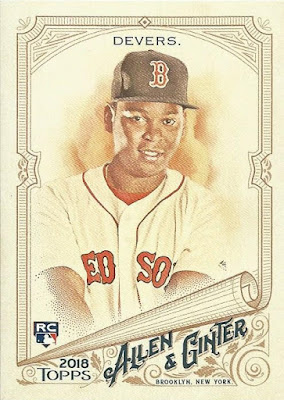 This is the first of a few Rafael Devers RCs that were included in this delivery. 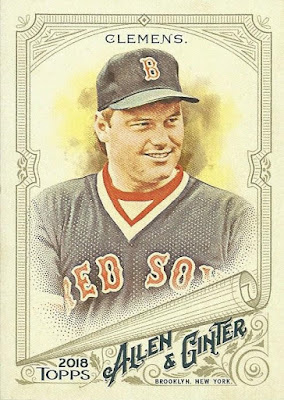 I like the very dated jersey on this Roger Clemens card. 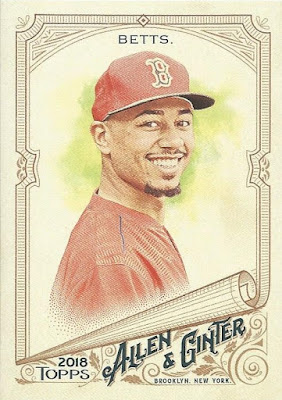 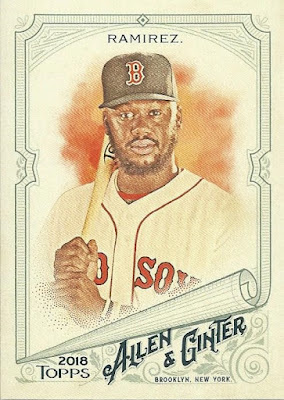 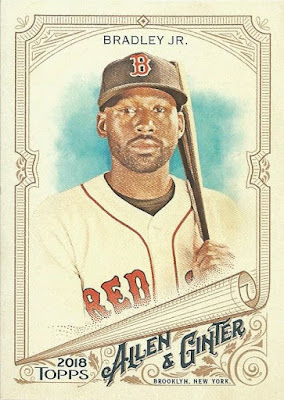 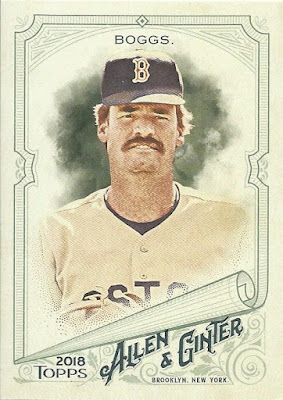 As far as retired legends, it's your usual suspects here in Williams, Pedro, Ortiz, Boggs.  How about some more obscure names, Topps? 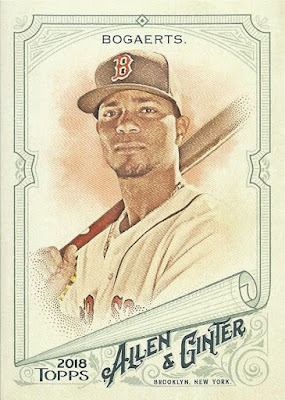 The last card on the checklist is a new Xander Bogaerts card.  Looks like a Red Sox mega-collector joined The Trading Card Database on Christmas, and has since surpassed me as far as the largest Bogaerts collection on the site.  Not by a little bit either, they've got more than twice the number of Bogaerts cards that I do at present.  Challenge accepted! 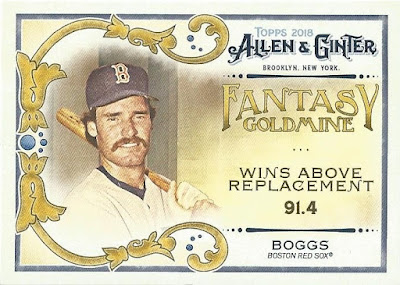 As if a complete team set wasn't generous enough, I got two cards from what I believe is the release's largest insert set, Fantasy Goldmine.  Familiar names here with another Wade Boggs... 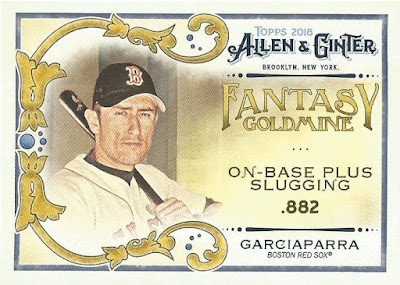 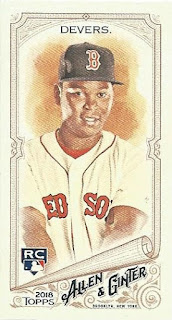 Rounding out the Allen & Ginter portion of the package was the Devers RC in mini version.  I really grew to love mini cards once I acquired the appropriately sized binder sheets for them a few years back.  I've got a whole section of a binder with all my Red Sox minis just randomly paged, and they sure are a lot of fun to flip through.  This one's already snugly in place. 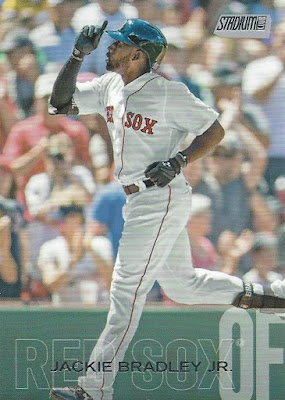 The other set that Douglas did serious damage to with this latest package was 2018 Stadium Club.  Again, I purchased none of this myself.  My only exposure was a handful of cards that I received in a package from my friend Kin a few weeks ago. 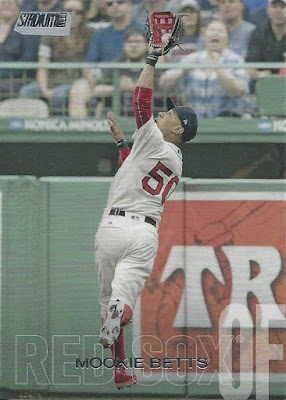 Well, Douglas knocked out a complete team set with this release as well.  Unbelievable. 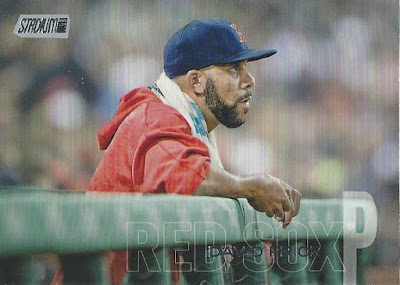 I'm not sure if this is common across the entire set, or if it just so happened to play out this way for the Red Sox cards, but an inordinate percentage of them seemed to use the horizontal layout. 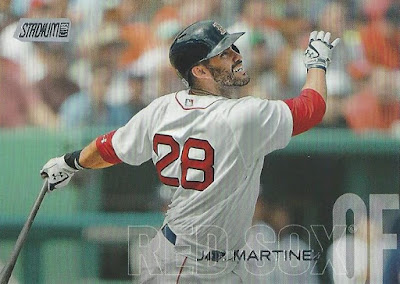 I think Douglas just about doubled the number of J.D. Martinez Red Sox cards I have in one fell swoop with this delivery. 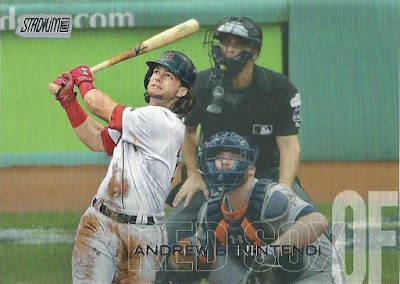 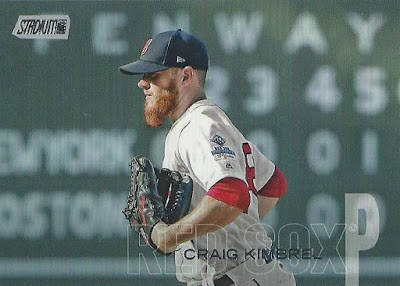 I love the way this photograph is framed, just a shame that the Stadium Club logo itself blotted out the 'F' in FENWAY on the scoreboard.  Still a nice card though. 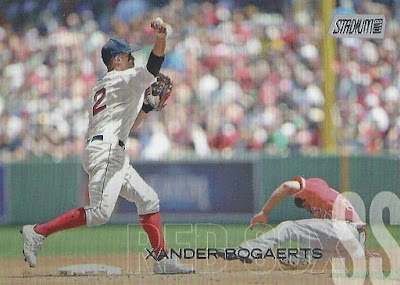 Another card closer, I will regain the top spot someday! 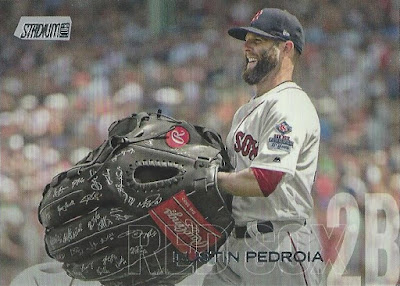 I always got a kick out of the gimmicky over-sized glove cards, and Pedroia's in this set is no exception.  Makes me snicker every time I look at it, definitely one of my favorite cards that I've seen from this release. 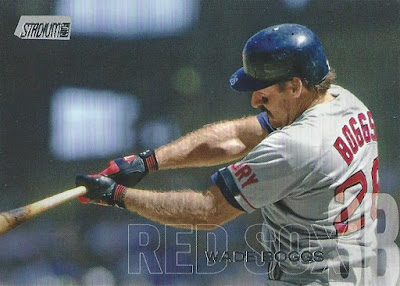 A lot of Boggs in today's post, that's for sure. 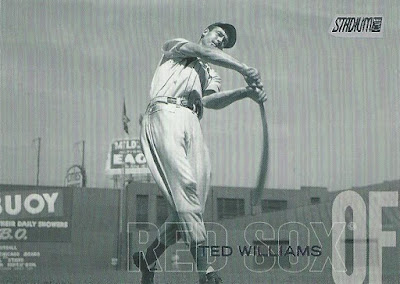 Finally, what I would consider the most visually appealing card, at least as the Red Sox go, from this Stadium Club set.  I didn't get into trying to pick a card of the year for 2018, I don't pick up nearly enough new product to have a qualified opinion on the matter.  If I had though, there's a strong chance this would have been it.  An absolute stunner of a photograph of the Splendid Splinter.

Well, I think that's more than enough content for today.  I'll have at least one, maybe two more posts up to get through all the goodies that Douglas sent my way.  Until then, thanks for stopping by...
Posted by shoeboxlegends at 2:30 PM

Great cards! Especially the Williams Stadium Club with Section 36 behind him.

Betts and Stadium Club are a beautiful combination.

I've never been n A&G fan but I love the Sox cards in this year's Stadium Club.

Some nice cards there... I need to up my game with Stadium Club (and I've flagged that Pedroia "Giant Glove" card as a want).