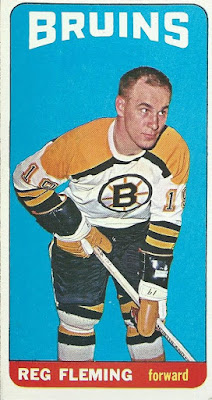 Why?:  I adore the 1964-65 Topps tallboys.  Despite being just 110 cards deep, the set is deceptively hard as it contains quite a few very short-printed cards that regularly go for hundreds of dollars in just about any condition.  A checklist alone could be quite an adventure.  So, I just take the approach of grabbing cheap examples on the rare occasion that I encounter them over the years.  That approach has worked well so far, as Reg Fleming here represents my 15th card from the set.

Fleming was known as a tough customer who played with a lot of grit, and was a fan favorite in many of the cities where he spent time during his 20-year professional career.  The back of the card features some evidence of this, as the cartoon mentions Reg setting an NHL record for most penalty minutes in a game! 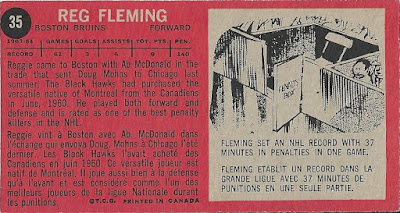 Posted by shoeboxlegends at 10:30 AM

Beautiful set. I'm way too impatient to build a set one card at a time... but I truly am envious of collectors who can. Best of luck with this project!

I picked up my first card from this set in October. I got lucky- it's in almost perfect shape and only cost me $5. Doubt I'll ever complete it but I'm happy to have the set represented in my collection- and it's my only card of the player, too.

Nice card; I'd be happy to do like Billy did and just get one affordable card so that I can say I have a card.

Fantastic card! I hope you're able to collect a few more of these tallboys.