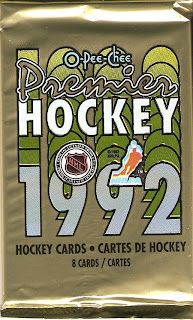 Maybe I'm biased, I played ice hockey year round for over 12 years growing up. It's a shame to me that the sport continues to struggle. It's fast paced action with a good mix of brute force and extreme skill. In what other sport do the referees back away and let a couple of guys go at it for a minute or two before breaking up the fight? It's funny, I never see much hockey coverage on SportsCenter, but on any given day if you watch the top 10 plays at the end of the show you're bound to see a couple of ridiculous goals or miraculous saves. But I digress...

The point of this post is to display some fine cards from a recently purchased wax box of 1991-92 OPC Premier hockey. Hockey card collectors know that OPC Premier's first hockey offering the year before caused quite a stir in the hobby. So what did O-Pee-Chee decide to do? Grossly overproduce next years set. I purchased my 36 pack wax box on Ebay for about $5. At 8 cards per pack and only 200 or so cards in the set you are almost guaranteed a full set from the box. The thing I learned about this set is that the backs of the cards are the highlight. Check out these gems: 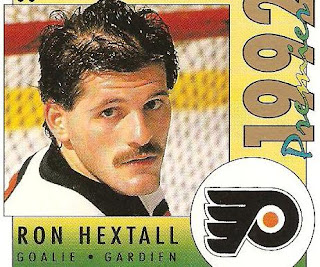 Yeah, Ron's looking at you... Any time I pulled a Ron Hextall card growing up I would instantly say "Hey, I got that goalie who scored a goal!". I had no idea he had a softer side. Slicked back hair? Check. Suggestive stare? Check. Moustache that lies beyond the peach fuzz realm but has not quite reached full growth? Check. It's pretty clear that Ron must've been popular with the ladies back in the early 90's. 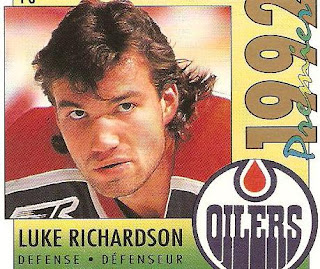 Here Luke Richardson is displaying what I consider to be your classic mullet. All the necessary trademarks are there. You could make the case that the flowing wisps coming out just above the ears prove that this is simply a man who hasn't had a haircut for a while. A close examination though of the difference in length between the hair on the top of Luke's head and the flowing locks extending out over his jersey will put to rest any doubt. 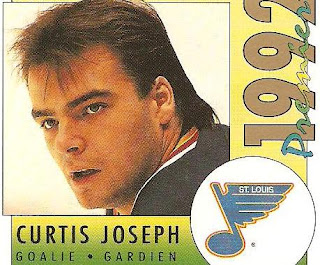 Cujo is sporting a variation on the classic mullet on this card. It's so defined that you can almost see his comb-strokes projecting backwards on the side of his head. For variation, he's added what almost looks like bangs in the front. Pathetic... 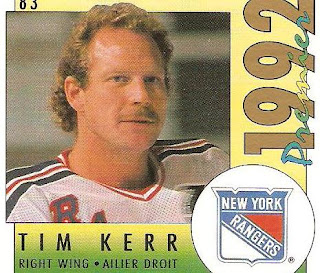 Tim's variation on the mullet is as curly as Cujo's is straight. This thing looks like you could bounce a quarter off of it. Extra points here for the mullet-fro/mustache combo.

Unfortunately, the stars of the game were not above these ridiculous haircuts. Check out this dynamic duo from the Penguins. Is there not a barbershop anywhere in Pittsburgh? 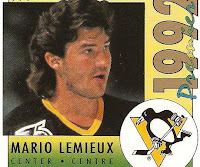 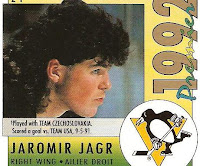 And now for what I consider the two highlights of what I've opened so far: 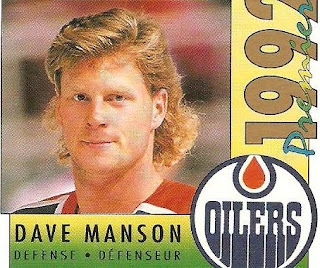 Dave Manson must not have a true friend in the world. Any real friend would never let him walk out his front door (much less to a hockey arena packed with thousands of people) with this God-awful disaster on top of his head. 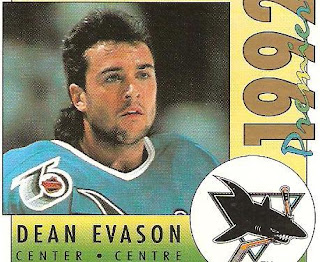 Dean is the cream of the crop in my opinion. When I was flipping through the cards to decide what to scan I very nearly passed him by. A quick glance behind his ear would lead you to believe the hair stopped there. Only when you see the gigantic bush appearing behind his neck to you realize the true ridiculousness of this cut. This is not business in the front, party in the back. This is fortune 500 CEO in the front, and frat house kegger in the back!

Next time you're about to blow $60 on a hobby box of the latest product just remember how much fun you can have with $10 and an Ebay account.
Posted by shoeboxlegends at 7:22 PM

"In what other sport do the referees back away and let a couple of guys go at it for a minute or two before breaking up the fight?"

I guess I should've gone with "In what other sport where fighting is penalized do the referees..."

By the way Bruce, your blog is awesome. I've been reading back through all of your old posts for over an hour, great stuff.