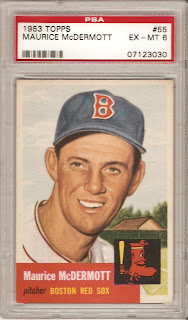 #55 - Maurice McDermott - Boston Red Sox
Unfortunately, if you had to summarize Maurice "Mickey" McDermott's life in a few words, you'd most likely go with something like "promising young pitcher who never realized his full potential and eventually became a complete drunk". Even so, I've always had a soft spot for Maurice McDermott for one reason. Collecting cards as a kid, I had only two truly "vintage" cards in my small collection. One of them was a 1950 Bowman Maurice McDermott purchased at a local antique shop. Although I knew virtually nothing about him (you couldn't exactly Google someones name back in 1990), in my eight-year-old mind I had built him up to be larger than life, a hero on the mound. Turns out I wasn't entirely accurate...
Mickey had his first major league tryout at age 13, for the Brooklyn Dodgers. When he was signed by the Boston Red Sox at age 15, part of the negotiations included two truck loads of Ballantine Beer for his father. Talk about a simpler time in the game, no need for high priced agents and media coverage, a few thousand bucks and some truck loads of beer settled this one.
After an interesting career in the minors (including throwing a no-hitter in which he lost), McDermott finally broke into the majors in 1948, appearing in a mop up duty role a few times before eventually being sent back down. He would get his first start with the Red Sox when fellow teammate Ellis Kinder was pulled after an inning because he was too drunk to pitch. I'm starting to see a pattern here, maybe Mickey was doomed to become an alcoholic.
Here we see him on the cusp of his greatest season, a 1953 campaign in which he would go 18-10. Eventually drinking became a problem for McDermott, ending his career and causing problems in his personal life. He hung up the cleats with a 69-69 career record and never really developed the skills he exhibited as a youngster.
Turns out he released a book shortly before his death in 2003 called "A Funny Thing Happened on the Way to Cooperstown". The guy was a huge drinker, by many accounts a great storyteller and personality, and was friends with people like Satchell Paige, Mickey Mantle, and even Jack Kerouac! I just picked up a copy on Amazon for $5. I can't wait...
Posted by shoeboxlegends at 7:52 PM

Sounds like a great book... I'll have to check it out.