Rant from a Set Builder 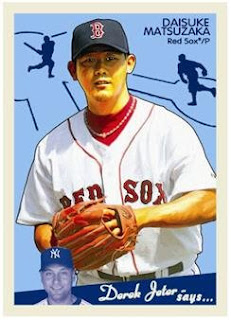 I know I'm not the first person to make this complaint but there's something I really want to vent about. I'm sure you've already read the reviews of the upcoming 2008 Goudey release from Upper Deck. Well, the 2007 Goudey set was the one that got me back into collecting last year after being away from the hobby since childhood.
As someone who enjoys vintage cards, I thought last year's Goudey release was the perfect blend of a modern day set with a vintage feel. For those of you who don't know, there were 240 cards based off of the 1933 Goudey design (200 base and 40 short prints) plus another 48 short prints with the look of the 1938 Goudey heads up cards. I thought Upper Deck did a great job with the set, there's a pretty good basic description of the set that can be found here.
As much as I like ripping packs or getting "the big hit", at the end of the day I would consider myself a set collector. Rather than buying a few random packs of every new product that hits the shelves, I identify a couple of sets that I really like the look of and try to concentrate on those. There's something I like about sorting the cards, coming up with lists of needs and doubles, and then scouring eBay and local cards shops as well as arranging trades for the cards I need to finish the set. Sure, I cave in to temptation and stray once in a while, but I try to show some self-restraint and narrow the scope of my collection (I still haven't purchased a single pack of 2008 Heritage). I've been working on the 2007 Goudey set for over 8 months and I'm still about 40 short prints and a handful of base commons away from completing it, but it's been a fun process. I'm really looking forward to the day when I slide the last short print into my binder!
With that being said, I understand that variations and short prints have become somewhat of a necessity in order to drive sales and the hobby in general. Although by nature they make completing a set much more difficult and much more expensive, I'm willing to deal with them to a certain degree. It annoyed me that Upper Deck created a green back and red back version of all 200 base cards in the 2007 Goudey release. You're left with the choice of ignoring the back color and ending up with a set that looked crappy in a binder, or collecting 400 base cards instead of 200. I chose the latter and was willing to deal with it because I loved the set. However, I don't like the direction the hobby is headed in general with respect to short prints and variations.
I've already been scared away from 2008 Heritage because of this. In my opinion, something is wrong when you can bust 3 or 4 wax boxes of a product, end up with triples and quadruples of certain cards, yet still be nowhere near completing the set. What's so satisfying about pulling a short print anyway? There's nothing different about the cards usually, and most of the time you don't even know the card is a short print unless you consult a pricing guide or checklist. They exist simply so that you have to buy more and more product to complete a set.
I'm very disappointed that Upper Deck has decided to include more short prints in the 2008 Goudey set and also make them harder to find. I was initially psyched to hear that Upper Deck was coming out with another Goudey release, but now I'm just flat out disappointed. I guess I'm old fashioned and out of touch with the modern card collector's wants. Like Cardboard Junkie said in his review, who wants a product that you'll literally need to buy 3 cases of just to complete a set? I don't care about short prints, one of ones, autographs or any of that. Sure it's fun when you pull a card like that, but why can't a major card company release a vintage-themed set with a standard checklist at a reasonable price? I would even be willing to pay a premium price if the chances of pulling each card were the same. Maybe I'll just go back to working on 1980s sets. Sorry Upper Deck, but one thing I won't be spending any money on in the near future is 2008 Goudey...
Posted by shoeboxlegends at 10:49 AM

Despite my initial rant on this set, I've done a 180 on it. If you look at last year's set, it's the Diamond Stars style base set plus the '38 Goudey tribute. Knock out the Sport Royalty (which I wasn't able to collect last year anyway due to scarcity) and the Presidents and you have the same things: a base set in the style of 34 Goudey and a tribute to '36 Goudey.

Since I know I cannot resist the '34 goodness, I am going to collect the '34 set and the '36 set only. The presidents and Royalty cards I'll trade or sell (well, I might keep Teddy Roosevelt if I pull him) and only focus on the actual baseball Goudey cards. Look at the set that way and it's actually an *easier* set to complete than last year since there are 38 less short prints. A Hobby Box and a couple blasters should knock out most of the common set and then it's time to hunt for SPs on eBay.

I can't agree more with your frustration with short prints and buying triple the volume to complete a set. And I really hate it when the short prints are rookies guys that no one has heard of and who won't get another card next year. It's getting harder and harder for me to pick current sets to build.
They should make the base set easy to get in a couple boxes plus or minus a few cards and maybe make some or all of the inserts short printed so then you could get a complete set and choose whether to go for the other stuff in addition.

Thanks for the comment GCA! I still feel the same way about the majority of modern sets, although dayf's comment did give me a fresh perspective on '08 Goudey specifically. Thanks for reading!