Happy New Year everyone! Nine cards left in the 2011 Top 20 Under $25 countdown. Today's card is another autograph: 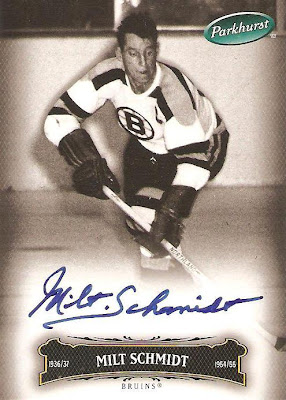 After typing up this post, I realized that I ranked this card way too low in the countdown. In fact, I should've considered making this card #1. Oh well, not going back now.

To say that I was excited to grab this card for less than $10 would be an understatement. Milt's name may not be instantly recognizable to the casual, modern-day NHL fan living outside of New England, which is a shame, but he's one of the most significant and successful individuals in Boston Bruins history. His life story is pretty amazing, actually.

Milt dropped out of school at age 14, and took an 18 cents an hour job at a shoe factory to help support his family. He continued to play Junior hockey though, and eventually the Boston Bruins acquired the rights to his team, making him and his pals Woody Dumart and Bobby Bauer property of the B's. He would get the call up to the Bruins in 1937, and along with Dumart and Bauer formed one of the most famous lines in Boston history for roughly the next decade and a half. In 1939 they brought a Stanley Cup to the city of Boston. The next season his 52 points were the most of anyone in the NHL. Then in 1941 Milt led the Bruins to another Stanley Cup.

At this point Schmidt, along with a few teammates, enlisted in the Canadian military, an act more admirable than anything he had accomplished in skates. He would miss three seasons in the prime of his career as a result. Milt returned to the NHL in 1946 and didn't seem to miss a beat. Before retiring to take over coaching duties in 1954, he would be named team captain, and even capture a Hart Trophy as league MVP. 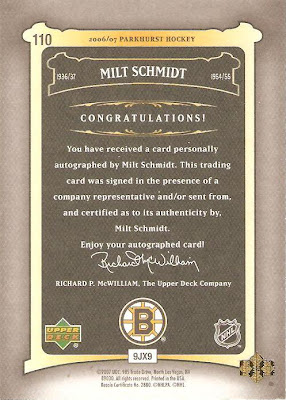 Schmidt would coach the Bruins for an uneventful 11 seasons before eventually becoming the organization's GM in 1967. It was in this position that he would achieve even more success. Milt was the architect of the dominant Bruins teams of the early 70s, including the Stanley Cup-winning 1970 and 1972 teams. He was responsible for flat out robbing the Blackhawks of Phil Esposito, Ken Hodge and Fred Stanfield. Milt was inducted into the Hockey Hall of Fame in 1961. His #15 was retired by Boston in 1980. In October, 2010 the Bruins honored the 75th anniversary of his signing with the team on Milt Schmidt night, an event I was lucky enough to be present for:

A 92-year-old Milt was in great spirits as he was joined by other Bruins legends on the ice before the game, and he even raised his own jersey to the rafters at TD Garden. As luck would have it I ended up in the box right next to the one reserved for Milt and his family, and I was fortunate enough to speak with him briefly and shake his hand.

Being able to meet someone who played for the Bruins in the 1930s, once led the NHL in scoring, was captain coach and GM, won the Stanley Cup and served in the military during the middle of all of it was pretty special. Milt Schmidt is certainly a class act.
Posted by shoeboxlegends at 10:40 AM

Any time you see Milt on TV, he always comes across as really genuine.

Congrats on that one.

Awesome card and an awesome dude.

He was just signing at a show nearish me but I couldn't make it because of work. They were only charging $13 for his signature which is absurd when a guy like Seguin commands $85.

Any background on why Bobby Bauer doesn't seem to have appeared on any Parkhurst, Topps or O-Pee-Chee cards during his career (only Beehive)?

Aaron, that's a very good question. I'm not entirely sure why that is! Now you've got me interested though, probably not an easy thing to research but I'm going to try...