Have you ever ended up completing a set that you had no intention of collecting? That's what happened to me with 2008-09 Fleer Ultra hockey. I picked up maybe a dozen packs of this stuff in total, but only because the hobby shop where I would occassionally stop for supplies at the time was completely bereft of hockey cards save one hobby box of this stuff.

I had long since moved on to other sets when Sal of Puck Junk offered me a large stack of these, probably a good 2/3 of the base set, when I was unloading some of my 08-09 O-Pee-Chee doubles off to him. Had this been a baseball set I would've passed, but I'll take absolutely any hockey card I don't already own. When I combined the cards I already had with what Sal sent along, I realized I was only 20 or 25 cards away from the base set, so I picked up the missing singles on SportLots. I'll show off a few choice cards here: 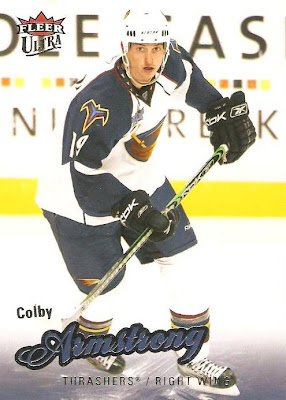 #3 - Colby Armstrong - Atlanta Thrashers - I chose to feature this card because it illustrates my number one gripe about this set. Nearly all of the player photos are boring, light skating shots like this one, cropped very closely in on the player. They look like they were taken during warmups, and very will might have been. Quality photography is a must for me with modern sets, and Upper Deck flat out missed the boat with this one. I guess they were saving most of their good shots for their flagship base set... 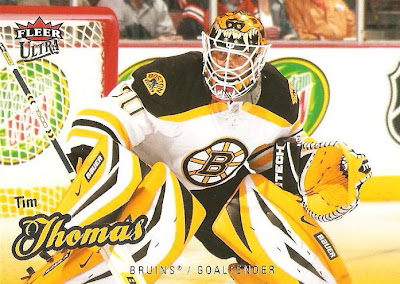 #9 - Tim Thomas - Boston Bruins - Now here is a nice looking card! The yellow last name really goes nicely with Thomas' yellow pads, and even the yellow on the boards behind him. He's got an intense look in his eyes. Plus, I had to include at least one Bruins card in my review for Captain Canuck! 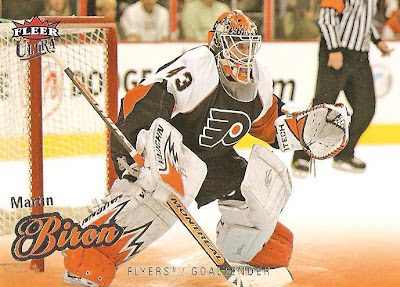 #68 - Martin Biron - Philadelphia Flyers - In case you can't tell, I'm a sucker for horizontal goalie cards. I really like the depth on this one, with the entire goal frame in view and the referee in the background. 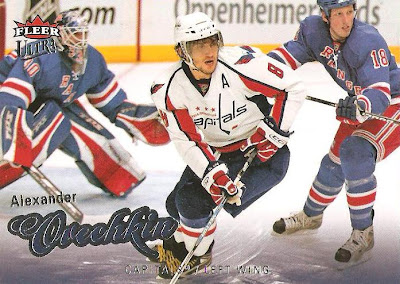 #96 - Alexander Ovechkin - Washington Capitals - Alex gets one of the handful of non-goalie cards in the set that actually depicts a bit of action! Had the whole set looked like this I might've actually completed it on purpose. 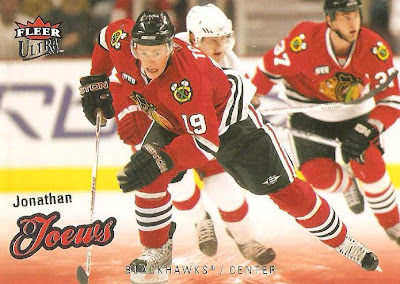 #121 - Jonathan Toews - Chicago Blackhawks - This is probably my single favorite card from the entire 200 card base set. You can see the determination on Toews' face as he streaks down the ice ahead of his opponents and teammates. 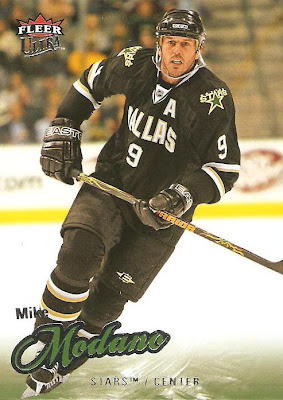 #142 - Mike Modano - Dallas Stars - Another tightly-cropped, boring shot. I'm showing this one for a reason though. The reason is... 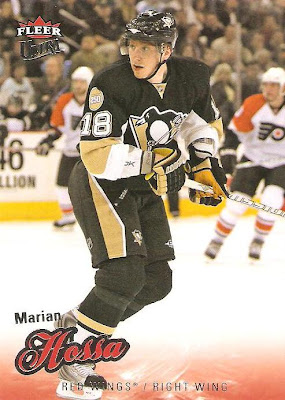 #142 - Marian Hossa - Detroit Red Wings - Yes, that's right, Mike Modano is card number 142. Marian Hossa is card number 142. This is incredibly annoying. In fact, there are two different #46's, two different #132's, and two different #142's. Not only that, but there is no card #65, no card #113 and no card #167. It evens out so you still end up with 200 cards in the base set, but Upper Deck loses major points in my book. Fortunately for you if you plan on collecting this set, I've sorted through the mess and populated the Zistle library with the entire correct checklist, including full color scans of all cards. 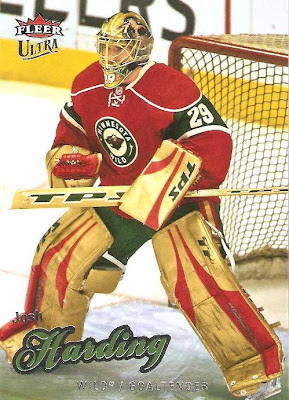 #168 - Josh Harding - Minnesota Wild - Finally, Josh Harding gets shown because the color of his pads give them a kind of retro feel.

Well, that's pretty much all there is to say about 2008-09 Fleer Ultra. I didn't plan to collect it, but I'm glad to have it nonetheless. Special thanks to Sal for the large stack of cards that made me decide to go for it!

Posted by shoeboxlegends at 1:00 PM

that intense look in Tim Thomas' eyes is because he just realized that the puck is already in the net, and he missed it. Again.

congrats on the set completion though... that is one set that never made it up this far north.

What a messed up set. I had to search the internet to see how many card #s got doubled up and if any were left out. How does that happen to three cards in a set? Reminds me of 90-91 Pro Set.

I have the Ovechkin oversize. How much is that worth?