So my last couple of baseball posts have been of a pretty negative nature. I figured it would be a good time to be a bit more positive and show off one of my favorite additions to my collection from 2009. When Topps Heritage came out earlier this year I thought the cards were great, no big surprise there. I made the decision right away that I wouldn't chase the set though, I don't need another 75 short prints to spend months going after and likely give up on in the end. I've got more than enough half-completed-but-given-up-on sets as it is.

So, I decided to spend the money I would've dropped on a hobby box of '09 Heritage on actual 1960 Topps cards instead, since my collection was pretty bare from that year. I spent more than half of the budget on a single card, this PSA-graded Stan Musial: 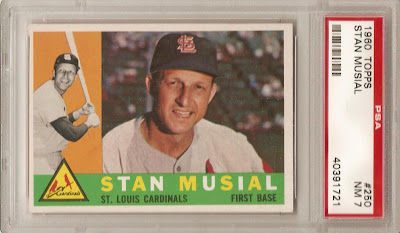 Graded cards were what got me back into collecting initially, and while I've really cooled off on them, have sold a good chunk of them off, and now generally prefer non-graded cards, I will still occasionally pick them up when it comes to vintage cards of star players. I've always wanted a 1960 Topps card of a Hall-of-Famer, and this Musial fits the bill perfectly. This is my first real Musial card from his actual playing days, and will be a prized part of my collection for many years to come.

Best of all, I nabbed it cheap enough that I still had about $25 left from what I would've spent on my hobby box, and was able to add a couple of dozen commons in pretty decent condition as well. I may have missed out on Topps Heritage, but I feel pretty good about getting a start on a vintage set that would be a lifelong goal to complete.
Posted by shoeboxlegends at 11:00 AM

that's nice right there... wish I had did that with Ginter.

My father bought me a lot of 200 different 1960 cards for my 8th grade graduation in 1980. I've been working on the set off and on ever since. I have 70 cards left to finish the set. It's a nice set. Most of the cards I have left are high numbers so it might be tough to finish this one.

Don't blame you for being proud of that one. Who doesn't like Stan Musial? It's hard to ignore some of the fun new sets (A&G etc.) but adding in some great vintage cards is a good idea. Any card(s) you regret selling?

Thanks for the comments.

Hackenbush, I haven't really regretted selling any cards yet, although I did just unload a 1976-77 Topps "Tall Boy" basketball card of Dr. J. That was probably the hardest one to let go of so far, but the fact is I just really don't collect basketball and would rather have the money in my PayPal account for the upcoming hockey releases...