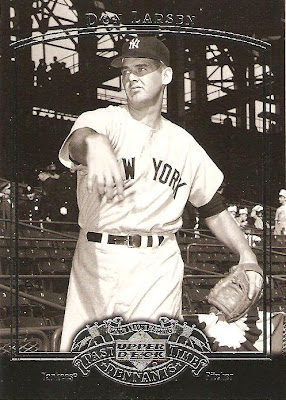 Everyone knows Don Larsen as the only pitcher in history to throw a perfect game (or even a no-hitter for that matter) during the World Series. Overall he was a mediocre journeyman pitcher, so his name is forever associated with the gem he threw on October 8th, 1956. As a kid who spent a lot of time with his head buried in baseball statistics and books, I was always aware of this fact, but I never really gave it much thought until recently.

Only 18 official perfect games have ever been thrown, and to pull this off on baseball's biggest stage is beyond impressive. It's even more impressive when you consider that Larsen was no superstar prior to this, and had been lit up pretty well in game 2 of the series, just a few days earlier. 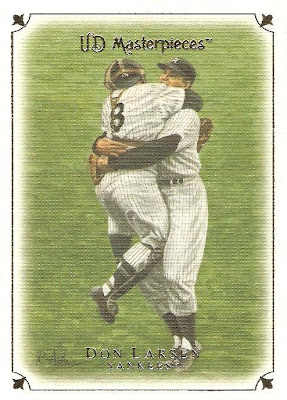 Here's the iconic image of catcher Yogi Berra leaping into Larsen's arms after the final out, courtesy of 2007 Upper Deck Masterpieces. A couple of other interesting facts that I didn't know until recently:

Until recently the two cards above were the only Larsens in my collection. I decided to rectify this and recently won this one on eBay: 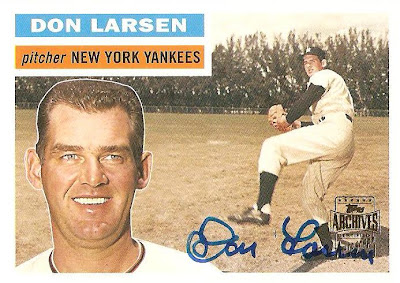 I'm very excited to add this card to my personal collection. This is from the 2003 Topps All-Time Fan Favorite set, and of course depicts Larsen on the '56 Topps design. To me, this is a piece of baseball history and something I will enjoy for the rest of my life, as this very card was held and signed by the only man to throw a World Series perfect game. Not bad for $8 plus shipping huh?
Posted by shoeboxlegends at 11:10 AM