A recent post by Captain Canuck on goaltender Gary Simmons got me thinking about the California Golden Seals, so I decided to dig up a few from my collection: 1973 Topps #95 - Golden Seals Team - The Seals franchise became a part of the NHL in 1967, one of 6 expansion teams added that year. They would remain in the NHL throughout the 75-76 season, after which they relocated to Cleveland to become the Barons. In their first year they were simply known as the California Seals, then until 1970 were the Oakland Seals. For their final 6 seasons though they were known as the California Golden Seals. This beat up card from the 1973-74 Topps set is the only Seals team card I own I think... 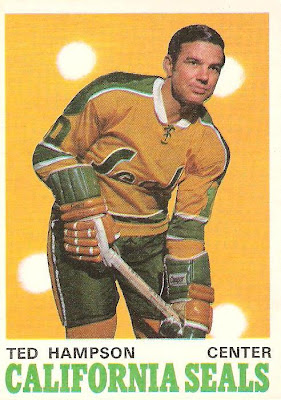 1970-71 O-Pee-Chee #190 - Ted Hampson - Ted is the first of a trio of 70-71 OPC Seals I won cheap on eBay a while back. He was quite the gentleman apparently, as he won both the Masterson trophy in the NHL and the Paul Deneau Trophy (most gentlemanly player) in the WHA. If you can believe Wikipedia he is currently employed by the Colorado Avalanche as their chief scout... 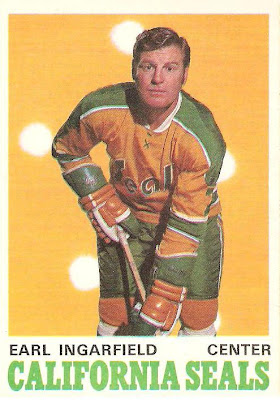 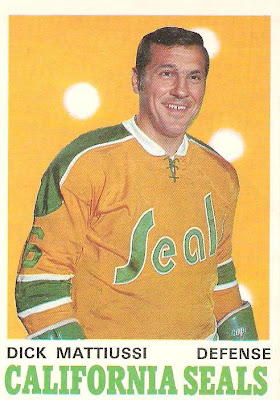 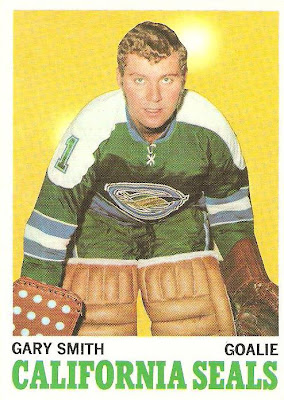 1970-71 Topps #69 - Gary Smith - As part of the same auction, I got a single 70-71 Topps card. I'm pretty much a sucker for any goalie card that features the old-style brown pads. Smith went on to have greater success after leaving the Golden Seals. In 1971-72 with the Blackhawks he split duties with Tony Esposito and the two were co-awarded the Vezina Trophy that season. Random trivia fact, Smith gave up the final WHA goal ever scored. 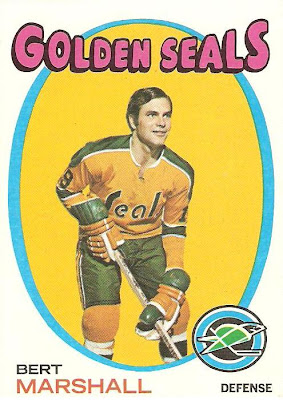 1971-72 Topps #73 - Bert Marshall - I only have a handful of cards from the 71-72 set, and that's a shame. It has to be one of the best hockey sets released in the 1970's in my opinion. Bert joins Doug Roberts as my second Golden Seal from the set. On a side note, I really like the Seals logo on this card. 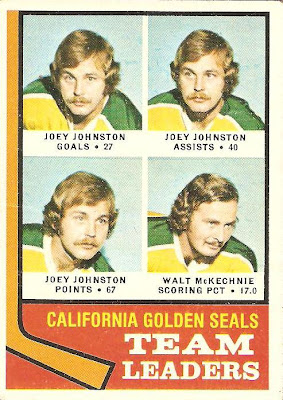 1974-75 Topps #56 - Team Leaders - As you can see, Joey Johnston was the man for the Seals in the 73-74 season. How weird is it that scoring percentage was a stat that made it onto this card? Someday I'll get off my butt and complete this set... 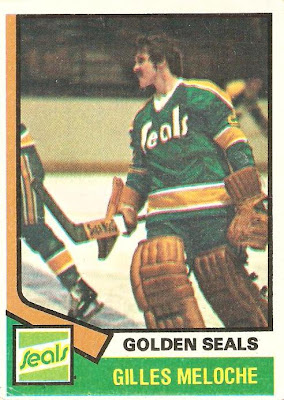 1974-75 Topps #205 - Gilles Meloche - Finally we have one last card from the 74-75 Topps set. Here we have the atrocious green road jerseys and once again some great brown pads.

Well there you have it, a random bunch of California Golden Seals from the collection!

Posted by shoeboxlegends at 12:40 PM

#1 Team card... love it! Do you know who that is in the bottom left corner?

#2 Gary "Suitcase" Smith!!! He is going to be in my next batch of TTM attempts I send out

I'm not sure who that is in the lower left hand corner, I'm at work and can't check either (if it even says on the back). Do you know or were you legitimately asking?

Looking forward to the Suitcase Smith autos if he ever returns them!

I loved the Seals and recently interviewed Brad Kurtzberg, who wrote Shorthanded, about the Seals. Great book for hockey fans and Seals lovers!

The posed photos are a classic feature I really miss.

Even by today's standards, only the rookie cards have some posed photos - albiet forced. It seems that today's players cannot be bothered to pose for a trading card.

The action shots are somewhat crude adding to their nostalgic flavor.

thanks for posting these.

The 71-72 cards are pretty nice, but I have at least one of the OPC cards from that season where they re-used a picture of a body and slapped someone else's head on it. Creepy.

I have a Phil Esposito card from 1970 where his dress pants are visible below the jersey. No pads under the jersey either.

Yes, I know the card you are referring to Michel!