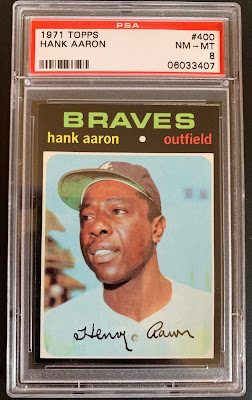 Of the many cards I've sold off on eBay in recent months, there was one that stood above all others.  The 1971 Topps Hank Aaron pictured above, in a PSA 8 slab, is a card I'd acquired back in June of 2007.  This was a time before I owned a home, and as a result had a lot more disposable income to spend on cardboard.  I'd just gotten back into the hobby after more than a decade away, and had an unofficial goal of acquiring all of Hammerin' Hank's Topps flagship cards in graded format.

Fast forward a dozen years and while I'd still like to acquire all of those Aaron cards eventually, I don't feel the need to spend the money to get them in the sort of condition my '71 Aaron was in.  So, this card was an obvious candidate to list when I decided to start letting some cards go on eBay earlier this year.

To my surprise, I netted a cool $265 for this card, almost exactly twice what I paid for it back in 2007.  Since I've done a good job of saving most of my proceeds from my card sales over the past few months, I decided to treat myself to a little spending spree with the proceeds from this Aaron.  In the end I walked away with five graded cards in exchange for this one. 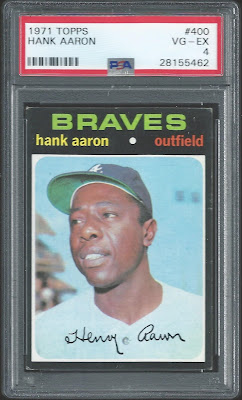 First card up, the exact same card?!?!  You got it!  The thing is, it's not that I don't love this card, it's just that I don't feel the need to own a near mint/mint copy like I had previously.  At $35.50 I was able to score this beauty, which is above and beyond what I expect out of my '71s condition-wise.  Besides, it will go so nicely with the Nolan Ryan and Frank Robinson cards I scored from this set earlier this year, both of which are also in PSA 4 slabs.

This was an obvious choice, as I now truly don't feel like I "lost anything" with respect to my collection in this exchange.  Got the same card I started with essentially, only with a pile of cash to use to pick up some other great cards.  Speaking of which... 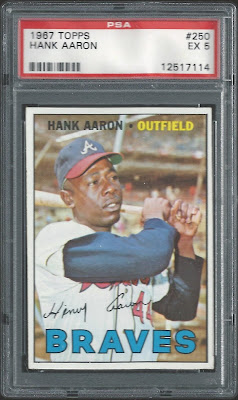 What can I say, I couldn't resist the opportunity to land another of Hank's iconic Topps cards.  A classic pose on this 1967 release.  '67 was a typical dominant year for Aaron as well, as he led the National League in runs scored, home runs, slugging percentage and total bases.

I've been focusing on 1950s baseball for the most part over this past year, but it feels good to flesh out my '60s collection of one of my boyhood idols.  A really nice looking card too, good eye appeal and I felt I got a steal using $59 of my proceeds to secure this one. 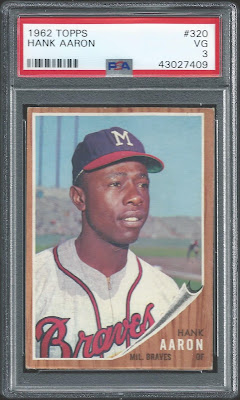 Next up, another Hank Aaron!  I promise this is the last one in today's post.  The 1962 Topps set has really grown on me over the years.  Like all sets from the '60s, there are some duds on the checklist, and more cap-less ballplayers than I'd care to see in any set.  When paired with the right photograph though, the design results in some truly beautiful cards.

I was drawn to this one because it looks absolutely stunning for a card graded a mere "VG 3" by PSA.  When I first got into graded cards in the late 2000s, I made the mistake of being obsessed with the grade.  I wanted all of my cards from the 1960s to be in a PSA 7 grade, no exceptions.  At some point though, I realized my OCD was hurting me, and preventing me from owning some of the very cards I desired most.  Nowadays, I just pay attention to the way the card looks, and couldn't care less about the grade.  In fact, if I can find a card that appears "under-graded" like this one I'm even more pleased, as it just saves me coin in the end.

Nonetheless, a 3 seems pretty harsh for this one, doesn't it?

Let's look now at the final two cards from this flip, neither of which feature Henry Aaron... 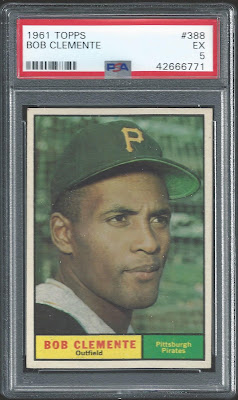 Another player I've really been drawn to in recent months is the great Roberto Clemente.  He's not nearly as represented in my vintage baseball collection as he should be, and I set out to rectify that with some of the proceeds from this sale.

Honestly, I'd love to one day acquire all of Clemente's vintage flagship Topps run, so in this instance I wasn't even looking for any one particular card.  I just knew I wanted a vintage Clemente, and was prepared to pull the trigger on whatever the best deal was that I could find.

This card felt like the best value, in amazing shape with just about perfect centering for $52.  I could not be more pleased with this pick-up, in fact I'd say it may be my favorite card of today's grouping, though that's certainly a tough call to make.

With four vintage baseball cards procured, I wanted to do something a little more off-the-beaten-path as far as my collection goes with the balance of the proceeds.  I've been trying to think of some iconic, yet affordable, cards from the other major sports for my "Cardboard Keepers" project, and ended up going that route with the rest of the funds. 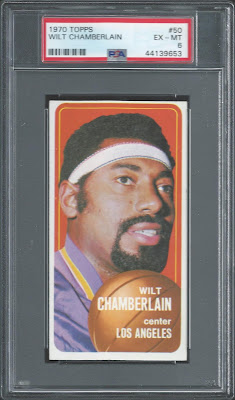 Pretty sweet, huh?  Though I don't collect basketball cards strictly speaking, I like the idea as I mentioned above of at least landing a handful of cards of the best in the history of the game.  High atop that list would have to be the great Wilt Chamberlain.  Dude averaged more points in a season some years than most players ever achieve as a single-game career high, and is still the only player in NBA history to score 100 points in a single game.  Chamberlain is a household name, even in a household that lacks basketball fans.

When it came to selecting the first card to represent the man in my collection, the choice was easy.  I'm admittedly a total sucker for the "tall-boy" cards that Topps issued in the '60s and early '70s.  I already had hockey and football examples in my collection, so picking up a basketball counterpart was a no-brainer.  Besides, there's something about a tall basketball card in particular that just feels fitting, right?  I'm sure I'll be inducting this card into my Cardboard Keepers album in the future.  In fact, that's probably the case for all five cards in today's post.

So, that's the story of probably my single greatest card flip of 2019, and one of my better flips of all time.  How do you think I did?  If you had a couple hundred bucks in Paypal credit from a sale to spend on cards, would you pick up a few heavy hitters like this?  Maybe a bunch of small cards instead?  Use it all on a single white whale?  I'd love to hear your thoughts in the comments.

Thanks as always for stopping by!
Posted by shoeboxlegends at 10:55 AM

Love the '67 Aaron and what a great way of getting more cards by flipping the one. Smart. Wilt is a great card as well. Dude was so good. Fun post.

You really have an eye for maximizing returns with vintage/slabbed singles. Very nicely done! I'm trying to do this with my higher-end prospect cards but eBay selling never works well for me. The '62 Aaron is one of my faves (I miss it already) and any card of Clemente or Wilt is a winner!

I'm there with Owl. Can't stand slabbed cards. But for s### & giggles say one magically appeared on my door step, yep I'd flip it for several heavy hitters of the non-graded variety.

That downgrade looks like an upgrade to me! Drooling over that '61 Clemente.

Wow, you did a great job there! Sometimes quantity over quality is a better way to go. (And it's not like there's a huge difference in quality, anyhow.)

Wow. Great job on the flip. Aaron, Clemente, and Chamberlain? Can't go wrong with that.