Most of my "hobby money" is spent on cards. While I do enjoy reading about other odds and ends on collecting blogs, it's very infrequently that I purchase anything out of the ordinary myself. Every so often though I look through the ToppsVault eBay store. If you've never checked it out, it's definitely worth a look. I've seen everything from 1/1 cards, to color negatives, to signed Topps contracts up for auction. Many of the nicer items are far outside my price range, and I've never bid on anything until recently. A couple of weeks ago I made a low-ball bid on an item I thought was interesting though, and luckily I was the sole bidder so I won it at the starting price. A few days later a package arrived containing these: 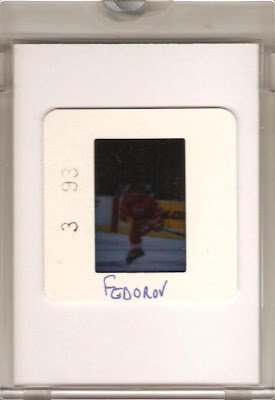 Topps slide negatives of one of my favorite childhood hockey players, Sergei Fedorov! The auction was for 2 "circa-1992" negatives of the Russian star. It seems as though this first one was taken in March of 1993 though based on the markings on the left-hand side. Not surprisingly, the negatives themselves are a bit dark and don't scan too well inside their plastic encasement, but here is a picture from the eBay auction that was created using this first negative: 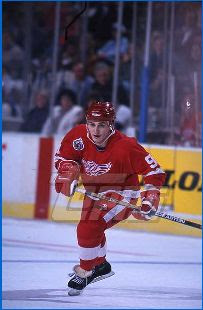 Pretty cool, huh? Here's the other negative from the auction: 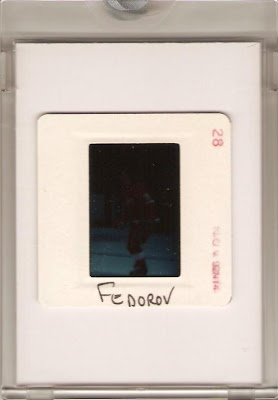 It may be hard to see in the scan, but the red stamping on the right border of the negative indicates that this shot was snapped on November 28, 1992. This would also be supported by the fact that Sergei's wearing the Red Wings red road uniform in the photo, and the Wings were away for a tilt against the Blues in St. Louis that day. I know the game ended in a 2-2 tie (yes, there were ties back then!), but I can't find any detailed info on the game. Anyone know where I could perhaps locate this?

I believe both negatives were shot by the same photographer. Although I'm no handwriting expert, both scribblings of the word Fedorov beneath the negative look extremely similar. The little curl at the top of the capital F is odd and a dead giveaway. Then again, I guess it's not necessarily the photographer that would've written this. Anyway, here's what the second slide looks like blown up: 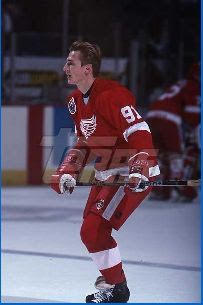 The negatives themselves are about the size you'd expect, and are affixed to a cardboard backing that's about the standard size of a card. Here's a scan of one side by side with a Fedorov card so you can get an idea of the scale: 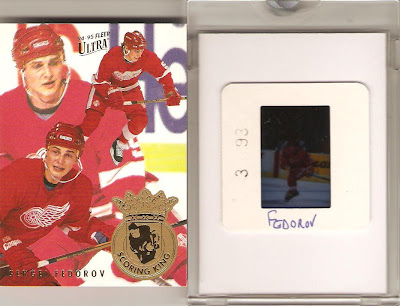 On the back of each cardboard backing there is a small hologram with the words Topps Vault and the item number on it. The hologram drowned out the writing when it was scanned but you get the idea: 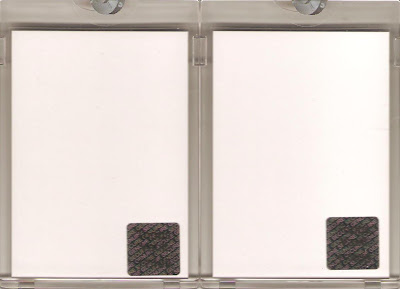 These were packaged up pretty nicely with the negative on cardboard backing encased in card holder that's about the size of your standard smaller screw-down or magnetic holder. The top where you would open the holder is sealed with a ToppsVault sticker:

Finally, accompanying each card was an envelope containing the Certificate of Authenticity: 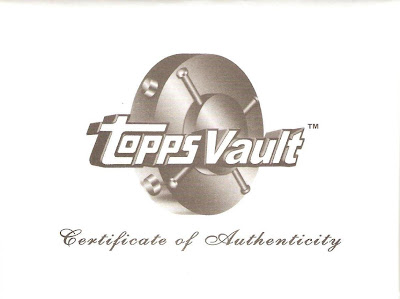 Here's a look at the certificate itself: 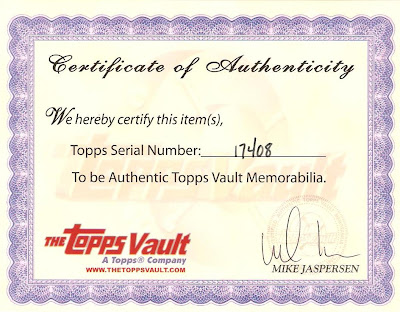 Nothing too exciting here, but I guess it's nice to have in the unlikely event that someone accuses me of making my own bootleg 1992-93 Sergei Fedorov Topps negatives!

Well, there you have it, something a little different for a change. I thought these were a cool addition to my growing Fedorov collection. For $11.50 I was pretty pleased with the product, the packaging and the overall experience. If the price was right I'd definitely purchase from the ToppsVault again.

Have you ever purchased anything from the ToppsVault? If you're a player collector, what's your favorite non-card item?
Posted by shoeboxlegends at 2:30 PM

Very nice "odd-ball" item to add to a collection. I have never seen things like that before.

Nope, but I'm gonna start buying from them. Got a few bids on a few hockey things. Hope I win.