A few weeks ago Panini released its answer to Upper Deck The Cup, a high-end set called Dominion. Initially, I was only mildly interested at best. After all, I knew for a fact that I wouldn't be buying a box at close to $400 retail. I figured if anything I'd grab a couple of cards on eBay like I did with The Cup. Then Captain Canuck tipped me off that there were some Hartford Whalers autographs to be had! Turns out that 2010-11 Dominion includes a 10-card Brass Bonanza autograph set featuring players from the Hartford Whalers in their green and blue! Great choice for a set name, the Whalers theme song is still popular with fans even after all these years.

I knew right away that I was going to chase these, even though it won't be the easiest task. First of all, the Dominion set has been extremely well received, and because of this the cards are selling for really good value on eBay and in the secondary market. The set currently has a ton of collector attention, so there aren't going to be any last minute eBay bid bargains to be had. Secondly, the autographs are serially numbered with pretty low print runs. 8 of the 10 cards are numbered to 50 copies, and the other 2 to just 24 copies. Regardless, I think this set would be a great cornerstone to my Hartford Whalers collection. In fact, it was kind of the motivation for the recent slew of Whalers posts, as well as a good organization of my Whalers cards after all these years.

Anyway, as I accumulate these Brass Bonanza autos and they start arriving in the mail, I'm going to post each one to track my progress. First up, we have card #8, Daryl Reaugh: 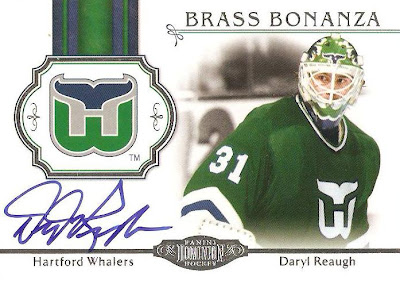 W-O-W. I'm obviously biased, but I think these cards look amazing. Very clean design...border-less white card with Dominion logo, team and player name in foil along the bottom. The photo is nice, prominently displaying the Whalers sweater and mask. Just above each photo is the Brass Bonanza branding. The nice big Whalers logo to the left almost looks like a medallion being suspended by a ribbon of blue and green. A perfect space is left for the signature, just above the team name and below the logo. The autos are on-card and done in blue Sharpie, which was one of two obvious choices (green being the other). Very well done Panini! Considering what kind of recycled garbage has made its way onto some Panini backs, I was almost afraid to turn the card over. When I did, I was pleasantly surprised: 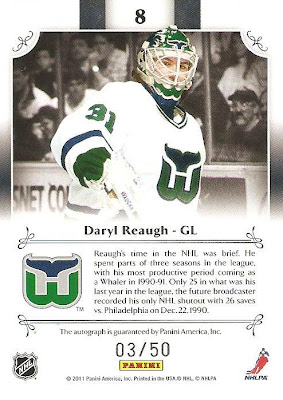 I think that is a pretty classy-looking card back. I really like the elegant border and the large photo (different from the one on the front, thank you!). Player name and position are listed, the Whalers logo makes another appearance, and there is a brief write-up about the player's time with Hartford. The card is serial-numbered along the bottom. Maybe not a perfect back (career Whaler stats would have been a nice touch), but pretty nice overall. Anytime you get a different photo that large on a card back you've done well in my opinion.

As far as thickness, this card definitely has more substance to it than a typical card, but it's not as thick as Upper Deck's The Cup cards are. I would say it's about 2/3 as thick as a card from The Cup. In my opinion the quality of the card itself just seems a bit better than The Cup.

Daryl is the only goalie in the 10-card set. Interesting choice as he played just 20 career games with Hartford, all in 1990-91. All in all, I say job very well done by Panini with these! What do you think of the design? Have you purchased anything from 2010-11 Dominion?
Posted by shoeboxlegends at 3:05 PM

I have to admit, that is a nice looking card.
At last Panini has got something right!

Nice card, but seriously Daryl Reaugh? Where are the Peter Sidorkiewicz autos?

I've disliked 90% of what Panini released this year, but they got Dominion right.

Great card, and I can't wait to follow the rest of these posts as you build this set.