Congratulations to David Krejci, who signed a 3-year contract extension with Boston yesterday. Krejci, who would have been an unrestricted free agent come season's end, is now locked up through the 2014-15 season. The contract was for a reported 15.75 million, or 5.25 million/year.

David's name was mentioned in trade rumors earlier this year as he struggled through some tough stretches, but he has always been somewhat of a streaky player throughout his career anyway. He's a good reliable two-way player who plays a great possession game and logs a lot of minutes night in and night out. When he's on his game, he's a highly skilled offensive player as well. I actually think this was a good signing for the B's. Why would you want to disturb the chemistry on a team of mostly young players who just went 12-0-1, capturing 25 of a possible 26 points in the month of November? This coming off-season's free agent class is pretty weak on centers too, so it's likely that he would have commanded more money in the open market, especially if he has a playoff run like he did last year. For this reason I think it was wise for the team to wrap up negotiations now.

I hope that this extension will keep David with the Bruins organization for years to come, but the reality is that the contract is setup in such a way that the team would have no trouble trading Krejci if it does come down to it. He does not have a no-trade clause currently, and will not have one for the first year of the deal next year either. In the second and third years, he does have a partial no-trade clause, but can only reject a deal to 6 teams. 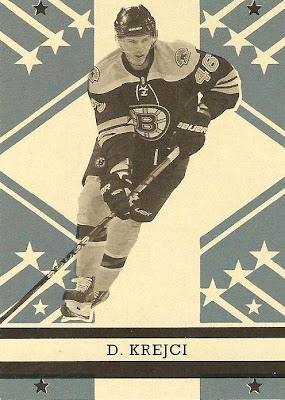 Congratulations David on your new contract. Thanks to Casey at Drop the Gloves for this O-Pee-Chee retro parallel, which is yet another card that came in the recent prize package.
Posted by shoeboxlegends at 10:11 AM