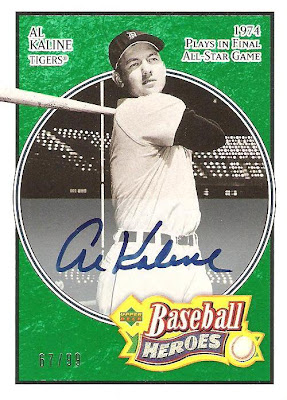 What's not to like about Al Kaline? He won a batting crown at age 20, was an 18-time All-Star and a 10-time Gold Glove winner. He won a World Series (.379, 2HR, 8RBI in 7 games!), amassed 3,000 career hits and came just a home run shy of 400. He was elected to the Hall of Fame in his first year of eligibility. Aside from all of that, you have to respect a guy who played his entire 22-year career for a single ballclub. When I think of the Detroit Tigers, Al's name is the first that comes to mind.

This card, which commemorates the last of Kaline's 18 All-Star game appearances, is from the 2005 Upper Deck Baseball Heroes set. The autographs from this set are something I only got into this past year, and they are definitely some of my favorite autographed baseball cards. I think these cards look great, and the checklist is extremely impressive. Not long after I picked up this Kaline I ended up with Harmon Killebrew and Ozzie Smith autos from this same set. All of the autos are hard signed and serial numbered based on the color, with this emerald version numbered to 99. 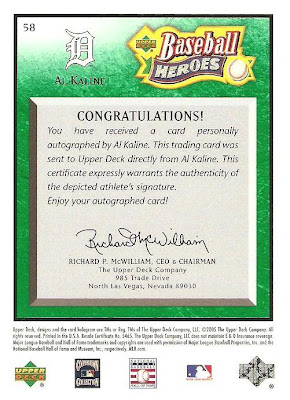 Two more posts and I can finally put this thing to bed. Coming up next is someone who's more famous for his personality than for anything he accomplished in professional sports...
Posted by shoeboxlegends at 9:20 PM

Beautiful card. Kaline is one of those players you can't dislike.

Oh wow, I'm super envious. That's a hell of a card there, sir.