Shaq and the Nostalgia Factor

Yes, I'm still around.  It's been a great summer here in New England, and I've been spending most of my free time enjoying it to the fullest.  I haven't been buying many cards, and I certainly haven't been very active with posting here.  Instead, I've been wasting my hours out on the ocean, watching fireworks shows, eating fresh lobster and drinking beers in the hot sun.  What can I say, some things in life can be more enjoyable than little squares of cardboard.

I haven't given up on collecting though.  This is just something that seems to happen to me every year around this time.  I've still been keeping up with reading the other blogs in my blogroll, and I've still picked up a few odd cards here and there.  Here are a few examples that have arrived recently... 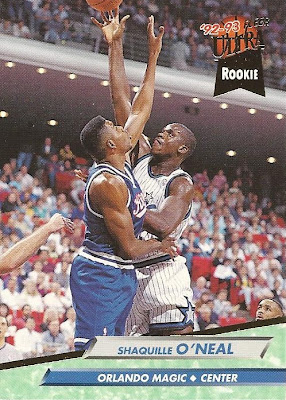 If you were a 10-year-old like I was in 1992, and you collected sports cards, there was no escaping the Shaq craze.  It didn't matter if you were a die-hard NBA fan, or had never watched a single game.  Whether you collected basketball cards or not, you wanted a Shaq rookie.  Among my group of card-collecting friends, these were just about the most valuable cards on earth, at least for a couple of years there.  I swear there was a time when you could have flipped this Fleer Ultra card for a vintage Hank Aaron no questions asked.  Fast forward 20 years...the market's bottomed out and I paid $6 shipped for this mint copy (and probably overpaid at that). 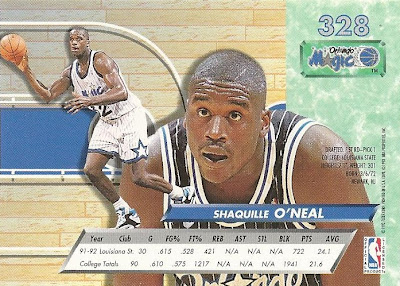 This card doesn't really fit with my collection at all, but it was cheap enough and I couldn't pass it up for the price just because of the memories it brings back.  Have you ever purchased any cards that fall well outside the scope of what you normally collect just for the nostalgia factor?

There are a couple of other Shaq rookies that I recall fondly as well, I'm probably going to track those down.  Since I picked this card up from one of my favorite eBay sellers, I decided to browse around to see what else he was offering.  I stumbled upon one of the best looking '80s baseball cards that I had never seen: 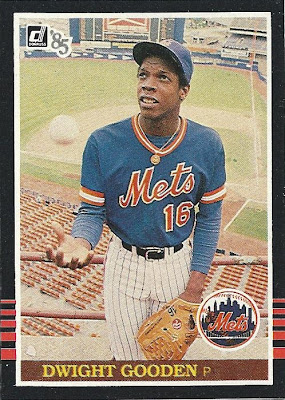 When I first saw this card I did a double take.  I couldn't recall exactly what Gooden's '85 Donruss card looks like, but I was sure I hadn't seen this photo before.  A quick eBay search confirmed that this was not his base card from the set.  This card is actually hand cut from an '85 Donruss wax box.  The photo selected for this one is far superior to the somewhat boring portrait shot that appears on Dwight's standard '85 Donruss card.  I don't stumble across too many '80s baseball cards that are "new" to me, so I was really happy to add this one to the collection. 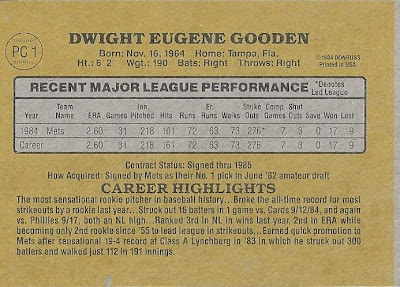 Here's the back.  From reading the career highlights section you can definitely tell that this was released right in the middle of the Gooden hysteria.  There are also Ryne Sandberg and Ron Kittle box panel cards numbered PC2 and PC3.  Neither of them look as nice as the Gooden in my opinion though.  I picked up one other card from this eBay seller to complete my order, another basketball card believe it or not: 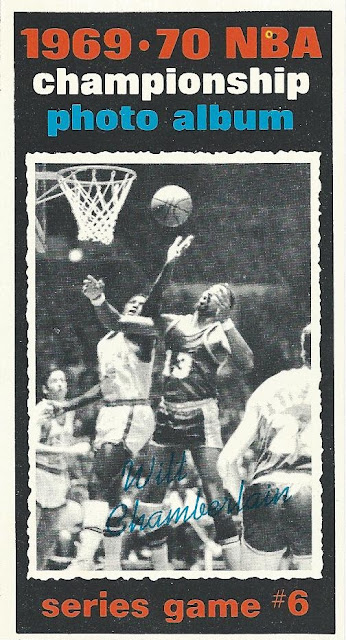 This one's from the 1970-71 Topps set.  Like a few Topps basketball sets from the era, this one uses the tallboy format, which I love.  At the very end of the base set is a small subset containing a card for each game of the NBA finals between Los Angeles and New York.  This particular card, for game 6, features a great shot (and facsimile autograph) of Wilt Chamberlain.  I know this isn't a true Wilt Chamberlain card per se, but it was a chance to get a vintage Chamberlain in my collection for a very reasonable price.  The card is in really great shape and set me back all of $8 shipped. 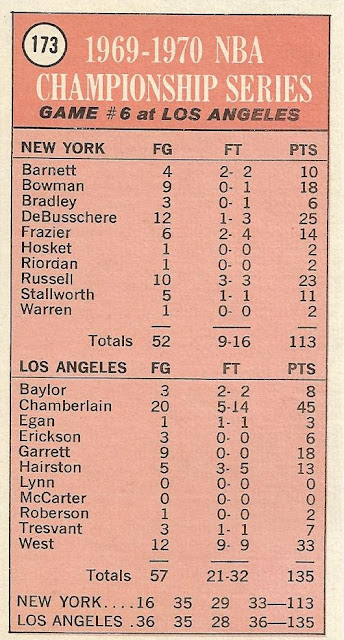 The back of each card from the subset gives you a breakdown of the game.  As you can see Wilt put forth a monster effort in game 6.  Had he shot a bit better from the free throw line, he would've topped 50 points. 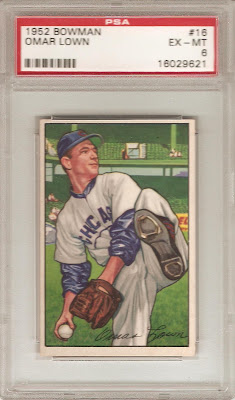 Here's my latest '52 Bowman, Omar "Turk" Lown of the Chicago Cubs.  I seem to pick up one of these cards every few months.  I don't know anything about Lown, this one was purchased solely based on aesthetics.  I really love the way this card looks, with the sparsely populated grandstands in the background and Turk's gigantic cleat in the foreground. 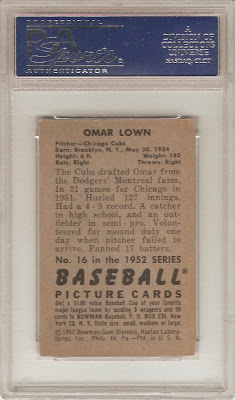 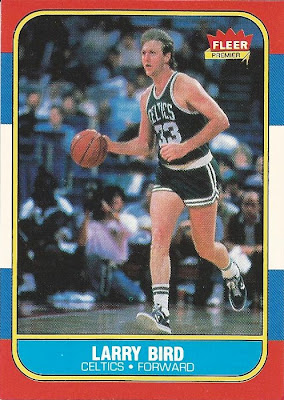 Finally, we have one more basketball card.  I picked up the Robert Parish card from the '86-87 Fleer set a while ago, and instantly realized why this set is so prized amongst basketball collectors.  I've wanted to pick up a Larry Bird ever since, and recently found one in a condition and at a price that I was happy with. 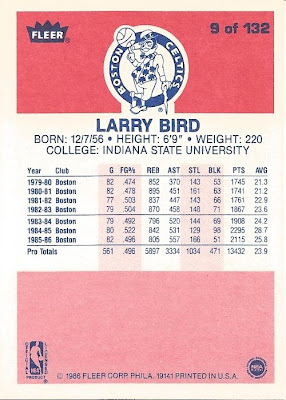 Well, that's all for now.  I do have some other great stuff to get posted, including an extremely generous surprise package from Casey at Drop the Gloves, I hope to find the time to get it all posted soon.  In the meantime, I hope you're all enjoying summer...
Posted by shoeboxlegends at 10:06 AM

That Bird card is one of my favorites of his ever. Nice pickup; now get the Walton!