After a lengthy delay, here's the final installment of the countdown of my favorite Red Sox cards from my collection... 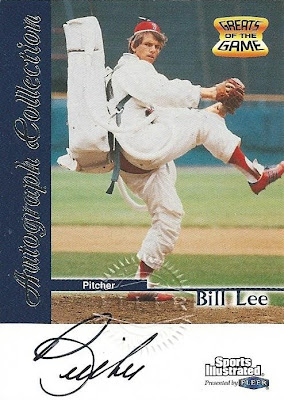 Just an awesome card of The Spaceman that I picked up in a hobby shop in Manhattan when I was there for work recently.  I've got one or two other Bill Lee autos, but nothing that compares with this one. 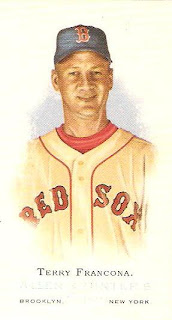 The greatest manager that I've had the pleasure to watch during my time as a fan, and the man at the helm for both of the World Series Championships that have occurred during my lifetime.  Also, I thoroughly enjoyed his book last summer. 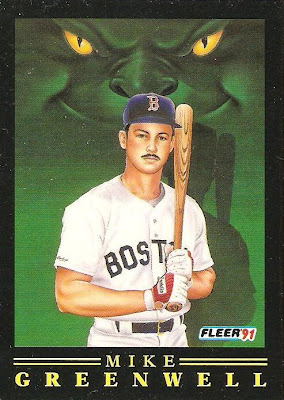 Cheesy?  Yes, but I don't care.  This one's on the list for nostalgic value.  I loved these inserts as a kid, and had the entire set.  In fact, the Greenwell that you see pictured here is my original childhood copy. 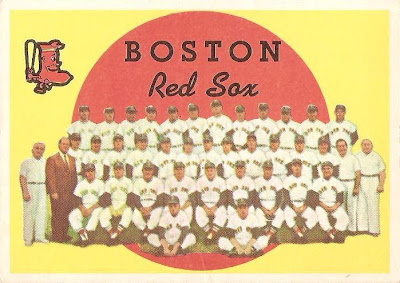 I don't think anyone can really argue against this one.  Someday I've got to track down any of the vintage Red Sox team cards I don't have yet, I know there are at least a few.  This one has always reminded me of the Japanese flag. 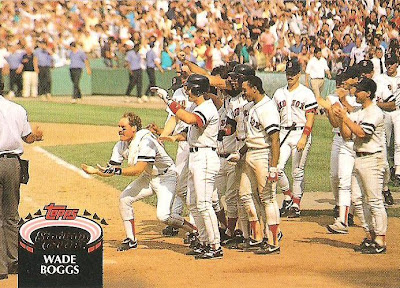 A '90s classic!  Stadium Club photography at its finest.  Like I said when I started off the countdown, there are few things I like more than a well-done good ol' fashioned base card. 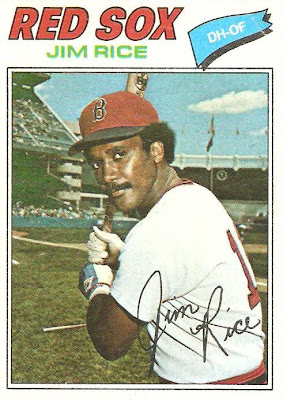 Jim Rice was pretty much before my time.  Although I believe I did see him play at least once or twice among my first few childhood trips to Fenway Park, I certainly never witnessed him in his prime.  Dude could flat out rake the ball though, and I was glad to see him just make the Hall of Fame a few years back.  It's possible that I own a better Jim Rice card than this one, but right now this is the best I've got cataloged.  Boy, a Yankee Stadium backdrop doesn't hold the same mystique on a late '70s card as it does on one from the '50s huh? 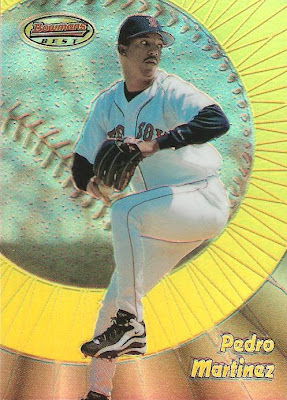 Pedro was the most dominating Red Sox pitcher I've ever seen.  1998 was the year he came to Boston, so this seemed like an appropriate selection.  Plus, who doesn't love a refractor? 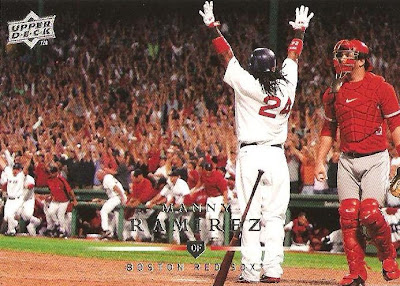 This might be my single favorite card of 2008, period.  That says a lot given how I feel about Manny Ramirez.  Like many collectors I love when a piece of cardboard captures a particular moment in time, and what a fine example this is.  The photo is taken just seconds after Ramirez crushed a 2-out, 3-run walk-off home run to give Boston a victory in game 2 of their 2007 ALDS series against the Angels.  The crowd erupting and his teammates spilling off the bench, Manny raises his arms in celebration and shows the Fenway faithful his best jazz hands.  Meanwhile the bat hasn't even fallen to the ground yet, and the Angels' backstop already looks depressed. 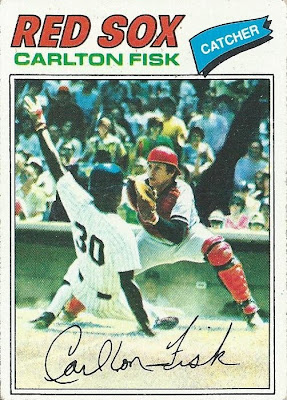 One of the all-time best play at the plate cards.  There's really nothing I would change about this card.  I ranked another Fisk higher than this one, but I'm kind of regretting that now.  You can judge for yourself in another minute here... 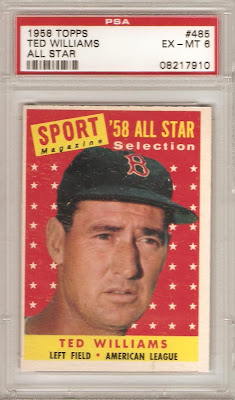 I've always loved the '58 Topps All-Star subset.  It was the first time Topps did one actually, and completing the entire set PSA graded is one of my best accomplishments since I got back into the hobby.  The primary reason this card fell all the way to #18 is the centering.  Someday I will sell this one and upgrade to a better looking example, but it's not high on my list. 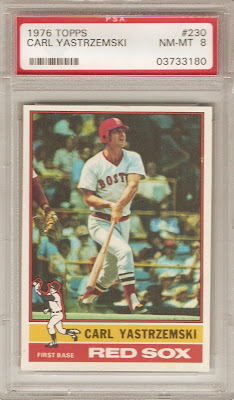 Ted Williams and Yaz back to back, you can tell we're getting to the meat and potatoes of the countdown here.  You've seen this one a million times before, most anyone with a decent '70s Topps collection has a copy.  Red Sox fan or not, I bet if you ranked your 50 favorite cards from the '70s this might be in your list. 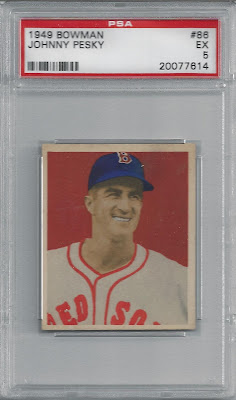 I am pretty much fascinated by any cardboard released pre-1950.  It's actually a shame how few very early vintage Red Sox cards are currently in my collection.  I'm working to change that though, in fact in my last post I showed off a couple of '49 Bowmans that recently joined Johnny here. 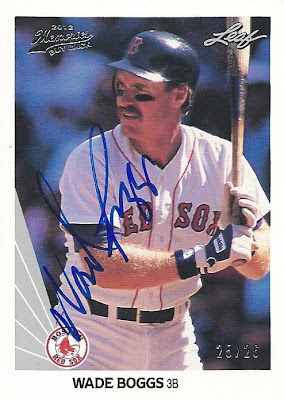 Perhaps I ranked this one a bit too high, but if you had told me as a 7-year-old that I'd have an autographed Wade Boggs card in my collection I likely would have passed out.  There's been quite a bit of Wade on this countdown, but there's one Boggs card still to come... 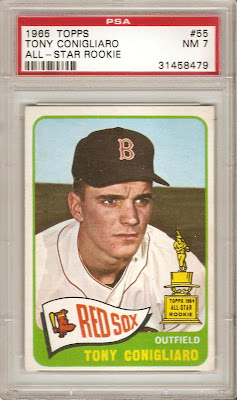 I've always liked this card because it shows a young, determined Conigliaro, full of promise and talent and just starting out on his MLB career.  This Tony Conigliaro had the world in front of him, unaware of the tragic, unrelated events that would derail his career and then end his life an at early age. 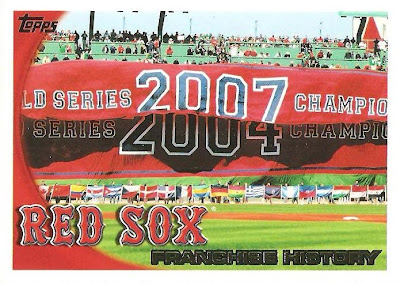 I bet you didn't think a card from the 2010 Topps flagship set would crack the top 15?  There is no piece of cardboard that better encapsulates both recent World Series Championships in one fell swoop than this one. 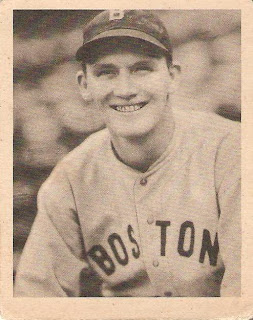 For years, and until very recently, this was my oldest Red Sox card.  Yes, it's black and white, and maybe not the most aesthetically pleasing square of cardboard, but it's just about 75 years old, which is enough to get it a slot in the top 10. 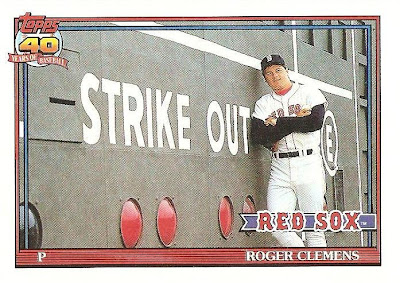 I'm not a big Clemens guy anymore (is anyone at this point after how things have gone the past few years?), but I can still appreciate this card.  Topps really knocked it out of the park with this one.  I'm partial to horizontal cards as it is, and positioning Clemens, one of the game's strikeout kings at the time, in front of the words 'strike' and 'out' on the green monster scoreboard was genius. 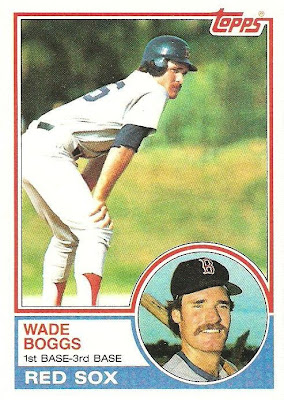 I consider this the quintessential '80s Red Sox rookie card (like I said, not a big Clemens guy).  It took me way too long to finally track down a copy, but I'm really glad I did.  Boggs joins Gwynn and Sandberg to form the trio of ultimate '83 Topps rookie cards. 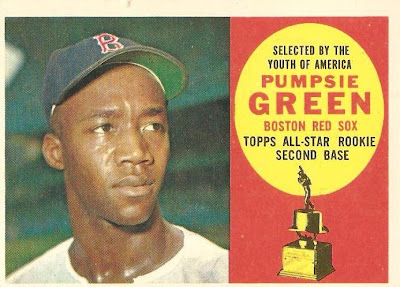 One of the things Red Sox fans shouldn't be so proud of is the fact that they were the very last team to integrate.  On July 21st, 1959, Pumpsie here finally put an end to all that.  I feel that alone is deserving of a prime spot in my countdown. 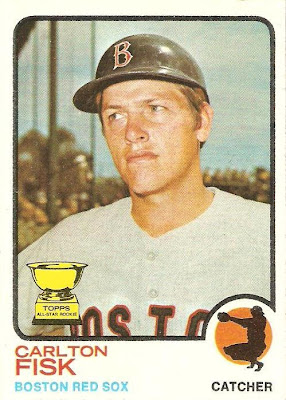 I don't own a '72 Topps Fisk rookie, so this is the earliest Pudge I've got at this point.  I'm starting to think the Topps rookie trophy and rookie cup logos factor pretty heavily into how much I value a card.  There's no doubt this is a great piece of cardboard, but should I really have ranked it above the '77 Fisk?  Now I'm not so sure. 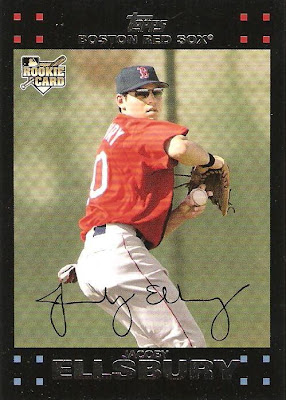 I know, I normally rail against gimmick cards and now I've listed one in my top 5 Red Sox cards.  Hear me out though.  It was 2007 and I had just gotten back into the hobby as an adult after a good 10+ year hiatus, and I was too new to the hobby to even know what was what.  At the point when I stopped collecting as a kid there weren't short prints, autographs, game-used cards or any of those other gimmicks.

That fall of 2007 I would buy packs of whatever I could get my hands on, and much of the time that was the 2007 Topps Updates & Highlights set.  I'd heard rumblings about the Jacoby Ellsbury super-short-printed rookie card and how rare it was.  I opened pack after pack as I hand collated my set, but whenever I pulled card #100 it was the same card #100 as everyone else was pulling, Abraham Nunez.  One day when leafing through a recently cracked pack I stumbled upon this one though, the elusive Ellsbury SSP.  I could hardly believe my eyes.  I felt like I was Charlie and had just pulled the Golden Ticket.  You have to understand the climate too, Ellsbury was lighting it up and the Sox were on the march towards their second World Series Championship in four years.

It's corny, but I got that same feeling of excitement that I used to get when I'd pull a Nolan Ryan or Wayne Gretzky card from a pack as a kid, especially since this just came from a random choice of two packs selected at the shop.  It's still a really rare card (just one example on eBay right now in a PSA 9 for $500), but I've never been able to sell it.  Maybe if he signs a huge contract with another team in the off-season I'll cash in and use the money on some vintage, but for now I count this among my most prized Sox cards. 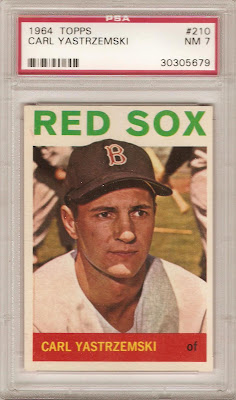 Of all the Yastrzemski cards I have, this one's my favorite.  Part of it is my love for the '64 Topps design, part of it is the photo of the very young Yaz staring off into the distance.  I don't have a whole lot to say about this one, but I don't think it needs much explanation either. 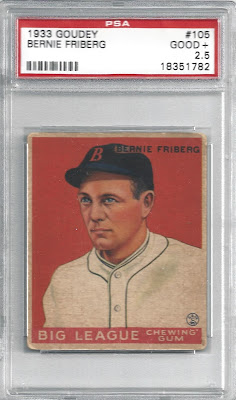 Here's a very recent pick-up, no more than a few weeks old now.  It's so new that I haven't had a chance to show it off yet, but it's now my oldest Red Sox card.  I know the corners are a bit rounded but there are no creases, holes or pen marks and the visual appeal is very good.  For a card that's 80 years old now I can't complain.  You know what the crazy part is?  This set me back less than a blaster, shipped.  By a few bucks too.  Gotta love eBay. 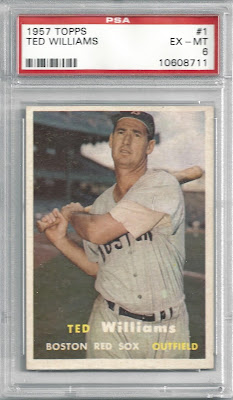 Since I was a kid I've wanted a vintage Ted Williams card from his playing days.  Last year I was finally able to make that happen, and I count this among my most prized cards from any sport.  It's extra high on the list because I really enjoy the '57 Topps set, and it's a 'bookend card'.  As vintage collectors know the first and last cards in the set generally demand a premium due to condition issues, so to get a card #1 on the checklist in this kind of shape from the '50s is pretty nice. 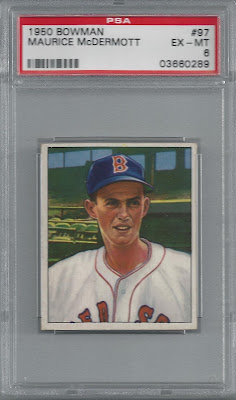 Unless you've been reading my blog for years and happen to have a really good memory, you probably wouldn't have predicted this one.  I can say with confidence that I'm probably the only Red Sox collector who values a Maurice McDermott card above all others.  Here's the thing though, this was my very first vintage card, purchased for me by my father at an antique store when I was around 7 or 8 years old.  It's what first developed my love of cardboard all those years ago, and it's the reason my collection and this blog exist.  I haven't been able to locate my original so far in the mess that is my parents' basement, but I picked up this placeholder a few years back which will fit the bill until Maurice finds his way home.

So there you have it, I hope you enjoyed this look at 100 of my favorite Red Sox cards.  I'm sure in a year or two I'll have enough new ammo that it will be worth revisiting this, but until then I stand by my selections!
Posted by shoeboxlegends at 10:55 AM

Very nice. Putting a personal spin on the No. 1 card is cool.

But I am reeling over the fact that the '76 Fred Lynn card is not anywhere on the list. Wow! (Oops, I just had another blog idea writing this).

Thanks Night Owl! The '76 Lynn is not yet in my cataloged and scanned collection so it wasn't one of the 2,000 cards I considered while making this list. I like to compartmentalize I guess, what can I say. I've got a copy of it around here somewhere so I wouldn't be surprised if it makes an appearance when I revisit this somewhere down the line.