Earlier this year I took advantage of an eBay seller who had a large number of cards listed, most of them at a buck each, and offered free shipping if you purchased 20 cards or more.  Well, I did exactly that, and today I grabbed and scanned a "blaster's worth" to show off here on the blog.  Let's see how I chose to spend $20 with this seller... 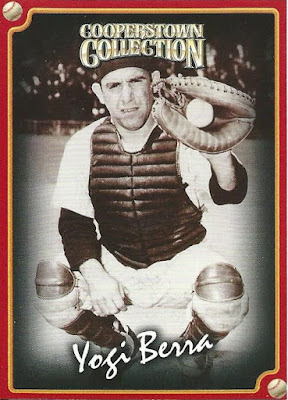 It's hard to go wrong with a new Yogi Berra card of any type, but a Starting Lineup card in sepia tone where he's donning the tools of ignorance is especially great.  Not a chance I was leaving this one behind for someone else to scoop up. 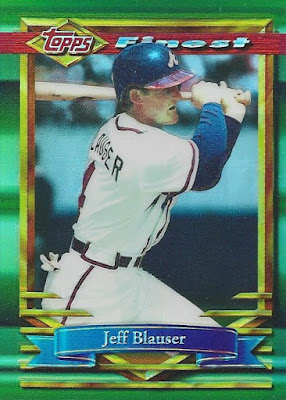 I've written multiple times of my love for the Finest Refractors of the early to mid '90s.  This seller had quite a few available from the 1994 baseball release, and I decided to grab both Jeff Blauser... 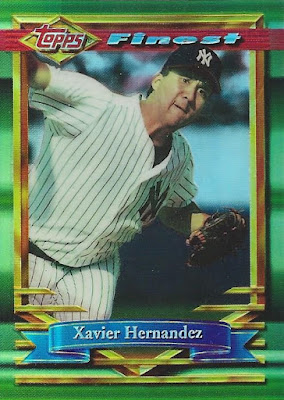 ...and Xavier Hernandez.  I know, not the most exciting names in the annals of baseball history, but I rarely run across these refractors of any player, even a common, for this price so it was an easy decision to toss this pair into my cart.  I recently landed a refractor of a HOFer from this same set, but that's a story for another day. 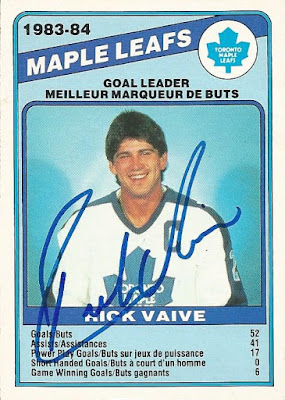 There were a few autographed cards to be had at the one dollar price point.  The majority of them were in-person or TTM autographs, but at a dollar I'm willing to take the gamble in some cases.  This '84-85 OPC Maple Leafs goal leader card is kind of cool. 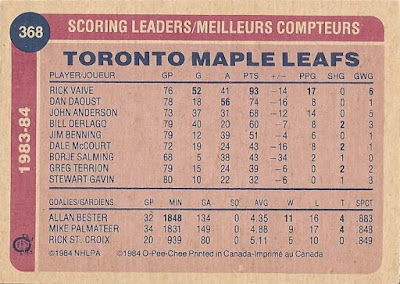 Too bad I didn't have this card in hand when I did my Stat Kings post on the '83-84 season a while back. 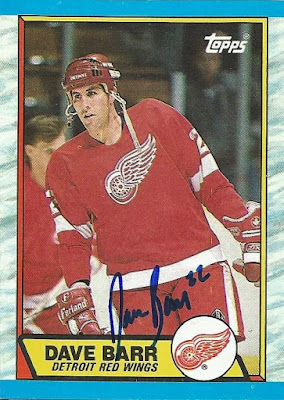 I also snagged this Dave Barr, for obvious reasons.  One more card down in my quest to accumulate as many '89-90 Topps/O-Pee-Chee autos as I can manage! 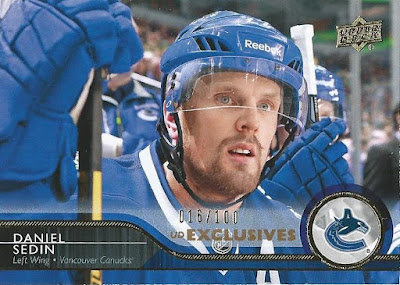 I debuted a PK Subban Exclusives parallel from this same seller on the blog last night, but Subban wasn't the only one I managed to pick up in this lot.  Also landed this gem of recently retired future HOFer Daniel Sedin.  A nice bench shot from Upper Deck here. 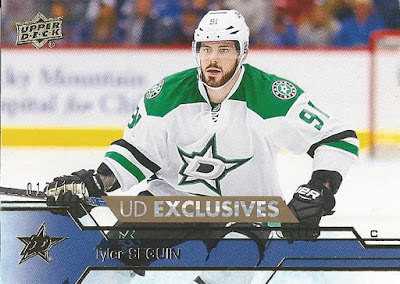 I couldn't leave this Tyler Seguin parallel behind either at the 99 cents price point.  The Stars are far from my favorite team, but Seguin is a legit sniper and may have a shot at the HOF himself someday if he stays on his current goal scoring pace. 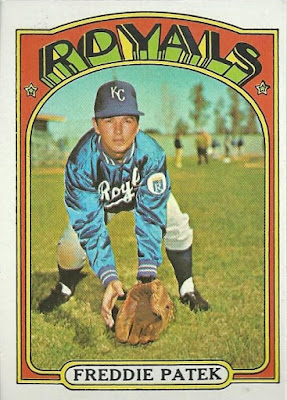 I picked up a few '72 Topps baseball cards in the order as well.  They're not players or teams that I collect... 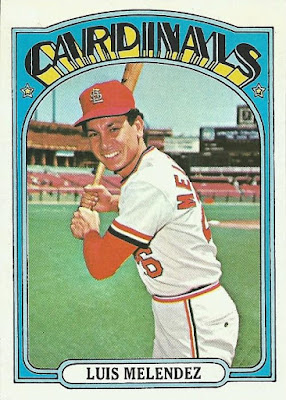 ...and I don't really have any immediate plans to work on this set, as much as I'd absolutely love to complete it someday. 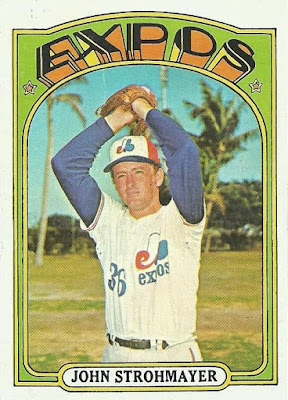 The real reason I grabbed these?  Well, they're all relatively high numbers, and I know from reading blogs and talking to other collectors that high-numbered '72s can be tough. 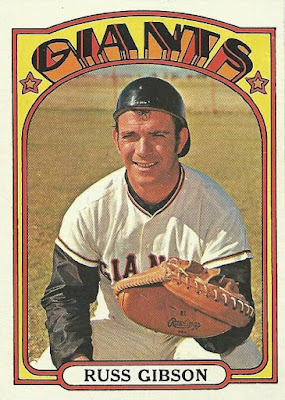 Seemed worth it to grab these four, all in pretty immaculate shape, for a buck per.  Someday in the future if I decide to bite this set off, I'll thank myself for the foresight that I had here! 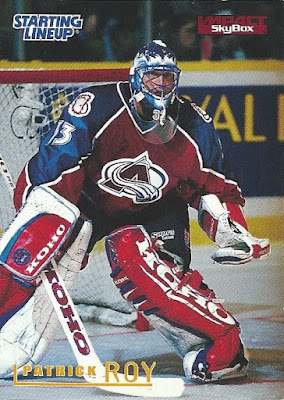 No, the Berra card that led off the post is not the only Starting Lineup issue that I have for you today.  I also grabbed a pair of goaltending superstars from the 1996 hockey release in Patrick Roy... 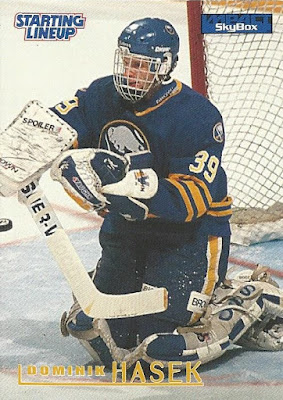 ...and the great Dominik Hasek!  While I don't actively collect him per se, Hasek was one of the most dominant goalies in the game during the time that I was really becoming a fan as a kid, so I always enjoy picking up some of his cardboard when I can.  I have a feeling this set is somewhat rare too, less than a third of the set is even available at all on COMC, and neither of these two are. 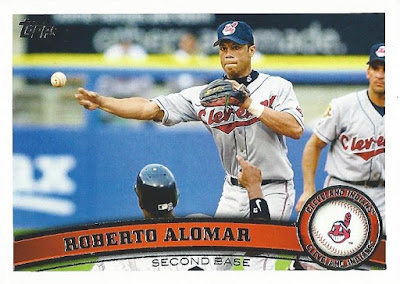 Another thing I'm a total sucker for are the Legends variations that Topps included in their flagship set for a few years there.  As a general rule I'm grabbing any and all of these that I don't yet have if they're available for under a dollar as Robbie Alomar here was.  One of my favorite cards in today's post for sure. 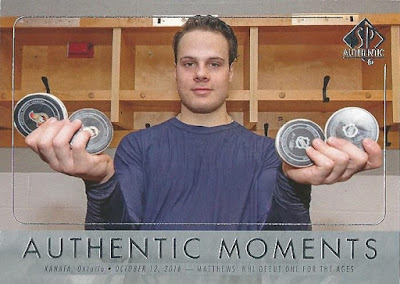 I've been a fan of the Authentic Moments subset from the Upper Deck SP Authentic release for years now.  I wish Upper Deck would make an entire base set of cards like this, where the photographs are dated and associated with specific games/moments in time.  This one pays tribute to Austin Mathews' very first NHL game, where he scored an amazing four times.  I'll probably never land his Young Guns rookie card (super expensive and not very high on my list either), so this is a nice alternative. 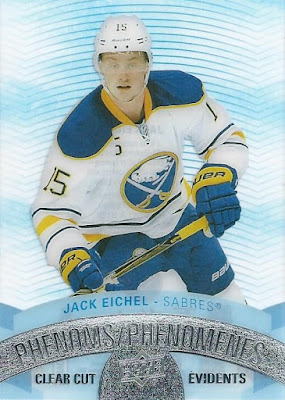 In case you can't tell by this point, I was kind of just aimlessly browsing around the seller's inventory looking for anything that caught my eye or seemed like a decent deal.  I've said it before, but we're living through some great times as collectors when you can sit on your couch at home with an iPad and "dig through dollar boxes".  What attracted me to this one, besides the fact that Eichel is one of the league's many bright young stars, is that the background in the upper portion of this card is clear acetate. 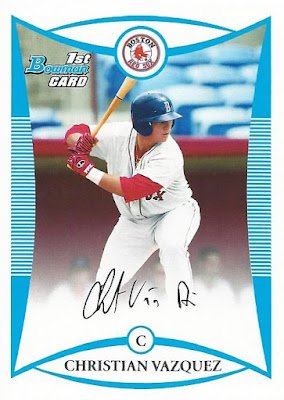 There weren't a ton of Red Sox cards to be had, but I did grab this 2008 Bowman Draft Picks & Prospects card of Boston backstop Christian Vazquez.  He's been the everyday catcher for the club so far in 2018.  I wish he could manage to hit above the Mendoza Line, but the reality is the lineup is stacked and he provides a ton of value on the defensive side of the ball. 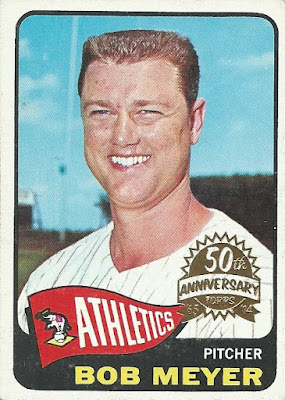 Closing things out for today, of course I checked to see if the seller had any buybacks available!  While it takes a relatively special flagship buyback to get me to shell out a dollar or more, I'll pick up just about any Heritage box-topper buyback that I don't already have for a dollar.  That's basically the only explanation for why I picked up a buyback of career 2-12 pitcher Bob Meyer. 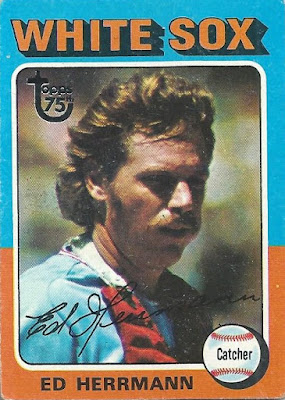 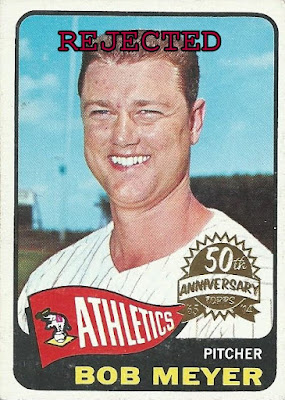 Meyer and his flat-top are off to the rejected box for now.  Still happy to have this one though. 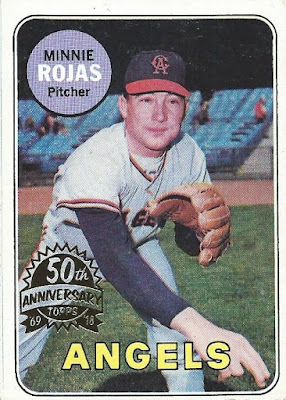 Next up, a Heritage buyback from this year's release.  I've actually picked up quite a few of these in lots, as well as some decent star singles, but haven't had time to digest many yet for the franken-set project.  Not much star power here, as Rojas was a reliever who lasted less than three seasons in Major League Baseball.  Does he make the binder in slot 502? 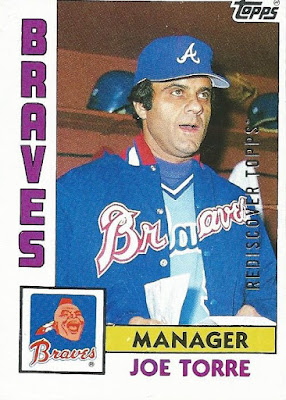 Off-center Joe Torre has a thing or two to say about that! 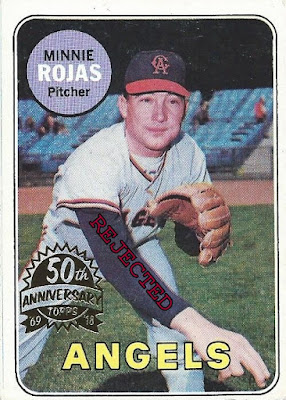 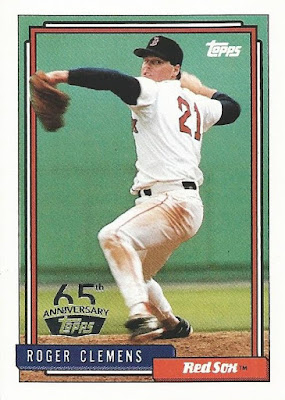 Finally, here's one I had no qualms about throwing into my virtual pile.  Clemens' iconic 1991 card is pretty much a dream buyback for me, but in the meantime this 1992 buyback isn't too shabby either.  Roger was coming off a Cy Young season here, and I like the photograph and cropping job on this one as well.  While The Rocket isn't exactly one of my all-time favorite Sox, this is still a strong contender for the binder. 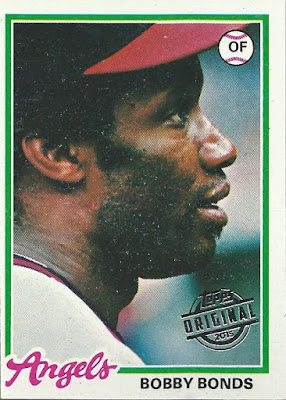 Being a #150 buyback, it's not surprising that Roger's competition is another former star of the game in Bobby Bonds. 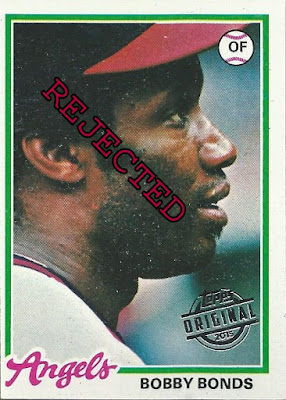 In this case I just plain like the Clemens cards better.  The Bonds card is certainly a decent buyback, but it's just been over-matched in this scenario.

That's an even 20 cards there, and at 99 cents per we've got a running total of $19.80, so I'll call it there.  As is the case just about every time I do one of these "virtual blaster" posts, I'm reminded of just how much more satisfying my hobby purchases tend to be when I'm hand-picking the cards I desire rather than leaving it up to the "Cardboard Gods".

Would you have grabbed any of these yourself for a buck?  Would love to hear your thoughts in the comments.  Either way, thanks for stopping by!

Lots of great variety here. I would definitely buy those for a dollar-especially the Eichel and Clemens (and the Subban from your previous post) Nice to see you add a couple buybacks as well. $19.80 well spent!

Nice pickups buddy! I’ll keep my eye out for signed 89-90 Topps for you!

Thanks a lot for the Rick Vaive flashback. Jerk.

I particularly liked the Austin Mathews card. I've become a bit of a sucker for anything colorful and shiny so I dig those Finest's. I usually agree with your Frankenset choices but I don't see anything special about Ed Herrmann so I would have gone with the '65.

Wow, quite the selection there. I don't think I've ever seen Starting Lineup hockey cards in the wild like that before, then again I haven't really looked for them.

I once met Xavier Hernandez before a Reds game once in. 1995. He was sitting on top on the dugout signing autographs and I handed him my glove, which was my dad's old softball mitt and about the size of my 9-year-old head, he looked at it, looked at me and said jokingly "that glove big enough for you?" He signed it and handed it back. I still have that glove to this day, even though the autograph is faded, it's the glove I still use when I'm playing catch (and it's still big 20 some odd years later).

Much better than a blaster. Love all of the SLU cards you picked up!

"Another thing I'm a total sucker for are the Legends variations that Topps included in their flagship set for a few years there."

You and me both! They always manage to wander into my COMC cart.