This Sunday we'll look at some autographs from three hockey franchises that have all moved on to new cities... 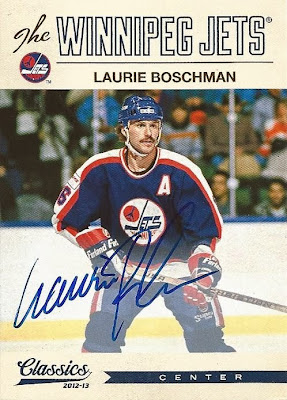 First up is Laurie Boschman of the Winnipeg Jets.  Boschman was a decent scorer (although again he played during a very offensive era), but was also not afraid to mix it up and rack up some PIM.  In fact, he's a member of the 500 point / 2,000 PIM club!  The Jets had a very balanced attack during those years in the '80s and no season illustrated that better than '84-85, when Laurie was one of six 30-goal scorers for the Jets!  Unfortunately the team never advanced far into the playoffs, and they were split apart after a few seasons.  As NHL fans know, the team ultimately relocated to Phoenix and became the Coyotes.  Thankfully for the city of Winnipeg, they got their beloved NHL franchise back a couple of years ago when the Atlanta Thrashers relocated and became the new Winnipeg Jets. 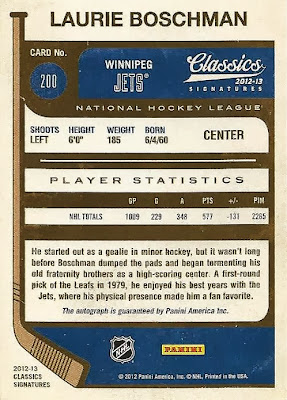 I did not know that Boschman began his hockey career as a goalie, props to Panini for that one.  Another random fact, Laurie was the first ever captain of the modern day Ottawa Senators franchise! 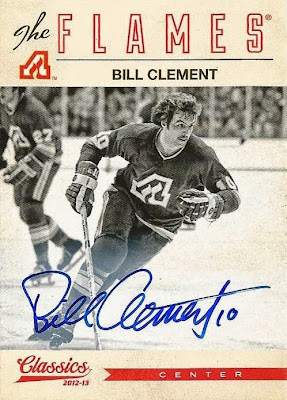 Joining Laurie Boschman in today's post is Bill Clement of the Atlanta Flames.  For those in my generation, Bill is much more recognizable as a broadcaster than a hockey player, but he did have a decent NHL career.  He was a member of the Flyers' Stanley Cup winning teams of the '70s as a fourth line center, before being traded briefly to the Washington Capitals, then finishing his career out with the Flames.  They were located in Atlanta when Bill first joined the franchise (and when this photo was taken), but would move to Calgary after the '79-80 NHL season.  You'd think the NHL would have learned from this and not bothered with the Altanta Thrashers a couple of decades later, but I guess not.

Anyway, I really love this photo, one of the few black and white shots in the set, and Bill has a really great signature as well.  I used to love the Bill Clement/Gary Thorne NHL coverage on ESPN back in the day, and as someone who played many of the NHL video games growing up I heard that same duo for hours on end many a day! 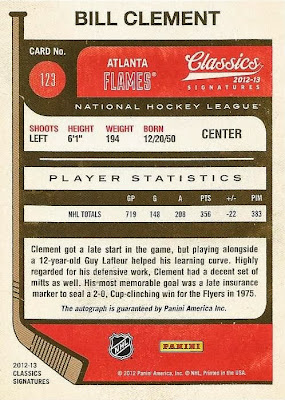 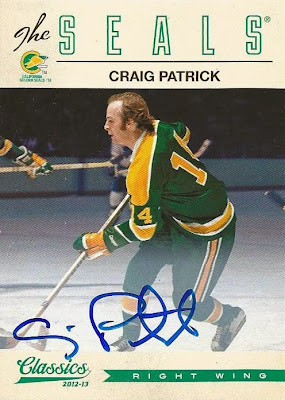 Finishing our trio of forgotten franchises is Craig Patrick of the California Golden Seals.  Like Clement, he's really made a name for himself by what he's done after hanging up his skates.  Patrick is one of those hockey guys who is just intertwined with the game in so many ways.  His grandfather was the infamous Lester Patrick.  He was an Assistant GM and Assistant Coach for the 1980 "Miracle on Ice" US hockey team.  On top of that, he was incredibly successful as GM of the Penguins for close to two decades. 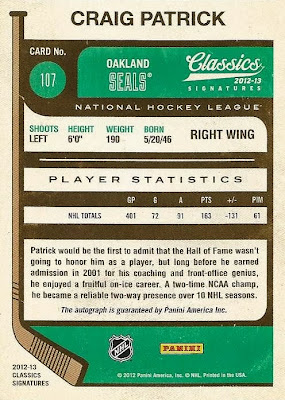 Unfortunately, the Golden Seals never really drew many fans and ultimately moved to Cleveland in 1976 to become the Barons.  Never heard of the Cleveland Barons?  After just two seasons they merged with the Minnesota North Stars, who have since moved to Dallas and shortened their name to simply the Dallas Stars.  Man, the NHL franchise shuffle can be confusing sometimes...

This trio of autographs brings me up to 33 and counting now from the 2012-13 Signature Classics set...
Posted by shoeboxlegends at 9:55 AM

That's a great looking set. If I ever start a new hockey PC... it'll probably be a California Golden Seals collection.

I love picking up cards from hockey teams which are no longer with us. I've always loved that Atlanta Flames logo, and as lame as the Calgary Flames logo is, I'm glad they continue using the Atlanta logo as the Assistant Captain's "A".

Thanks guys! Shlabotnik, I never actually put together that that was the old Atlanta Flames logo on the Alternate Captain's jersey. Thanks for the random knowledge!