This past week completely beat me down.  All I did is work, from early morning 'til late night, and sometimes until the wee hours of the next morning.  What little time I had to myself was needed for sleep, so other than reading a few posts on some other blogs I didn't even think about cards last week.  That included working right through Monday night's World Series Game 5.  I was at least able to free myself up on Wednesday evening though, and had the pleasure of watching my favorite team win it all from the comfort of my couch with a cold beer in hand.

The upcoming week should get a little easier, at least in theory, so I hope to squeeze a few posts in.  To kick things off, here's another trio of autographs from my 2012-13 Panini Classics Signatures collection.  All three players enjoyed some great success at the NHL level, and all three have last names that begin with the letter L... 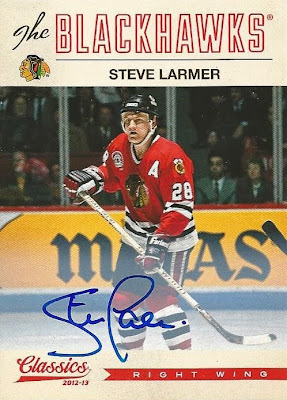 Steve Larmer might not be a Hall-of-Famer, but he had a solid career racking up some nice accolades as well as some impressive statistics.  Larmer kicked things off with a 90-point Rookie of the Year campaign in 1982-83, then finally captured a Stanley Cup near the very end with the Rangers in '93-94.  In between, he was a model of consistency playing in 884 consecutive games for the Blackhawks, an NHL record for consecutive games played with the same team.  In his final season with the New York Rangers he played in his 1,000th career game, and also registered his 1,000th career point. 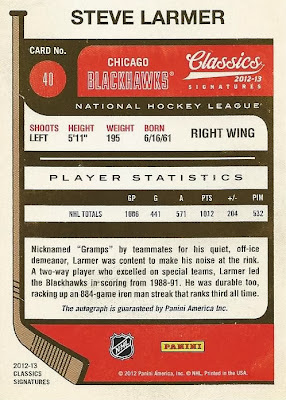 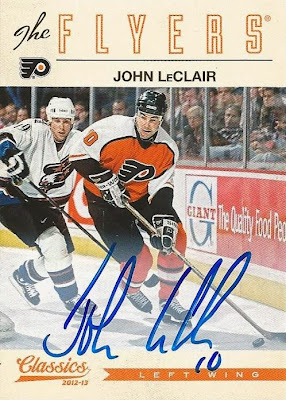 John LeClair was an autograph that I was really excited about when I saw the checklist for this set.  The Whalers were always my team growing up, but the thing about rooting for them was that they basically never made the playoffs.  When it came to post-season hockey I had to choose someone else to root for, and for me one of the most exciting teams was the Philadelphia Flyers.  What I liked most about the Flyers was the "Legion of Doom" line of Eric Lindros, John LeClair and Mikael Renberg.  I know LeClair had already won a Stanley Cup with the Canadiens before coming to the Flyers, but he really became a first-class player with Renberg and Lindros at his side. 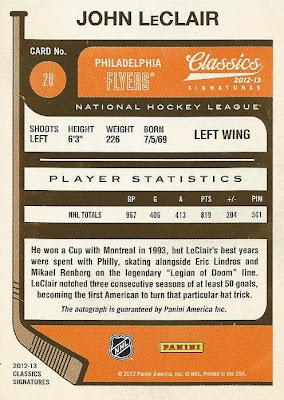 As the back indicates, he was the first American player to score 50 goals in three consecutive seasons. 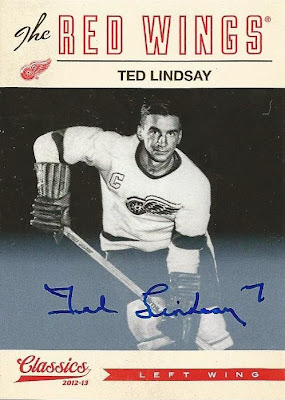 Last but not least, here's Ted Lindsay.  Ted's the only Hall-of-Famer from today's trio, elected all the way back in 1966!  There's no way I have the time to pay an appropriate tribute to Ted's long and successful career here, but I'll point out a few highlights.  Four-time Stanley Cup champion.  Art Ross Trophy winner.  Scored close to 400 goals and over 850 points in an era with historically lower offensive numbers.  He left his mark on the game in a number of ways; he was the first player to lift the Stanley Cup and skate around the rink with it, and was instrumental in the formation of the NHL Players Association, just to name a couple. 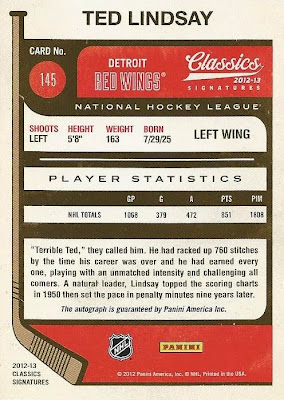 It seems almost criminal to get an on-card autograph of this Hall-of-Fame great who first took the ice for an NHL game in 1944 for just $6.82.  Unbelievable.

These three bring me to 43 autographs and counting from this set...
Posted by shoeboxlegends at 9:44 AM

A Blackhawk and Terrible Ted. Excellent!