Every so often I plan to post about a random Red Sox player's career with the team.  Rather than focusing on the Carl Yastrzemski's and Dustin Pedroia's of the world, I'd like to go a little more obscure, at least at first.  And of course, feature some cardboard.  A recent vintage pick-up seemed like the perfect place to start... 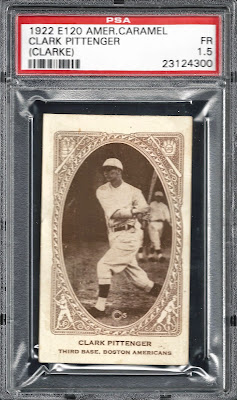 Man I love these 1922 American Caramel cards!  This is the second one I've been able to pick up for my Red Sox collection, and it features utility man Clark (actually Clarke) "Pinky" Pittenger.  As I mentioned nearly a year ago when I posted my first card from the set, I love that you get an actual photograph on these cards as opposed to an illustration or a painting.  Very cool to get a glimpse at what the game looked like nearly 100 years ago now.

The frame around the photograph is so ornate that it really feels like something that would have come out of the 1920s to me.  They really have a classy feel to them, I'm surprised nobody's made an attempt at using these for a retro set over the past decade.  Maybe someone has and I've just never seen them. 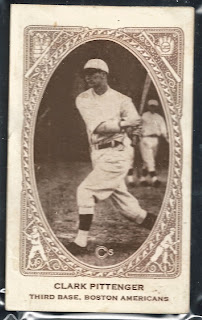 As for the player, Pittenger was born in Michigan all the way back in 1899!  He played his high school and college ball in Ohio before breaking into the Major Leagues with the Red Sox in 1921.  While the card lists him as a third baseman, utility player would be more appropriate.  He played every position except first base, catcher and pitcher in his rookie season alone.

After three seasons and 166 total games with Boston, he'd be sent to the Philadelphia Athletics, and then dealt to a team in the Pacific Coast League.  It's a little unclear to me what happened after that, but by 1925 he was playing with the Chicago Cubs.  One season was it in Chicago, as he would be selected to represent the "player to be named later" in a previous trade and shipped out of town.

After missing the 1926 season, Clarke would resurface for three more years (1927 - 1929) with the Reds, finishing out his career.  His final season was arguably his best offensively, as he racked up 11 doubles and 27 RBI to accompany a .295 batting average in 227 plate appearances. 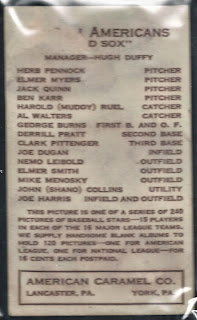 A little paper loss on the back, which explains the low grade.  These things are so hard to come by that I'm ecstatic when I can locate one in any grade at a price I can afford.

So there you have it, Pinky Pittenger, obscure name from the Red Sox past...
Posted by shoeboxlegends at 10:46 PM

awesome pickup! and shoot, all that matters is the front, really. that's a beautiful 1.5!

Amazing card! Best 1.5 I probably have ever seen!

Thanks guys! Dave, I agree, and I don't care in this case. Just wanted some piece of mind that it was authentic since I was buying it sight unseen off eBay. I can go years without seeing these sometimes, so when a saved search emailed me about this copy for less than $30 I couldn't click fast enough!

thanks for the info, that's my great-grandpa!

No way, that is awesome! Thanks for stopping by and for commenting!

yep! never met him but my dad looks a lot like him...probably bald under that cap!