Grabbing Gretzkys - A Look Back at Upper Deck's Legacy

In this installment of "Grabbing Gretzkys", we look at a grouping of ten new Wayne Gretzky cards that were included as inserts in last season's Upper Deck hockey release.  These were part of a "30 Years of Upper Deck" insert set, containing one re-imagined card from each of the brand's first 30 flagship hockey sets.

I like this idea for an insert set in theory.  Had I been in charge of assembling the checklist for this one, I'd have enjoyed doing some research to find one cool player who was significant in the year of each set's release, with a goal of diversity and getting some unique or lesser-known guys included.  In classic Upper Deck fashion though, they instead gave us ten Wayne Gretzky cards, ten Patrick Roys, and ten Connor McDavids (facepalm).  In all three cases, this approach (aside from being repetitive) results in at least one insert (many in the cases of Roy and McDavid) from a year in which the subject wasn't even active in the NHL.  Oh well.

For this reason, I wasn't too keen on collecting the entire 30-card insert set, but decided instead to just snag the ten Gretzky cards for my player collection.  Thanks to Upper Deck's e-Pack promotion, they were had for mere pocket change on COMC.  They're slightly more expensive these days, but you should still be able to find all ten for no more than 50 cents to a dollar each if you're interested. 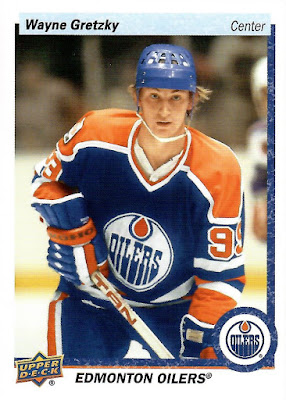 The cards proceed in chronological order, beginning with the company's inaugural hockey release in '90-91.  Wayne's 1990-91 Upper Deck card is somewhat iconic in the hockey card hobby, and it's interesting to me to see him with the Oilers on this design instead.  This is a somewhat faithful representation of the original, only the colors look darker/more saturated.  Also, the Upper Deck logo in the lower left is not accurate whatsoever.  Still, a recognizable tribute to the original. 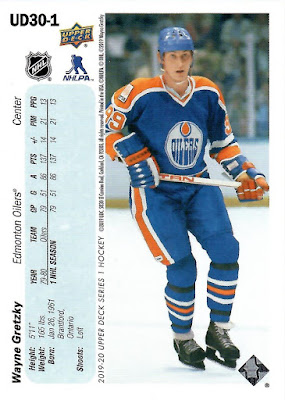 What I will give Upper Deck credit for is taking the time to replicate the card backs as well.  You know for a fact Panini would not have done this.  Not a chance.  Smart move by Upper Deck too, as especially in these first couple of releases, they were as infamous for their amazing card backs as for the fronts. 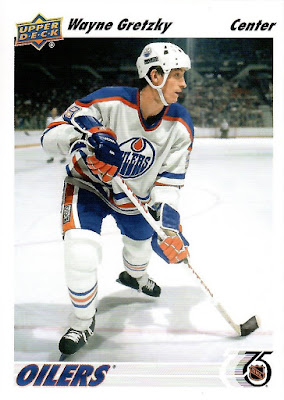 Next up, the '91-92 set, which I collected the holy hell out of along with my two brothers in the winter of 1991.  Easily recognizable thanks to the 75th Anniversary logo the NHL used that year (in the lower right).  I'm heavily biased here due to childhood nostalgia, but this is a fantastic "junk wax" era hockey set in my humble opinion. 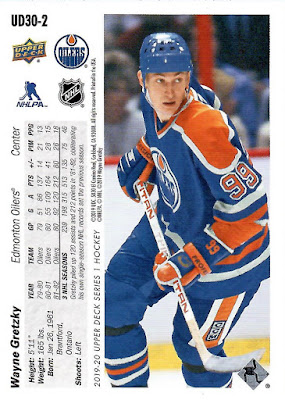 Again, it's interesting to see Gretzky with the Oilers on this design rather than the Kings.  That pattern will continue for the next few cards, so I won't bother to mention it again. 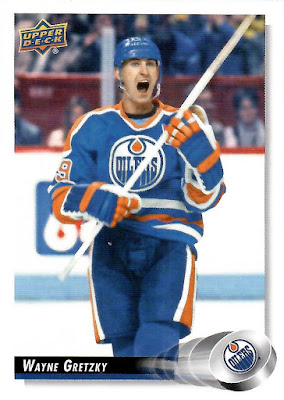 A nice celebration shot on the '92-93 design, though it seems to me that the photo is a little blurry or slightly out of focus.  The first four Upper Deck hockey sets all featured similar white borders, sort of akin to how they got off the ground in the world of baseball actually (the '93 baseball set had white borders too I suppose, but just felt different).  Because of that, I feel like the '92-93 release kind of gets lost or overlooked a bit. 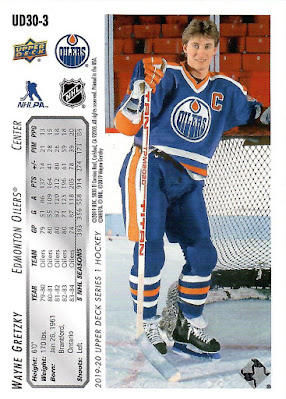 Front and back, this one has the most creative photographs out of the first three cards in this insert set anyway. 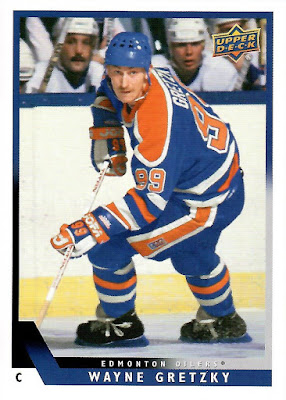 '93-94, the final set in the white border run.  This was always my least favorite of those first four sets.  In fact, I recently made the decision to part with 95% of my cards from this release and they're in my next box destined for Billy of Cardboard History. 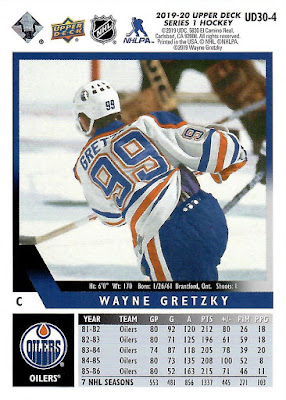 Upper Deck broke from the elongated vertical (most of the time) photograph trend on the reverse in '93-94, and dedicated an even larger portion of the card back to a unique photo that spanned the entire width of the card. 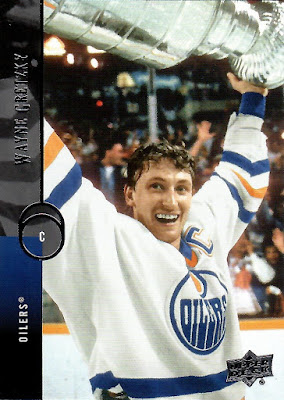 I really dig this tribute to '94-95 Upper Deck hockey.  I'm a sucker for cards that show the greatest trophy in sports, so I obviously love this image even though I've certainly seen it before.  This was a huge departure design-wise from Upper Deck's previous hockey efforts, with only a minimal (and transparent) border on one side.

It was this set that introduced the shortly-lived but highly sought after (at least among me and my collecting buddies) Electric Ice parallels.  It would have been cool and sort of creative if Upper Deck had made a super-rare Electric Ice parallel of this particular insert, but nope. 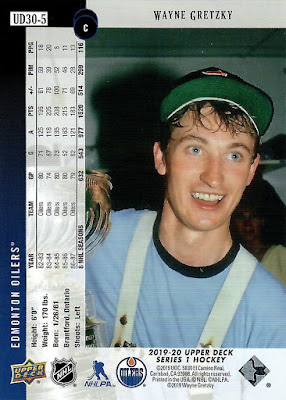 Lord Stanley's Cup again (barely) makes an appearance on the card back here. 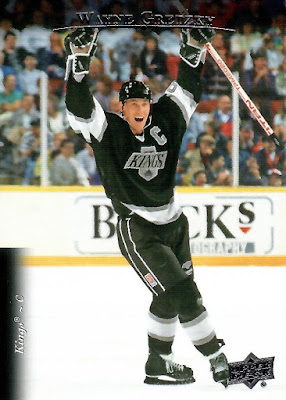 The 1995-96 Upper Deck set is an all-time favorite of mine.  The company went with this simplistic, full bleed design, or a slight alteration of it, across it's entire product portfolio in 1995.  I'm working on both the baseball and hockey sets, and in fact have wax boxes of each in my unopened pack stash.  Upper Deck Electric Ice parallels were back for the second and final year, and this set also had a one-per-box Electric Ice Gold parallel available as well.

Great photograph choice for the design too, almost looks like Wayne is hoisting up his own name, on a metallic silver platter. 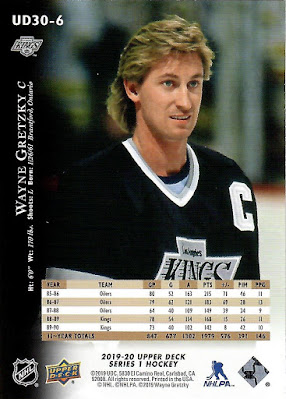 On the reverse, a close-up look at Wayne's legendary flowing locks. 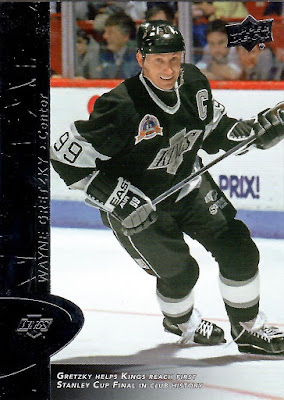 By 1996 I was moving into high school and card collecting started to take a back seat to school work, girls, learning to drive, parties and music.  Because of that I don't have any particular attachment to the remaining four designs here personally.

This 1996-97 set is best remembered as the one that contained a caption for the specific photograph used on the front.  This concept was used in other sports as well by Upper Deck that year, though the specific card designs varied. 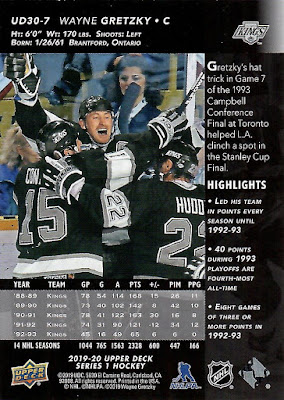 They sure managed to fit a lot of data on the back of a card in 1996-97.  It's actually a decently laid out card back, provided you have 20/20 or better vision! 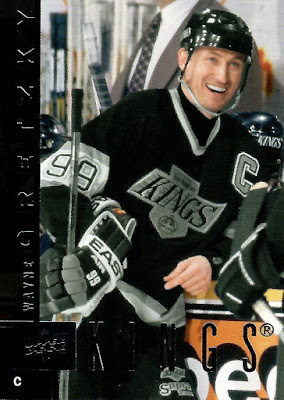 The 1997-98 release was largely forgettable in my opinion, though I'm sure the set has its supporters.  Just really dark, and not very easy on the eyes due to all the foil.  In just a few short years, Upper Deck sure had moved a long way away from those mostly-white sets they began with. 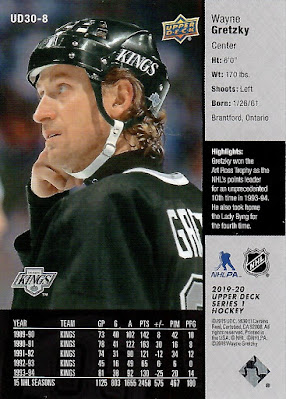 Actually, I just checked, and I do not own a single card from the 1997-98 Upper Deck hockey release.  Not that surprising given my opinion of it, I suppose. 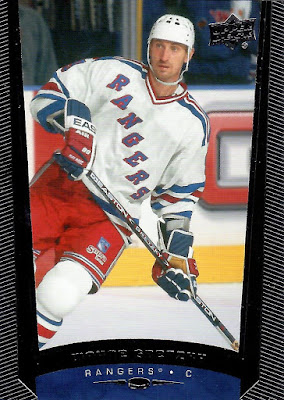 This next card is actually a very close representation of Wayne's 1998-99 Upper Deck card, right down to the photograph in fact.  Here's the original, since I do have a copy: 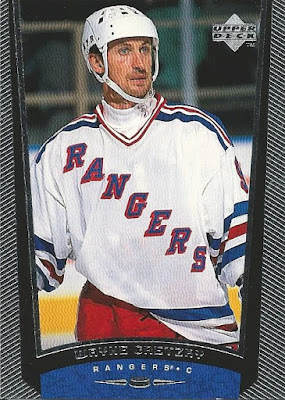 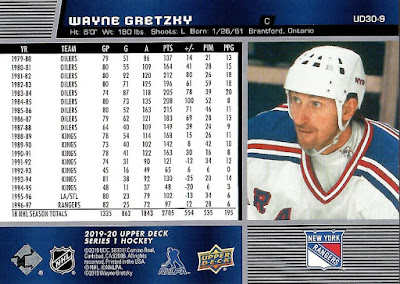 For the sake of completeness, here's the back as well. 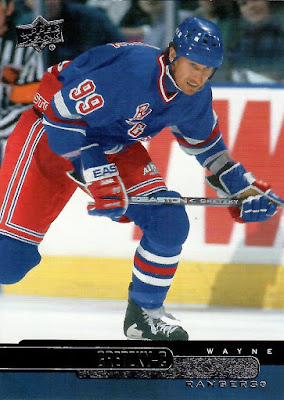 Finally, the tenth card in the insert set, which pays homage to 1999-2000 Upper Deck.  To me, the coolest thing about this one is actually not found on the front, but on the back: 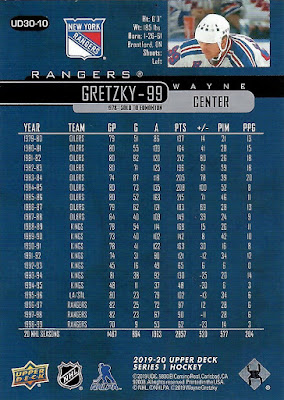 Wayne Gretzky never suited up for another NHL game after the 1998-99 season, which means these are full-career statistics.  A "sunset card" of sorts for The Great One.

These ten new additions to my Gretzky collection were a fun way to look back at the beginnings of Upper Deck's hockey legacy.  While I wish Upper Deck would have varied the subjects for the insert set, I'm nonetheless grateful to have grown my collection of Gretzky through these cards, and at a very cheap price point.

If you're a hockey card collector, what do you think of this insert effort by Upper Deck?  If you're not, do you have a favorite set or insert set that recycles a prior year's design?  Topps Heritage maybe?  Archives?

Thanks as always for stopping by, and stay safe out there!

The first three designs are classic but once Upper Deck went full/partial bleed, a sameness and forgetfulness over took the sets.

Like you I like the overall concept but the execution didn't work out all that well. It would have been more interesting to me to see Gretzky on the current designs and McDavid on the old stuff. They should have done all three designs for all three players and made them more common as well...I got one of each player in my hobby box, the Gretzky being the 91-92 I believe. It ended up not being memorable because it's a design he's already in.

Upper Deck had some clean, solid looking designs when they first started producing cards. The inaugural design is my favorite. As for recycling older designs... I do like the 1994 Parkhurst Missing Link set.

The first two or three cards are my favorites. Wish they would have gone with more player variety though, like you said. (Nice use of "facepalm" there.)

I was very disappointed when UD decided to use just three players for these cards. I picked up a cheap patrick Roy on COMC, but it's the only one that interested me, even at 30 cents. Say what you want about Topps, but at least they'd use 30 different players for something like this.

Not a huge fan of these overall, but still a neat concept. For some reason, I actually like the updated UD logo being placed onto the older designs, especially the silver foil ones.