Think what you will about the guy as a person, but there's no denying that Pete Rose was one of the best hitters in baseball history.  Certainly one of the best contact hitters in the history of the game, maybe the best.  When I first became a sports fan and card collector as a kid, Rose's name was already tainted due to his alleged (and later admitted) betting on the game while still a player and manager.  That didn't stop me from being in awe of who Pete was as a player though, even from a young age.

I understand the gravity of the betting, and that it's clearly a violation of the rules.  I also understand that Rose didn't help his own case at all by denying the accusations for so many years.  On top of that, the guy seems to have a "bristly" personality and doesn't seem very easy to like.  Despite all of that, I wish Pete and Major League Baseball could somehow settle their differences while he's still around to do so.  Just seems like a shame for the sport that the all-time hit king could pass in the coming years without that reconciliation ever happening.  If folks think Bonds and Clemens will eventually get into Cooperstown, then why not Rose?

Anyway, enough about that.  This post is about my second card purchase of the calendar year.  After picking up a Bill Nyrop RC on New Year's Day for 99 cents, I hadn't purchased anything for a few days.  That changed when I got an email that my eBay Bucks certificate from the fourth quarter of 2018 was available, and I had a credit just shy of $15 to spend.  I hit the site looking for a bargain and boy did I ever find one: 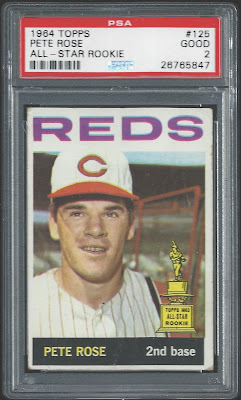 The 1964 Topps Pete Rose "All-Star Rookie Cup" card is finally mine!  This is a card that I have coveted for a good 25-30 years now.  I've watched countless copies over the course of time but for whatever reason was never able to land one until now.  Sure, his 1963 card is his most expensive and desirable, and I wouldn't mind owning one someday, but his '64 is just a much more pleasing card if you ask me.  Aside from being his first solo Topps card, I just love the image and of course the giant rookie cup logo.

I certainly would not have imagined that I'd be landing a copy of this one during what I've dubbed the "Year of Frugality" for my collection, of all times.  How did I manage that?  Well, this is a classic case of a seller just doing an awful disservice to themselves when listing their card.  Check out this screenshot from the completed auction: 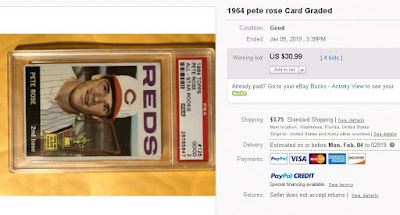 Couple of mistakes here.  First of all, rotating the scan so the card was upright probably would have helped a bit.  The much more egregious error though was simply listing the card with the auction title "1964 pete rose Card Graded".  No mention of PSA, hell they didn't even manage to get the word Topps in there!

Might be a little hard to see, you can click the image for a larger version, but these mistakes led to me taking this card home at the bargain basement price of just $30.99.  Add in my eBay Bucks discount, and I added one of the vintage baseball cards I've always desired most to my collection for less than the price of a retail blaster! 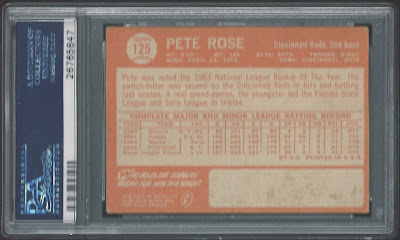 The back of the card is clean, too.  No glue or paper loss or anything of that nature.

In fact, this card is really a perfect specimen for my collection.  A couple of the corners, particularly the upper left and lower right, are touched a bit, but the card looks beautiful and presents really strongly for something PSA considered a "lowly" 2.  I've had the card in my possession for at least a couple of weeks now, and I still grin every time I look at it.  It may only be January, but I'm confident this one will make my Top 19 of 2019 countdown come year end.

Can you think of a time when you scored an amazing deal on eBay thanks to an item being poorly listed, or poorly described?  I'm certainly glad I stumbled upon this one!

Love getting bargains on poorly listed cards. Sometimes I get a bargain on a card because it was listed in the wrong sport or the title doesn't quite match up with the image (the title will say 1974 Topps but the image is 1975 Topps). Sometimes I pass on auctions where the title and picture don't match but sometimes I take a gamble and guessed right as to "which" card was being listed. Another good way to cash in on poorly listed auctions is when the player name is misspelled.

That's a sweet looking Rose card! Congrats on snagging it especially at the price point you paid. As far as finding deals on ebay, I've found a few here and there.

Always great getting a deal, however it comes to be. Wonderful card. I was a fan of Rose growing up as well, and would have drooled over that one for a long time.

Geez, I got all excited, I thought you were going to write about the '75 Rose. Now THAT's a card.

Congratulations! I'm a huge fan of Pete Rose... the baseball player. Hope one day the commissioner will lift the ban. The guy was definitely one of the greatest hitters of all-time. It's kind of a shame he's not eligible to be elected into the hall of fame. If the player's "character" is part of the evaluation process... then why are guys like Tim Raines (played with cocaine in his back pocket), Orlando Cepeda (arrested for drug possession), and Gaylord Perry (known cheater who doctored baseballs) allowed in? By the way... I have nothing against any of these guys. People make mistakes and the bottom line is that they all were excellent players. Okay... it's late... and now I'm just rambling. I hope I'm alive to see the day when Rose is eventually enshrined.

I don't think Rose should be allowed to work in baseball again, but I'm all for letting him in the Hall.

I agree with Brett Alan. And besides, isn't the Hall of Fame independent from Major League Baseball? Regardless, nice pickup on the '64 Rose!

Congrats on the great find!