As I was wrapping up at last weekend's card show, I saw one last monster box on my way to the door that piqued my interest.  It was labeled "Autographs/Game-Used/Stars - All Cards $1".  The table was actually being run by an older woman who had to have been at least 70 years old.  She was a passionate collector, in fact I even heard her get into a debate with a customer as I was scanning through the box about how she can't stand the design of 2015 Bowman.

This was quite a sight!  I started looking through the dollar box, and boy was I glad I did.  I would have to say this was hands down the most stacked dollar box I've ever encountered, period.  Had it been earlier in the show (read:  before I spent the majority of my budget), I would have considered just making her an offer on the entire two-row box.  As it was I grabbed just over 40 singles, for which she charged me an even $40.  So keep in mind that these all came in at slightly less than a dollar per card... 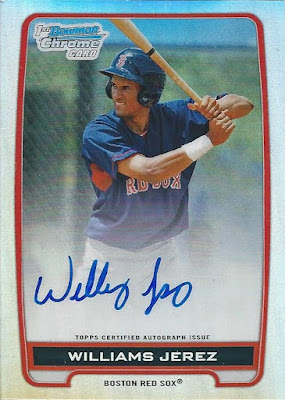 Obviously the autographs were not big stars, let's be reasonable here.  But as someone who enjoys an obscure player almost just as much, there were some goods to be found.  This Williams Jerez, for example.  After two years as an outfield prospect in the Red Sox system, they asked him to convert to a left-handed bullpen arm!  He's done fairly well at it so far too, and was promoted to AA for the 2015 season.  Cool story, the autograph is on-card, and this is actually a refractor serial-numbered to 500 on the back as well.

There were a couple more Red Sox autographs in the box, which of course I grabbed, but before we get to that here are some of my other picks... 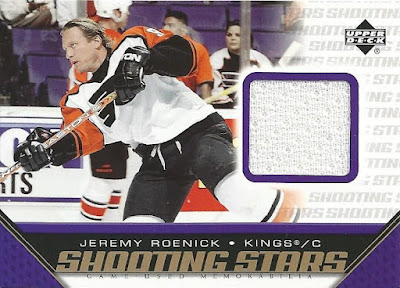 I detest relic cards where the player is pictured with one team, but listed with another.  Still, Roenick was a significant enough player in my youth that I had to grab this card.  I'll probably end up trading it someday, but it was just the case, as with a few of these, that the price was too good to pass up. 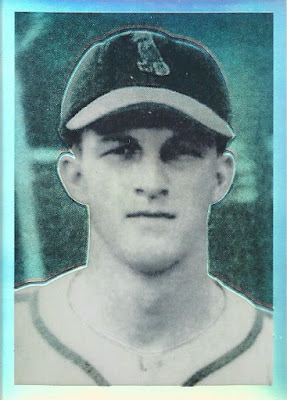 This Stan Musial reprint is also a refractor, and it's serial-numbered to 299.  Beckett lists the value as something like $25, so again I had to grab it.  Not that I care about "book value", which generally speaking I find to be a joke, but I bet I will make a Cardinals fan happy with this one someday. 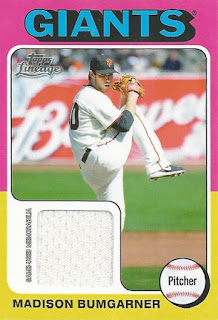 How about a 1975 mini relic of probably the most dominant World Series pitcher in my lifetime so far?  Yes, please! 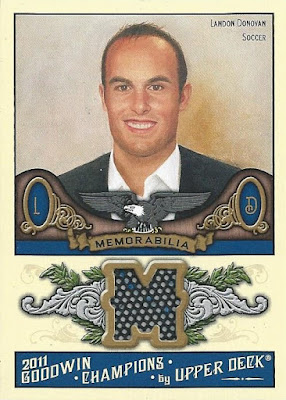 I don't particularly care for the 2011 Goodwin Champions set.  Lack of logos nearly always kills a set for me, but as a soccer fan I thought this was a cool pickup for a buck. 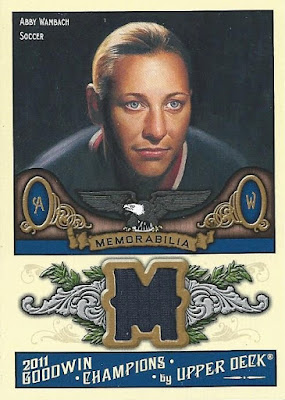 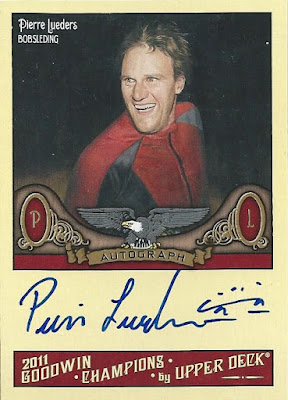 How about an on-card autograph of an Olympic Gold Medal winner!?!?  No, I am not a particularly focused collector. 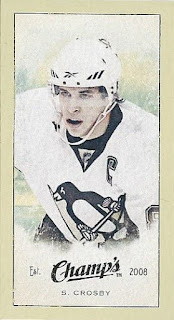 Crosby cards, particularly less common ones, are tough to find at a bargain.  I normally only chase the full-size Champ's hockey cards, but made an exception for Sid. 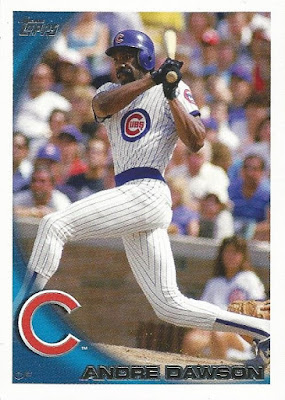 The Retired Legends short print variations that Topps put out for a few years are among my favorite modern-day baseball cards.  I wish there had been more of these available, but I'm happy The Hawk was in the box. 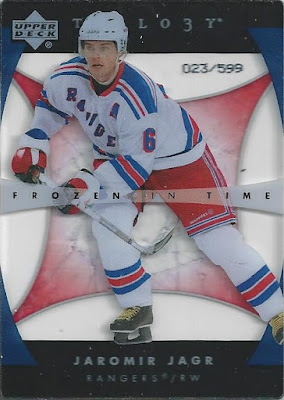 I really, really like the Trilogy Frozen In Time or Ice Scripts cards.  They're super thick, heavy, have rounded edges, and are transparent.  This really gives them a feel as if you're holding a block of ice.  I don't typically see them for less than a couple bucks for any player, but to get one of the greatest scorers in the history of the league serial-numbered to 599 felt almost like stealing.  If you're the sort of person who cares about this sort thing, this one books for $15. 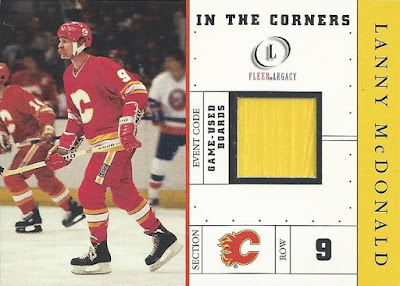 One of my favorite finds of the entire card show was this card.  Lanny McDonald is one of my favorite players of the '80s, and this is also my first "game-used boards" card.  This is a piece of the boards that were in use at Joe Louis Arena in Detroit between 1981 and 2001, according to the back of the card.  Sort of cool to think of how many players and pucks brushed up against or bounced off this in its 20 years of service.  This card is also a little older (2001), from a time before relics had really worn out their stay.  Just awesome. 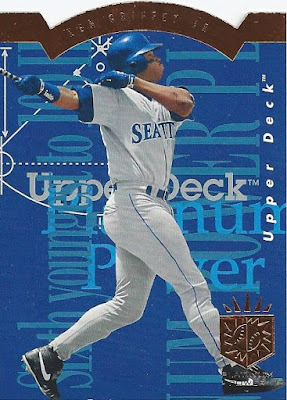 I couldn't pass up this Ken Griffey Jr. Platinum Power die-cut insert from 1993 SP.  Griffey is one of those players whose cards are just very difficult to leave behind when you find them at a good deal. 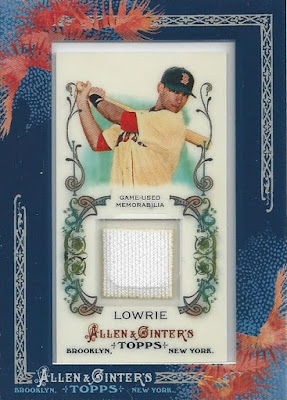 Turns out I already had a copy of this Jed Lowrie relic, but that's no problem as I'll send this off in my next package for Mark Hoyle. 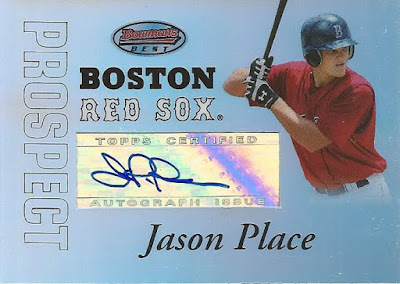 As I mentioned at the outset, I did grab a couple of other cheap Red Sox certified autographs as well.  Jason Place never advanced past AAA before calling it a career back in 2011. 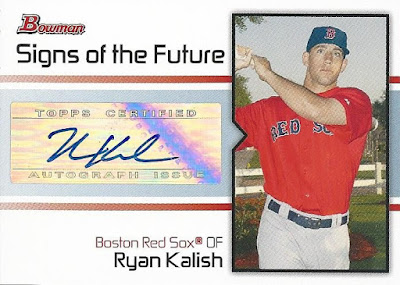 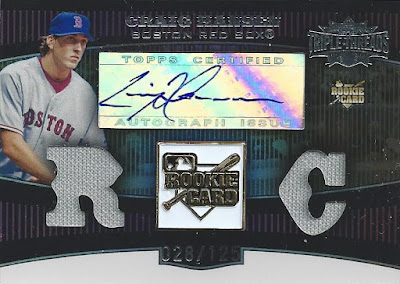 I'll close it out with one of the more high-end pulls of the lot.  This Craig Hansen rookie is from 2006 Topps Triple Threads.  Autographed, dual-relic, manufactured pin, serial-numbered to 125.

I'd say those were some unreal pick-ups for the price.  I've only posted 16 cards here, which means many more than this are destined for folks I trade with.  I'll be spreading the good fortune of the "dollar box grandma" around the community in the weeks to come...
Posted by shoeboxlegends at 3:36 PM

That particular Griffey is a surprisingly tough pickup, too. Congratulations!

Great deals. That women sets up at every show held there. She is more than fair. The Lowrie would be much appreciated Thanks,

Mark, clearly I have to try to get up to Mansfield more often!

Tim, the two soccer cards are yours. Sent you an email...

Looks like a solid dollar box! I'd be all over those legend SPs like the Dawson at that price.

Nice finds, not a fan of the soccer ones (the designs that is, I like soccer somewhat and have a Donovan relic card), but the rest are pretty nice. Good job.

These kinds of boxes are the best kind of boxes.

So many awesome $1 bin finds... but if I had to pick a few favorites, it'd be the Mad Bum and the Goodwin soccer relics. Congratulations!