A quiet Sunday morning spent cleaning up my card desk and putting together a post is one of my absolute favorite activities in this hobby.  Brewing up a nice hot cup of coffee, listening to the birds sing, and scanning and sorting cardboard while my wife sleeps in is basically my ideal way to spend a weekend morning.

Let's take a look at some new cardboard that I processed this morning while doing just that... 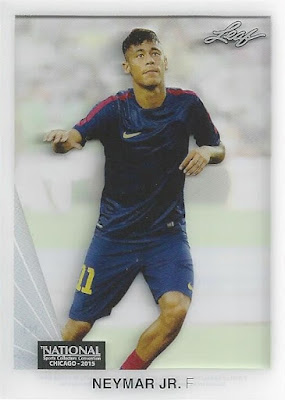 The English Premier League wraps up its 2015-16 season today, so it seemed like the perfect time to get to these soccer cards (even though these guys don't play in the EPL).  They were printed up by Leaf for distribution at last year's National Convention.  The design obviously borrows from the 1990 Leaf baseball set, only these cards are acetate!

This was actually a small, multi-sport set, but the only ones I was interested in were the three soccer cards.  First up is Neymar, who's currently plying his trade for FC Barcelona (who just secured their second consecutive La Liga title - Spain's top football division).  I remember him quite well from the 2014 World Cup. 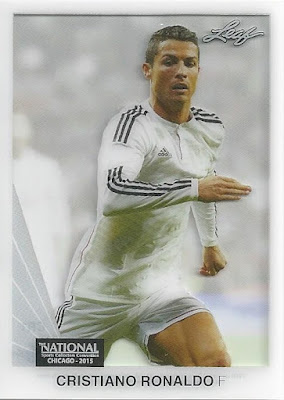 Whether or not you still feel this is the case (and many do), I don't think you can argue against the fact that at some point Ronaldo has been the best soccer player on planet Earth.  Just yesterday he became the first player in history to record six straight 50-goal campaigns (in all competitions). 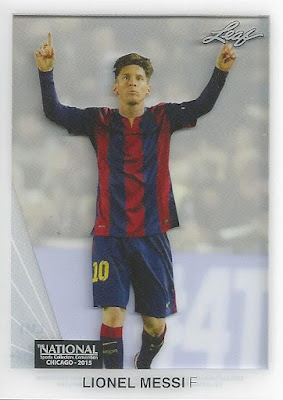 Rounding out the trio is superstar Lionel Messi, who would have to be right up there with Ronaldo in the conversation for best current player.  Lionel is actually a teammate of Neymar with FC Barcelona.  Former Liverpool striker Luis Suarez is on that roster as well; is it any wonder they just locked up their league again with a front three like that?

Alright, that's enough soccer for today.  I really like this effort by Leaf though, and at less than a buck each this trio will make a nice little addition to my soccer binder. 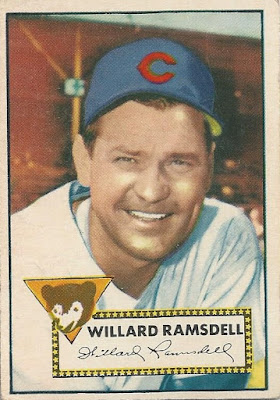 For the baseball fans that survived that soccer lead-in and are still with me, here's a nice vintage baseball card to make up for it.  Willard here joined my collection a while ago as part of a pretty epic antiques store haul, I couldn't leave him behind for the $6 asking price.  I just realized that I showed the first part of that haul off, but never got to the remainder of it.  Hopefully soon! 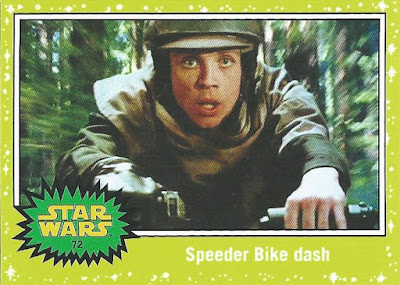 I was a big fan of the Star Wars franchise as a kid, particularly Return of the Jedi.  We had a home-recorded VHS copy that I think we just about wore through the tape on from so many viewings.  The Speeder Bike chases were some of my favorite scenes, so this green parallel from last year's Topps Star Wars offering is a nice random card for me. 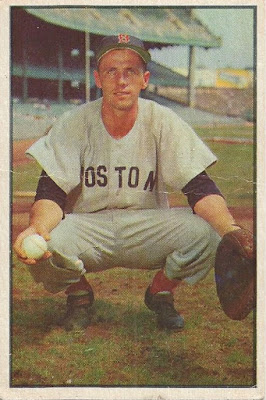 I honestly don't recall exactly where this beautiful '53 Bowman Color card came from.  It's been sitting in my "to be scanned/processed" box for forever now, glad I finally got around to dealing with it. 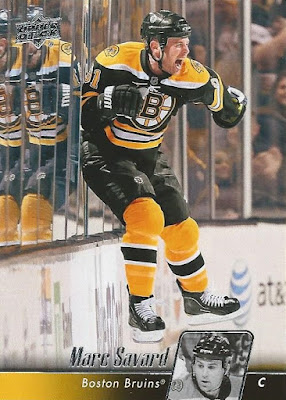 This one came from the quarter box at my local hobby shop, which I have not been to in many months unfortunately.  It's a shame how Marc's career ended, but I'm happy to see that the league has made many adjustments in the time since, and is doing a much better job with player safety in my opinion. 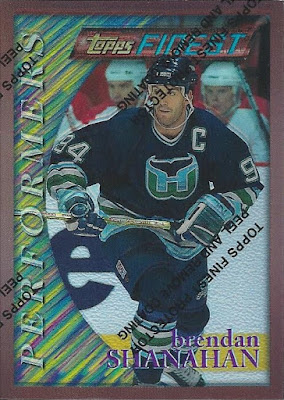 If you collected cards in the '90s like I did, then chances are you're a fan of Topps Finest refractors.  The hockey variety may not be as highly sought after as the legendary '93 baseball refractors are, but I enjoy them just as much.  I recently picked up a pair from the '95-96 set, with Brendan Shanahan being my favorite of the two since it's also a new Whalers card. 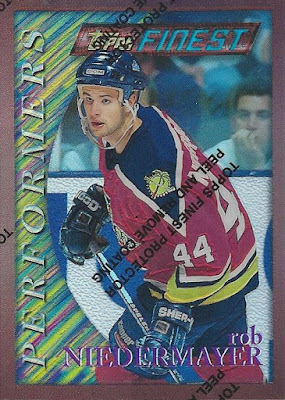 Here's the other one, featuring the "lesser Niedermayer". 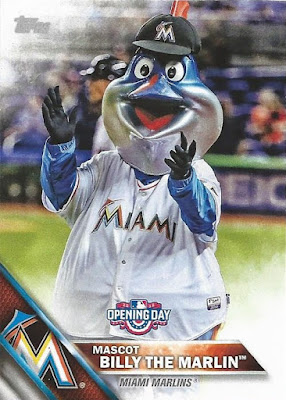 My lone moment of "Blaster weakness" so far this year resulted in some Opening Day.  I didn't feel too guilty afterwards though, since Opening Day blasters are just $10. 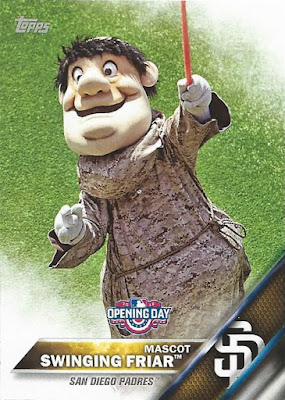 Plus, mine yielded two great Mascot inserts, and a really good amount of Red Sox cards that I may or may not show at some point down the road. 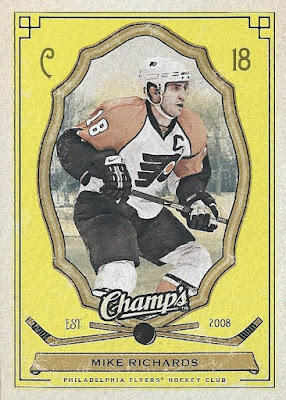 Do you have any hobby projects that you feel like the odds of actually finishing are less than 5%, yet you keep plodding along anyway?  I've got a couple of those, one being the one-per-box 2009-10 Upper Deck Champ's Yellow parallels. 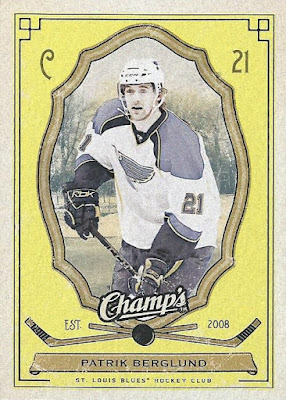 I managed to pick up three of them off of eBay recently, for a buck a piece. 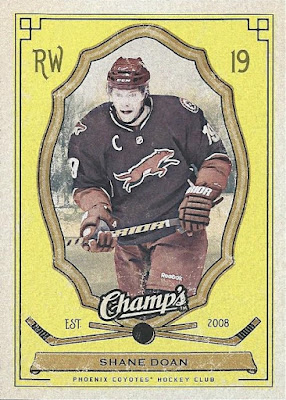 Shane Doan was the biggest name of the three, though I don't think any of them are widely collected guys.  These three put me at 29 out of 100 for set progress.  Getting 29 of these sounds impressive until I consider that I have more than twice that many left to go.  Man these are tough!  If anyone busted any Champ's back in the day and has a yellow parallel or two lying around I am very interested! 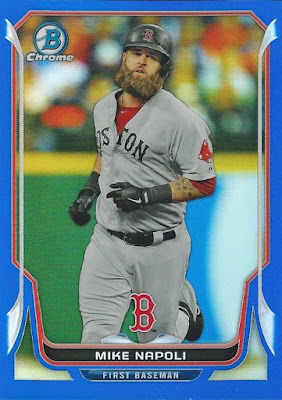 Quite honestly, I have no recollection of where this Mike Napoli parallel came from, and I also have no idea why I decided to bother featuring it here.  It is numbered to /250. 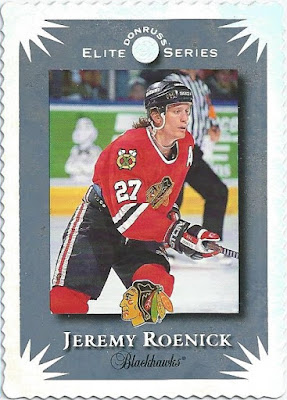 Here's another great highlight of collecting in the '90s, Donruss Elite and its scalloped edges!  These inserts, numbered to "just" 10,000 were all the rage back in the day.  In fact, given how many there are of each card it's somewhat surprising that they still command as much as they do today. 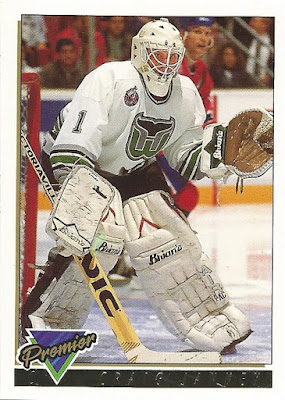 This next one comes from the hobby shop, a great example of a careless mistake (or is it a gimmick card?) by Topps.  Notice anything wrong here?  Well, the foil along the bottom of this Gold parallel says Craig Janney.  In case you're not a hockey fan, Craig Janney never played for the Whalers.  This would be goaltender Sean Burke. 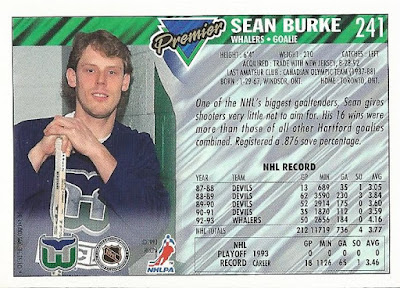 At least they got the back of the card correct.  You know what really sold me on this one though?  Getting the other half of the equation! 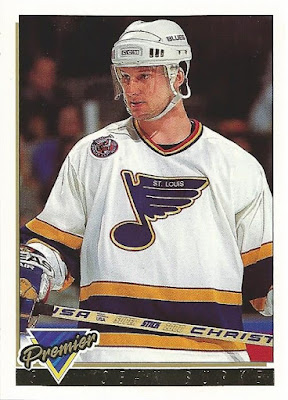 Yup, that would be Craig Janney's card with Sean Burke along the bottom.  I'd definitely never seen nor heard of these before, but I appreciate the randomness.  If nothing else, Topps was consistent in getting this one wrong both ways. 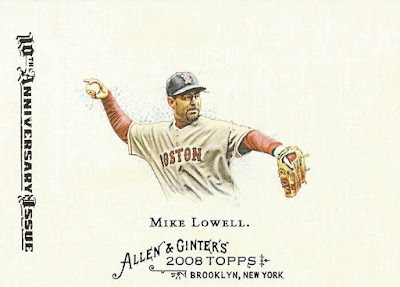 A Mike Lowell 10th Anniversary Issue buyback from last year's A & G set.  Turns out I'm a sucker for more than just the Topps flagship buybacks.  Besides, it's kind of cool that this card was released (for the first time) just a few short months after Lowell's World Series MVP performance. 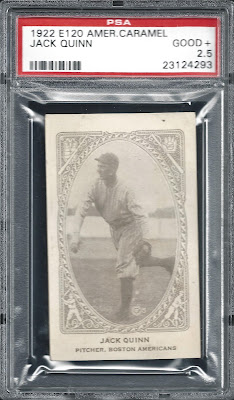 Last card for today, another beauty from the 1922 E120 American Caramel set!  I didn't know it when I purchased the card, but it turns out Jack Quinn (real name Joannes Pajkos) was born is what was then Hungary but is now modern-day Slovakia.  He had an interesting career, pitching in the American, National and Federal leagues. 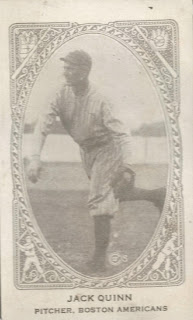 Quinn would play until he was an astounding 50 years old, and was actually the oldest MLB pitcher to win a game for a long time, until Jamie Moyer broke that record in 2012.  A new caramel card, a new Red Sox card, and a new card for my "over the hill" collection all in one, this one is definitely a winner!  This is my fourth Red Sox card from this awesome set.

That's all I've got for today, thanks for reading and happy Sunday!
Posted by shoeboxlegends at 9:34 AM

You've got good eyes if you can read those Topps gold foils. Nice additions to the Whalers collection.

My current set build that I expect to take most of my collecting life is the 2012 Gypsy Queen black minis. Have about 127 of them, which means I still need 223 or so. Even if I snagged all the ones that sell for less than a buck on COMC, I'd still spend $50 or so. One day I'll find a big stash of them for sale cheap and then I'll be able to turn my Have List into a Need List with names.