One of my favorite new blogs to crop up in 2019 is the wonderful Nine Pockets blog.  Gregory, proprietor of the blog, came up with an interesting challenge back in April, which he dubbed The Well Traveled Envelope Challenge.  The idea is pretty simple, re-use the same bubble mailer and mailing supplies as many times as possible to shuffle cards around between card collectors and bloggers.  I recall reading the post at the time and thinking it sounded like a cool idea.

Well, the envelope went first to Gavin at Baseball Card Breakdown.  He turned it around in pretty short order to Angus at Dawg Day Cards, and that's where things started to get interesting!  Angus reached out to me to see if I was interested in being the next recipient.  I told him sure, but on that very same night he suffered a somewhat serious curling injury (yes, Angus is Canadian in case you weren't aware!).

Long story short that delayed things a bit, and thanks to occasional lengthy shipping times between our two countries I got the package back in the first week of June.  The summer is a super busy time of year for me, and by the time I'd unpacked and scanned the contents of what Angus sent me, and then stuffed the team set bags for another collector, another 3 weeks had gone by!  The collector I reached out to didn't get back to me for a few more weeks and ultimately decided he didn't want to take this on at the moment, but this was my fault ultimately for losing sight of this during my busy summer months.

Well, I'm pleased to report that everything has come together now, and after gumming up the works for a full two months I dropped the well-traveled envelope in the mail today, headed off to Chris who blogs over at The Collector! 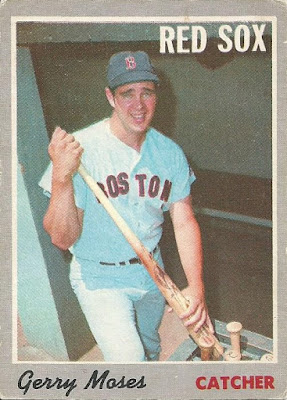 So, what was in the well-traveled envelope when I received it?  Well, coming from Canada it should come as no surprise I guess that it contained a bunch of O-Pee-Chee cards!  Most of the contents were hockey cards, but I did receive this 1970 Gerry Moses for my ever-expanding Red Sox collection. 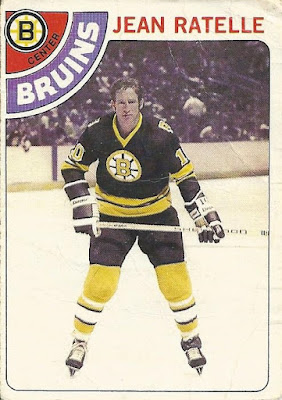 When it comes to vintage hockey cards, my collection consists almost exclusively of Topps and (if you go back far enough) Parkhurst.  I have very little O-Pee-Chee hockey from the 1970s, and Angus certainly remedied that with this delivery!  For example, this Jean Ratelle represents my first card of any sort from the '78-79 OPC set. 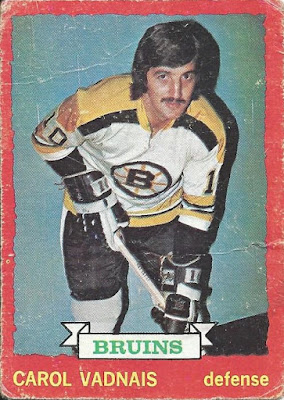 How about a very well-loved Carol Vadnais from the '73-74 release?  Yep, my first OPC card from that year's set as well! 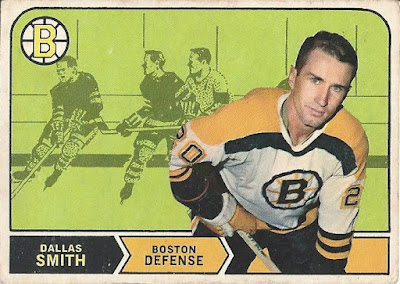 One of the big highlights of the envelope for me was receiving my very first cards from the '68-69 OPC set.  I've got quite a few of the Topps cards from this year, and it's one of my favorite designs in the realm of vintage hockey.  The trio of Bruins that Angus included here are greatly appreciated! 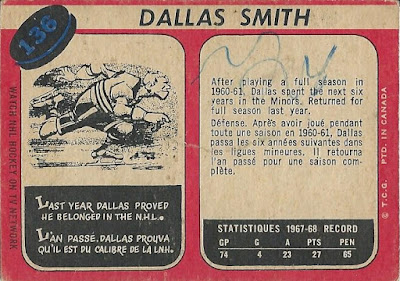 As you can see, someone took a blue pen to the back of Dallas Smith's card at some point, but that doesn't bother me in the least.  It's a very sharp card overall, and I doubt if I'll ever even bother trying to upgrade it. 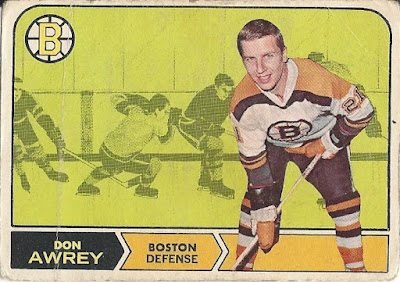 Don Awrey's card is a little more "loved" than Dallas Smith's, but again this is much better than the non-existent copy I owned previously! 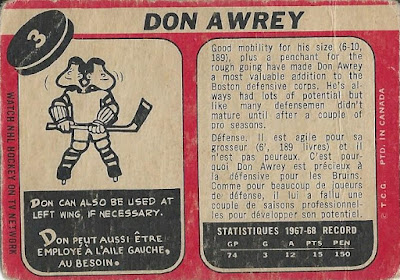 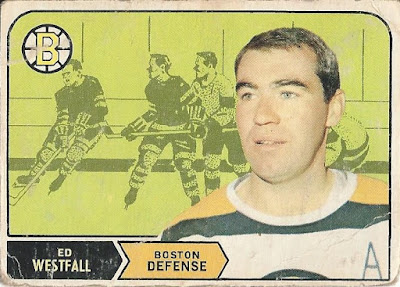 The last of the '68-69 grouping is defenseman Ed Westfall.  I love that poor man's assistant captain 'A' on Westfall's sweater here.  The NHL certainly has come a long way these past few decades. 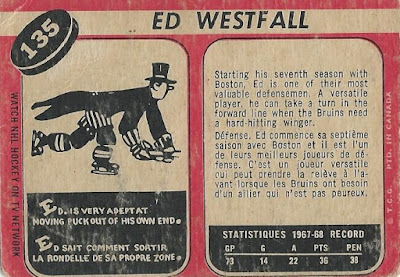 I really wish we got cartoons like this in any modern hockey releases. 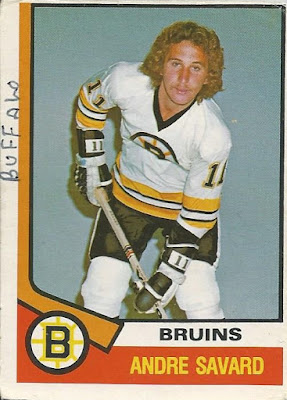 Next up, some 1974-75 OPCs!  I completed the Topps version of this set long ago, but these once again represent my first copies of its Canadian counterpart.  I love that some young fan marked this one up to represent Savard joining the Buffalo Sabres a couple of years after the set was released. 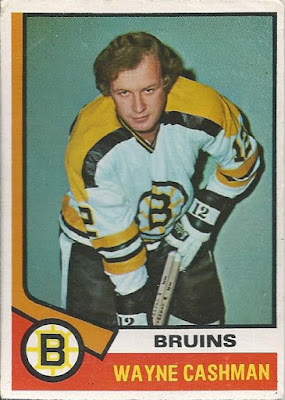 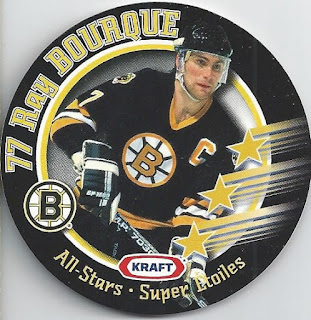 Let's take a break from the standard cards for a moment for a couple of oddball discs.  This Ray Bourque appears to be from a 1995-96 Kraft set, based on the fact that it has '94-95 season stats on the back.  I can't seem to pinpoint it on TCDB though, anyone know exactly what set this is from? 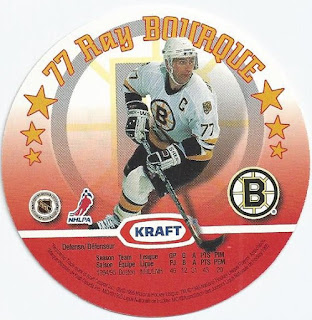 Here's the back, in case it helps any amateur sleuths out there! 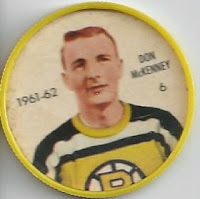 Here's the other disc, a much smaller and older one.  I found out this one is from the 1961-62 Shirriff Coins set.  I haven't had time to research how these were distributed at all, though I've certainly seen them once or twice online.  This is the first one in my collection, and a very cool random addition to my hockey memorabilia. 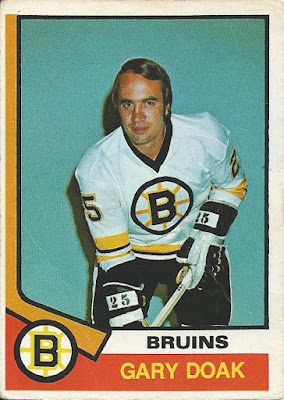 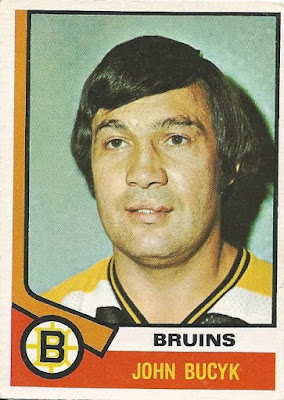 ...and my personal favorite, The Chief, Johnny Bucyk!  This one is in pretty fantastic shape too, other than being slightly mis-cut.  What an awesome card. 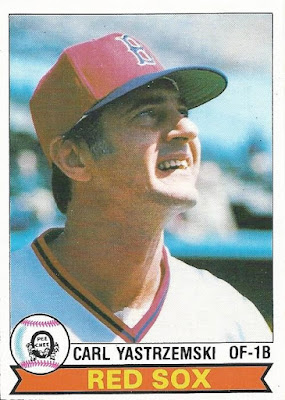 Well, we opened with a Red Sox card, and we'll close with one as well.  I had a handful of '79 OPC Red Sox prior to Angus sending me the well-traveled envelope, but I certainly didn't have Yaz!

So, that's the tale of how I pretty much single-handedly delayed The Well Traveled Envelope Project.  My apologies to everyone for slowing things down, but I want to thank Gregory for coming up with this fantastic idea, as well as Angus for selecting me and hooking me up with all this great cardboard!  I hope Chris enjoys this even half as much as I did! 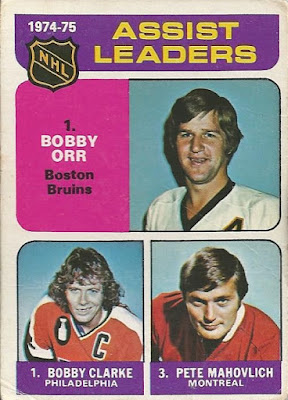 Oh, and I almost forgot, this was also in the envelope.  Are you kidding me?  A vintage OPC Orr, with Clarke and Mahovlich for good measure.  I'm still pretty stunned over this inclusion!  Thanks once again Angus!!!
Posted by shoeboxlegends at 3:46 PM

Glad you enjoyed them and sorry about my delay in getting things to you.

Sorry that so much is so well loved, and has writing. I know it gives then character but that doesn't mean that they aren't a little rough.

I can't really remember, but did you check the Moses card to see if it was also OPC?

You mentioned "Gerry Moses" and "Nine Pockets" and I immediately thought of this:

Very cool stuff! I'll let you know when it arrives. I still have to decide who I'm sending to...

Cool! Glad the envelope is still out there -- and on its way to the next recipient.

Lots of great vintage. The 68-69 OPC's design is pure awesomeness. And the Orr, Clarke, and Mahovlich is cool too.

Hi, this is Bo from Baseball Cards Come to Life (borosny.blogspot.com). I have a ton of hockey cards I am trying to trade for baseball. Would you be interested in trading for any 90s and 00s hockey cards? borosny@gmail.com Thanks!