I'm probably one of the few collectors who is actually pleased about the gluttony of junk wax buybacks that Topps is including in their baseball releases this year.  I'm also very grateful that some other folks out there have thought of me and my buyback franken-set project when they've pulled some of them.  The latest example of that arrived in my mailbox just yesterday from David, aka Hackenbush, of Can't Have Too Many Cards: 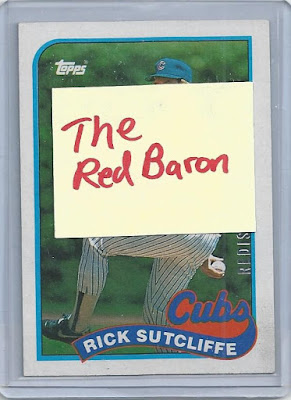 Sweet, an '89 Topps buyback of "The Red Baron" Rick Sutcliffe!  As the title of this post indicates, Rick's card was accompanied by a polite request from Hackenbush: 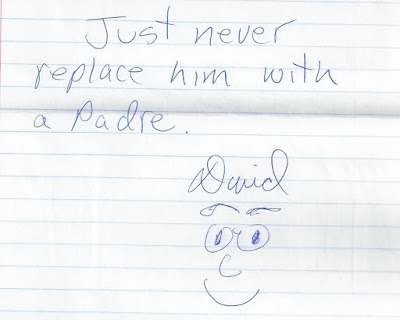 This is an obvious reference to the 1984 NLCS, where Sutcliffe dominated San Diego in the first game, but then ultimately imploded in the 7th inning of Game 7.  Ouch.  Let's peel back the post-it note and get a better look at the buyback itself: 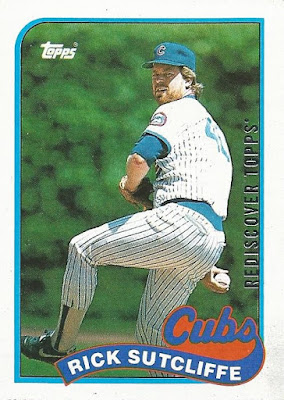 A nice-looking 1989, I love that the "Rediscover Topps" stamp is easily visible against the backdrop of that beautiful Wrigley ivy.  This is my first buyback of Sutcliffe, and it's also my very first 1989 Topps buyback.  Best of all, this is a new number for the franken-set! 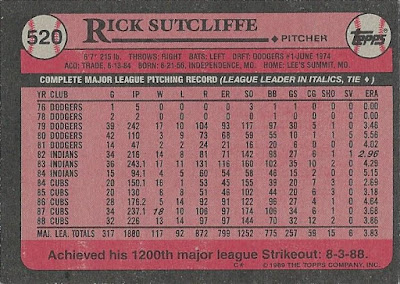 Rick is already sitting snugly in the binder, and I'm one card closer to 792.  Don't worry Hackenbush, I promise to never replace him with a Padre.

This is a buyback addition that I can get behind. 1989 Topps might be a touch blase, but I've always thought that shot of Rick, mind-windup, in the home whites and against a background of vines was just top notch.

I'm with Tony, that's a really great card. Nice addition to the F-set.

Glad to help. Thanks for honoring my request. As I'm sure you well know, the heartache of the past is easier to deal with after finally winning a World Series. Still, all is not forgotten. It's weird seeing the "David doodle" on the screen.

I'm glad you explained the Sutcliffe-Padres connection, because I wasn't aware of it. The only "goat" I remember from the '84 NLCS is Leon Durham.

I think you've got another '89 buyback headed your way.

I like the buybacks. It gives us something "new" to collect of players that we collected years ago!

You might regret that promise if you ever find a 1976 Wille McCovey buyback.