Growing up as a child of the '80s I was, like many kids my age, a huge fan of the Star Wars franchise.  The films from the original trilogy were among my absolute favorite from childhood, and I still enjoy them to this day.  I'm excited that Disney has revived the franchise and have enjoyed their first couple of movies as well.

As a kid my favorite of the original movies was Return of the Jedi; I can still remember the VHS copy that we'd recorded off of HBO when recording movies at home with your VCR was a thing.  I loved the minor bit characters that were used in that third film especially, and today's post features one of those characters: 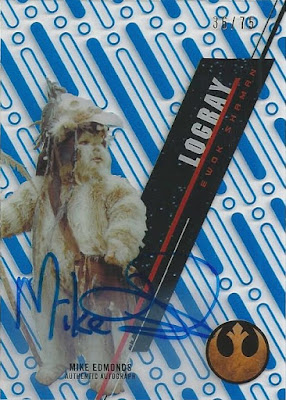 I was pumped to find this on-card autograph of Mike Edmonds, the actor who played the Ewok chief Logray in Return of the Jedi, on COMC for less than $7.  I love the Star Wars Tek product, but $50-$70 for a box of 8 cards with 1 guaranteed autograph is a bit rich for my blood.  $6 and change is much more like it!  This is apparently a Blue Rainbow Foil parallel, which I really don't care about, numbered to /75 in the upper right there.

I loved the Ewok characters and the scenes on Endor at the end of Return of the Jedi in particular, enough so that I actually watched the two Ewok spin-off made-for-TV movies many, many times as well (if you've never seen these I believe they're available on YouTube, though I'd probably only recommend them for a die-hard Star Wars fan).

Anyway, suffice it to say this little autographed piece of acetate packs some serious nostalgia value.  I love finding little gems like this that provide a ton of sentimental value for cheap coin.  Speaking of which, here's a bonus card I picked up from the same seller... 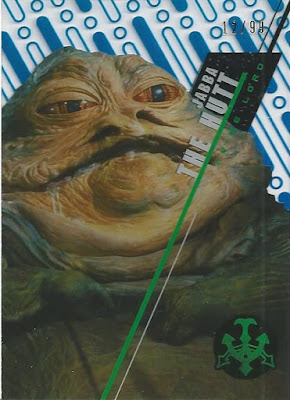 Jabba the Hutt was the star of some great scenes at the beginning of the Return of the Jedi film, and is one of my favorite movie villains.of all-time.  This one's also a Blue Rainbow Foil parallel, though the non-autographed versions are numbered to /99 vs. /75 for the autos.  This card set me back less than half the price of the autograph above.

For less than $10 total these provided a nice walk down memory lane, and will certainly spruce up my binder of random non-sports cards!  Have any of you picked up a box of this stuff, or maybe some singles on the secondary market like these?
Posted by shoeboxlegends at 8:16 PM

Very cool. Return of the Jedi is also my sentimental favorite. Just nabbed my first Tek Star Wars auto a few days ago.. waiting for it to arrive now.

Can't forget, "Ewoks: The Battle for Endor", and Wilford Brimley.

Yup! Watched it a few months ago on YouTube and it brought back some memories.

Star Wars was a huge part of my childhood. In fact... the 1977 Topps trading cards were the first packs I ever opened. I haven't picked added any of the 2016 Tek autographs to my PC... but I've slowly been chipping away at the 2015 Tek set. If you're interested, I showed them off here...

I'm one of the few people who just didn't get into Star Wars. I do like Jabba though.