When Cards Were for Kids 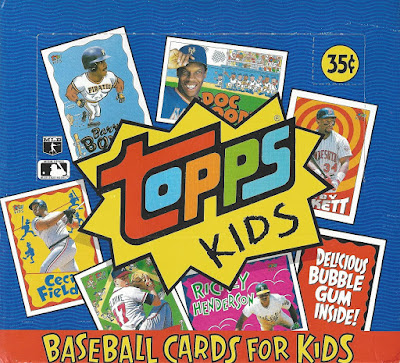 Today's post was inspired by Fuji of The Chronicles of Fuji.  A few days back he posted that he'd picked up a wax box of 1992 Topps Kids for what amounted to around $10 delivered as a sort of birthday present to himself.

Well, I've adored this set since the first packs I opened as a 9-year-old when the product came out.  At one point I had the entire set hand collated, as did my brothers, however my original set didn't survive the passage of time and was lost somewhere along the way.  Fuji was kind enough to include a link in his post to the eBay seller he bought his box from, as some were still available.  Since my birthday was also last week, and since I received a $50 eBay gift card from my mother-in-law, I decided I just had to spring for a box of my own.

Fast forward a few days, and this was waiting for me in my mailbox after work yesterday: 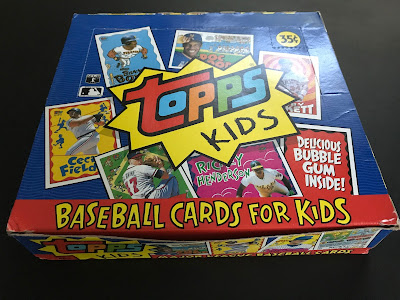 Man, this certainly takes me back! 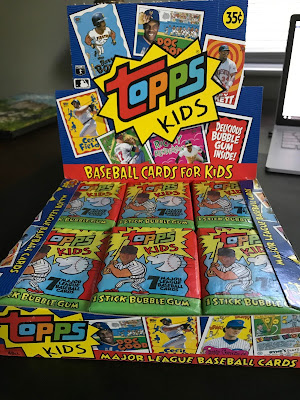 Here's the box propped open, as it would have been in a card shop back in the day where the packs were available for individual sale (at just 35 cents each, I might add!). I'm the type who really strings my unopened product along for quite a while, saving the packs for a rainy day or a time when I need a quick blog post. More on that in a bit, but in the meantime I do usually open at least one pack any time I get a new box like this, so for today I'll do exactly that. 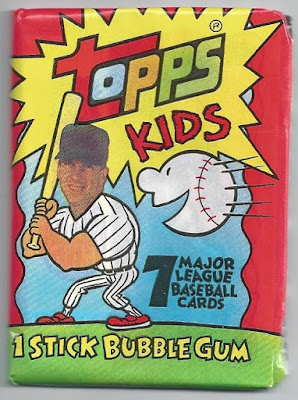 Here's a close-up of one of the packs. Nice old school wax wrapper!  7 cartoon-packed cards and a stick of gum for just a quarter and a dime.  There are just 132 cards in the set, and no short prints, inserts or any gimmicks to be found.  How refreshing.  At a whopping 48 packs per box you should easily come out with at least two full sets, barring awful collation.

One little detail that I love is that the gum is individually wrapped in this creative "Topps Kids" wrapper.  I hadn't thought of these wrappers in ages but instantly remembered them from childhood when I cracked open the first pack here.

Alright, let's take a look at the cards... 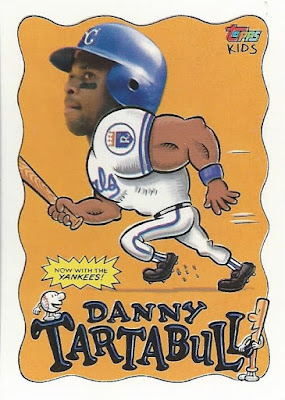 Danny Tartabull leads us off.  As you'll see there are a few different designs used within the 132-card checklist.  This one, which features a photograph of the player's head planted on a cartoon body, is my favorite by far.  Also, I love that since Topps had a photo of Danny's head in a Royals helmet, they went with the same for the cartoon body then used the "Now with the Yankees!" speech bubble a-la O-Pee-Chee. 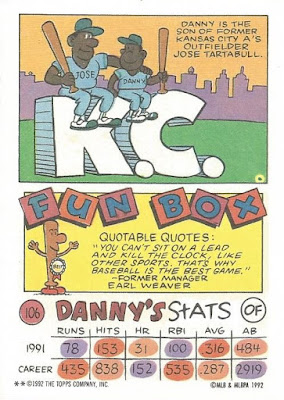 The best thing about the cards in my opinion though are the backs.  Just one year of stats (plus career) along the bottom (which is where you'll also find the card number, oddly).  That's okay though, because remember these are aimed at attracting kids, and the large amount of space up top for a cartoon accomplishes that goal!

The artists that Topps commissioned for this release did a fantastic job.  The cartoons are informative and very well-done across the board.  In between the cartoon and the stats you have a "fun box" with a random quote or fact, which makes sense as a vehicle to get kids to learn more about the game. 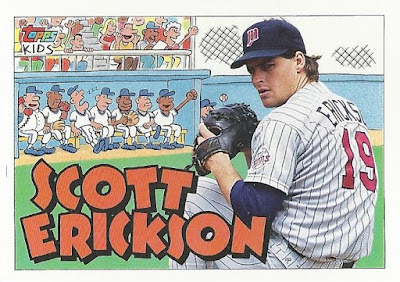 The next design is a horizontal one, featuring a cartoon ballpark backdrop complete with a dugout full of players and some cheering fans.  This is the only one of the designs that is not vertical, which I'm sure would bother some folks with OCD about that but I don't mind. 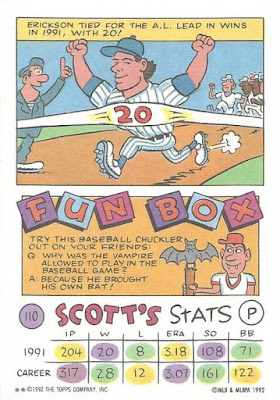 This time we get a (pretty terrible) joke in the "fun box". 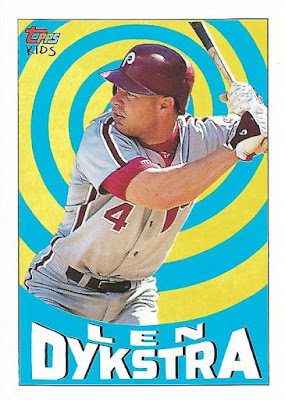 Lenny Dykstra was the next out of the pack, on what is by far the most dizzying design the product has to offer.  Also one of my least favorite designs as it offers very little in the way of cartoon elements. 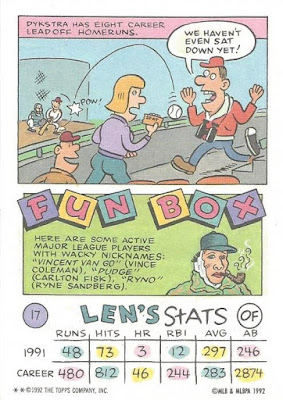 Dykstra does get a particularly creative cartoon on the back at least.  Even the fun box features a cartoon of Vincent Van Gogh in a baseball cap! 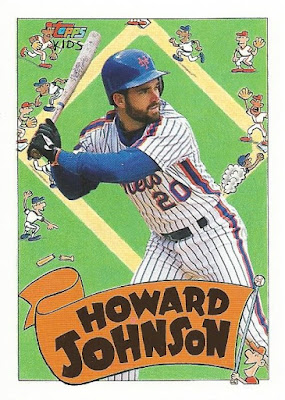 Next, Howard Johnson shows us what I guess I'd dub the "cartoon baseball diamond" design.  That is certainly quite a busy play transpiring in the background.  I really like that the banner featuring the player's name is actually a giant flag being wielded by a cartoon fan.  Awesome stuff. 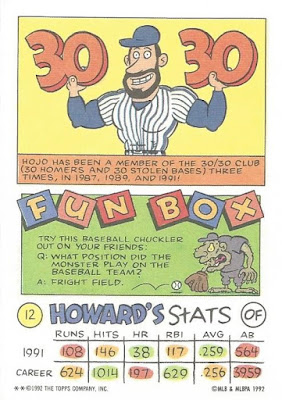 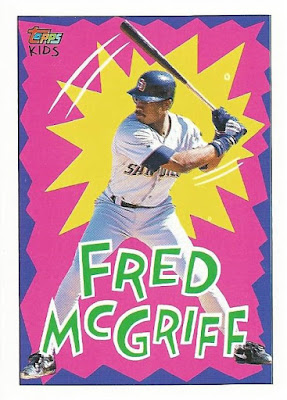 Here's the other design that, like the Dykstra card above, I consider a bit bland by comparison.  Not gonna complain about getting a new card of The Crime Dog though. 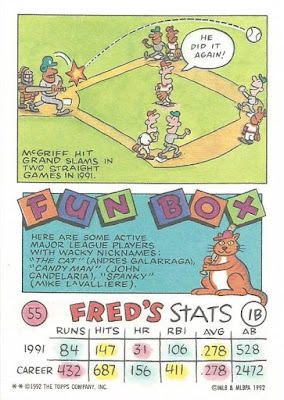 I never knew that Mike Lavalliere went by "spanky".  I guess these can be educational for adults too! 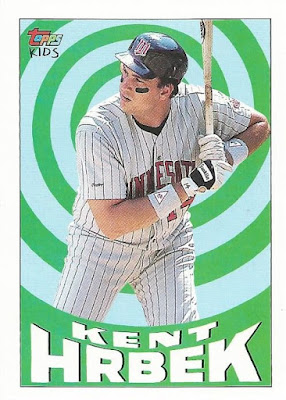 A spiraling Kent Hrbek is our penultimate card for today. 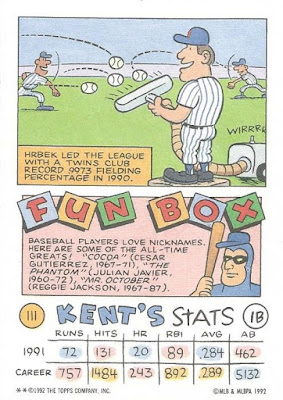 The vacuum cleaner cartoon might be my favorite from this first pack. 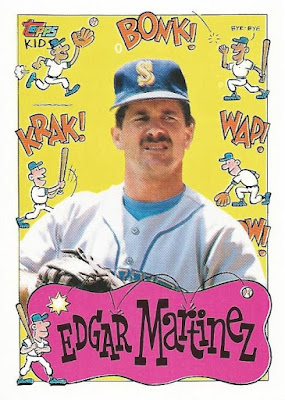 Last card, one of the greatest DHs the game has seen on yet another design.  They didn't do Edgar Martinez any favors with the photo selection I have to say. 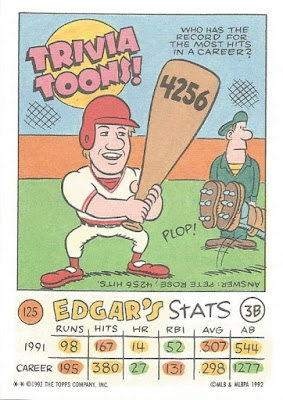 This card back differs from the rest too, as we get one large 'Trivia Toons!" cartoon in place of the standard cartoon and fun box.  Even as a kid I could have answered this one pretty easily.

Well, that's a wrap for today.  As I mentioned above I've become a bit of a "pack hoarder" over time.  In fact, one of the two bookshelves in my office is slowly becoming what I refer to as "Shoebox Legends' Card Shop".  Check it out: 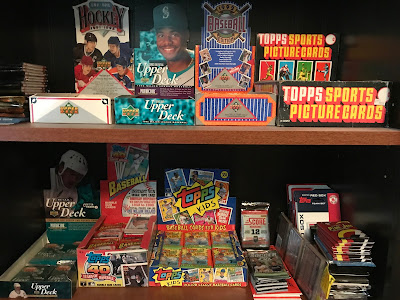 I'm up to more than half a dozen wax boxes on the shelf now, plus a few dozen random packs between the upper left and lower right there (including a few packs of Pearl Jam cards from last year's Wrigley Field concerts that I can't believe I've resisted tearing into for as long as I have).  The Topps Kids box was a perfect addition dead center on the lower of the two shelves.

Thanks for the heads up on this great deal Fuji, this was just an awesome trip down memory lane for me, and with 47 packs still to go I'm bound to get enjoyment out of this for years to come!

I'd love to hear your opinion on this set in the comments.  I would also be interested in knowing whether you've got a "pack stash" like this, or whether you're more the type that rips everything open the moment it's in your hands?  Either way, thanks for stopping by and spending a few minutes of your day here at Shoebox Legends!
Posted by shoeboxlegends at 2:16 PM

Oh man, I forgot all about those. Thanks for sharing!

Very cool. I was too old to get into these cards when the came out, but can appreciate them now.

I've got a blank back of the McGriff card I bought from the Topps Vault. Seems like I'm missing the point buying a relatively very expensive version of one of these cards.. lol.

That's a great mini card shop you've got going there! I've got a small handful of junk packs I've gotten in trade that are sitting around waiting for a rainy day pack war. Plus I've got my "Black Friday" box stockpile that I ration out over the year.

I think it's a fun set. If I had the budget for it I would have gone for a box myself. (I have a few singles somewhere.) I'll have to live vicariously. I like your "store display". My pack stash has lost some, particularly the more valuable boxes, but gained some as well. I'm planning to take some new photos soon. Here's what it looked like four years ago:
http://canthavetoomanycards.blogspot.com/2013/11/do-you-have-pack-stash.html

I was 26 when this set came out, and I really didn't like these at all when they came out, but I've warmed to them some over the years. I like the backs, but there's something about combining the cartoons and the photos that just seems off to me... especially when it's a photo head and a cartoon body. I *do* like the design used for that Scott Erikson, and I see the Doc Gooden card on the box itself and I think "That's a nice-looking card, why do I not have that one yet?"

Fuji inspired me to get a box as well, I was 16 and not collecting when these came out at the time. That being said I probably would have avoided them then, but seeing that Gooden was too much to resist now. The checklist shows several more Mets but 4 packs in and I haven't seen any. I have managed 3 dupes so far though, hopefully that trend breaks and I can get at least one set, with dupes of all the Mets of course! Nice to see I wasn't the only one that had to get some. Wonder if Fuji knows that while he inspires kids during the day he inspires grown men at night?

I have a hand collated set my cousin gave me. I've always liked these

Happy belated birthday! I can't wait to finally sit down and bust open my box... mainly to read those card backs (and build the set of course). That bookshelf display with those wax boxes is sweet!

Great post. Those cards are really fun to look at, gotta love the comics on the reverse. I wish they would have done a set similar for hockey - I would have been so into it, then and now.

I can't believe the amount of wax you have stashed in your office; it certainly does look like a small card shop. I wish I had the willpower to withhold opening up every pack that comes into my grips.

Blogger-inspired shopping, I love it! And you know I'm all about buying cards and memorabilia I had as a kid. Never had these though.. perhaps I was too "mature" for them, as a 12 year old. I think the super premium cards of that time may have turned me off to fun products like this. And I agree with Joe, the cartoonish cards and the real-action photos dont mix well. Maybe the cartoon cards should have been an insert set?

Your wax pack set up is awesome, I wish I had the discipline to do that. I actually tried, when I was about 15 or 16 - but those half-opened boxes didnt last more than a few months. Perhaps I'll try again one day.

I absolutely love Topps Kids, though I don't see them around very often. Most of the ones I own came via trades with other bloggers.

I have no idea how you keep a pack stash like that. I'd bust all those in a wide-eyed, one-night frenzy if something like that was in my house!

Interesting Article. Hoping that you will continue posting an article having a useful information. Cartoon Baseball Diamond