Today I've got a trio of baseball cards joining the project, each of which feature the great Carl Yastrzemski! 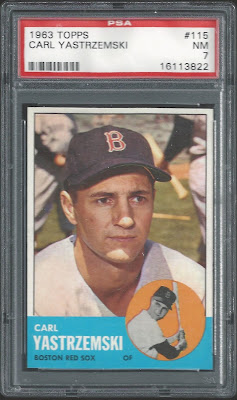 In my last Cardboard Keepers post I chose a Ted Williams card, so it makes sense to go with arguably the second most popular player in Red Sox history this time around with Yaz.  I was a tad too young to ever have been able to see Carl play with my own two eyes, as I'd only just turned a year old when he made his final MLB appearance.  That doesn't mean I don't appreciate the man though, and no proper Red Sox collection could be considered complete without some Yaz representation!

I aspire to someday complete the entire run of Yastrzemski's Topps cards from his playing days, but as it stands now this '63 is my earliest card of his.  An aesthetically pleasing card as 1963 Topps goes, if you ask me. 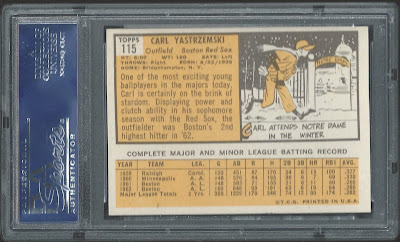 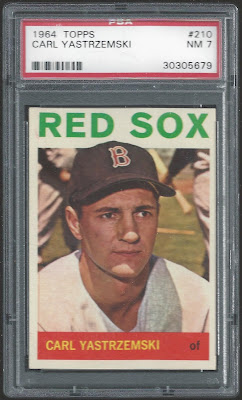 I like the '64 design more so than the '63s, but this one's a bit of a bummer in that Topps re-used the exact same photo from Carl's card the year prior.  1964 wasn't exactly a banner year for Carl either, as his batting average dropped from .321 the year prior to .289.  Not that .289 is anything to scoff at, but a 32-point drop is notable (especially when he rebounded to .312 the following year). 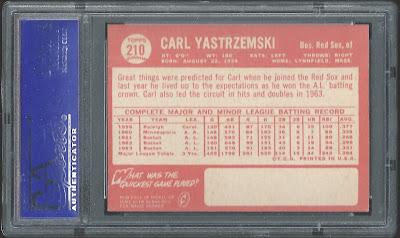 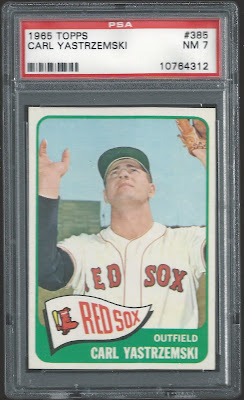 The final card in today's trio may be the most recognizable, as Yaz's '65 release has become somewhat iconic due to the "looking up to catch a pop-up" photograph.

Carl had a monster year in 1965, leading the league in doubles, on-base percentage, and slugging en route to his second All-Star selection and second Gold Glove award.  He finished 10th in American League MVP voting. 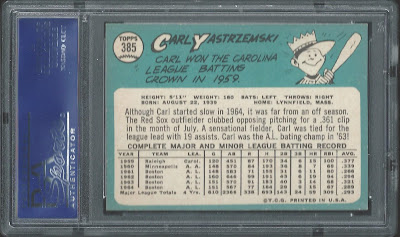 A nice selection of earlier Yastrzemski cards there, and he's certainly someone who deserves a few slots on the baseball side of this project.  The HOFer is the only player in Red Sox history to accumulate more than 3,000 hits while wearing the uniform, and his 3,419 career hits with Boston are better than 700 more than the next closest player on the franchise list (some guy named Ted Williams).

That's 18 cards down in the baseball Cardboard Keepers collection altogether now, 982 to go.  You can see the virtual album here if you're interested.

I'll be back with more keepers soon, in the meantime thanks for stopping by!
Posted by shoeboxlegends at 1:05 PM

Yaz is a definite keeper

Narry a gray hair on his head.

Fantastic Yaz collection! The '65 is my favorite here, even though I prefer the '63 set.