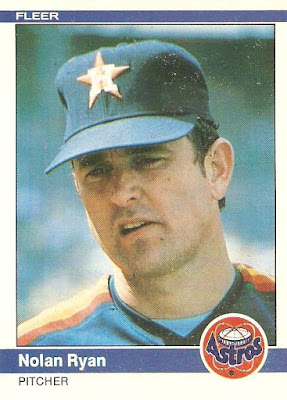 I've been a fan of Nolan Ryan since I was a kid.  He was really the first baseball player I ever collected, and was a big part of the first set I ever collected as well thanks to his 5-card tribute at the beginning of the 1990 Topps checklist.  Since I returned to collecting as an adult I've made it a point to grab a bunch of his cards, but only recently did I land one that I've been fascinated with for a good three decades.  Allow me to set the stage... 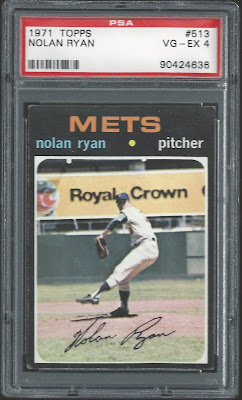 I'm honestly still stunned that I finally have my very own copy of this iconic card after all these years.  Nolan was just 24 years old for the 1971 season, and was still figuring things out in the early part of his career.  Though fully converted to a starter, he posted just a 10-14 record with a 3.97 ERA in his final season with the Mets.  He'd yet to lead the league in any statistical category, hadn't thrown a no-hitter, and was yet to be named an All-Star, but as we know now there were many successful years still ahead!

His 1971 Topps card is one of the more desirable and valuable cards in the set, and is well known for the large, bright Royal Crown Cola advertisement above the outfield fence in the background.  I love that the photograph was taken from the perfect angle to have Nolan's head land between the two words, leaving the advertisement virtually un-obscured.

This can be a pricey card, which is the main reason I'd never ended up tracking one down after all these years.  I thought this copy looked absolutely fantastic, very well centered, good color, certainly good corners by 1971 Topps' tough standards.  Quite honestly, I'm astonished that this graded only a "VG-EX 4". 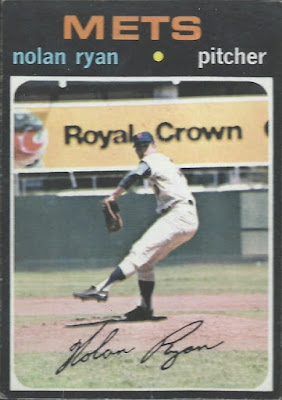 Here's a better look at the card.  One of the best known cards of the decade that was the '70s, and now my oldest Nolan Ryan card.  His first three Topps releases are high on my dream card list, as was this one prior to 2019. 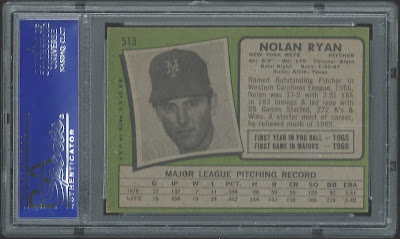 Here's a look at the back, in great shape as well.  I'll tell ya, if this is a PSA 4 I'm certainly going to be picking up some other HOFers from this set in this grade!

With that, my first $100 Amex gift card is effectively toast ($.01 balance remaining), but I couldn't be happier with the results!  I got a $50 Amex card with it if you recall though, and used that on a pair of singles I'll be showing here in the coming weeks.

Thanks for stopping by!

Congrats on such a classic card!

That's one of my favorite Nolan Ryan cards. I picked up a PSA 4 copy myself last year and couldn't be happier. Looking forward to seeing the final two cards from your Amex GC Shopping Spree.

Awesome! I bought my '71 Ryan off COMC as well. Mine set me back all of $5, though it does have about 844 creases and dings.

Great pick-up, for sure. Nolan's got some good cardboard out there, and the '71 is definitely one of them.

Fantastic! The day is coming when I get serious about finishing off some of my pre-1972 Mets team sets, and at that point I'll have a bunch of Ryans to fit in my budget. I'll most likely end up with something like what Nick got on COMC - something which had been closely associated with back pockets or bicycle spokes early in its life. :-D