Coming out with a big gun for the first Signature Sundays post of the year, and of the decade.  Yes, it's one of the all-time great defensemen in NHL history, Bruins fan favorite and member of the hockey Hall of Fame, Ray Bourque! 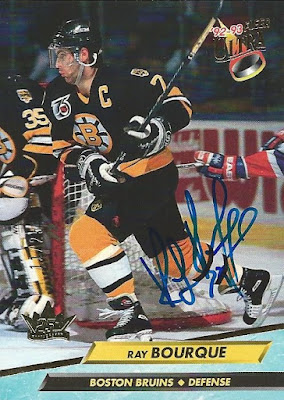 I'm genuinely ecstatic to have obtained a copy of this card.  Though I was a die-hard Whalers fan for much of Ray Bourque's NHL career, even I had to respect the clear-cut best defender (and best overall player) on their arch-rival team, the Boston Bruins.  Ray's legendary career in Boston included over 1,500 points scored in over 1,500 games played.  To this day he has more career goals, assists, and points than any other defenseman in NHL history. 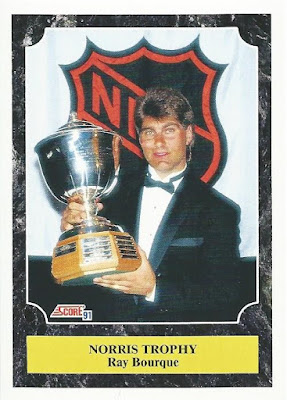 Bourque won a Calder Trophy as Rookie of the Year, five Norris Trophies (awarded to the NHL's top defenseman, if you didn't know), and finished in second place for the Norris a further six times.  Just let that sync in for a minute.  If you ask Ray though I'm sure the one statistic that stands out above all others is the single Stanley Cup that he won at long last in the final game of his career, with the Colorado Avalanche.

As for the card, this is my latest in a small grouping of these '92-93 Fleer Ultra buyback autos that were included in the 2016-17 Fleer Showcase set from Upper Deck.  The standard buybacks and these autographed ones were tough pulls, serial-numbered to just /25 each (tough to see the numbering along the lower left edge of the card, but this one's 11/25).  A nice on-card autograph, and Ray did a great job keeping it within one of the lighter sections of an overall darker photograph. 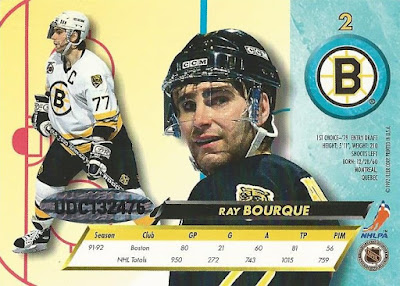 As is customary with early '90s Ultra, I have to show the fantastic card back.  The only difference here from the original is the authentication hologram from Upper Deck.  Which of course... 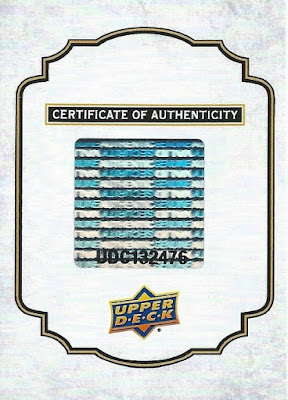 ...links the card with the associated CoA. 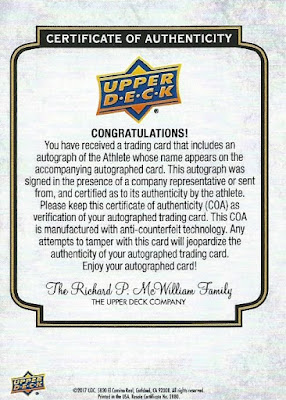 Generic, boilerplate language on the back of the CoA.  You get the drift...

So, there's one of my absolute greatest hockey autograph scores of the past few years.  I can't promise that every Signature Sundays post this year will be this exciting (or even half this exciting), but I wanted to kick things off with a significant one.  I'd say this fits the bill, and there's a high likelihood that this card will make another appearance at the end of the year in my "Top 20 of 2020" countdown.

Thanks as always for stopping by.  I've got more content queued up for throughout the coming week, and another autograph ready to go for next Sunday, so swing on by any time.  Until then!
Posted by shoeboxlegends at 10:30 AM

Sweet Bourque. As a guy who loved collecting hockey cards in the 90's, his cards always seemed to be some of the most desired among defensemen. I personally couldn't afford many of his nicer inserts, but I picked up a few cool singles over the years when they were affordable.

You know, I definitely appreciate the '92-93 Ultra hockey set a lot more thanks to your posts that feature cards from the set -- and this autographed version doesn't hurt! Great pick-up for your collection, congratulations.