Shiny from All Sports

Still around and still collecting, have just been using my hobby time to further organize and condense, and after taking a break for the holidays have started rolling with some eBay selling/flipping to reduce clutter and target some really big cards.  If you stop by here with any frequency then you know this strategy worked out amazingly for me last year, and I'll just say for now that I'm off to a similar start in 2021!

Since it's been over a week though since there was any activity here, I feel compelled to post something.

So, here are some shiny cards that have shown up here at Shoebox Legends headquarters in the past week or two.  Cards out, cards in, my collection has very much become a revolving door, and I'm having a blast with it... 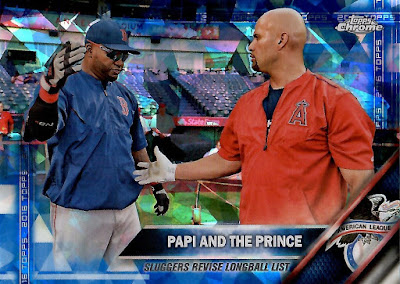 As a fan of all cards that use Atomic Refractor (or 'Ice' in the Panini vernacular) technology, I really enjoy the Topps Chrome Sapphire releases.  Most years they are fairly limited as far as print run, and out of my price range when it comes to unopened wax, but I will scoop singles up cheap on the secondary market if the opportunity presents itself.

This David Ortiz/Albert Pujols is technically a checklist card, but it was $2 on Sportlots (plus pocket change for shipping) and features two of the absolute best hitters of their era.  I think the 2016 version of this set had a print run of just 250, so this is a cool addition to my shiny card binder.  Over 1,200 Major League home runs represented on this card! 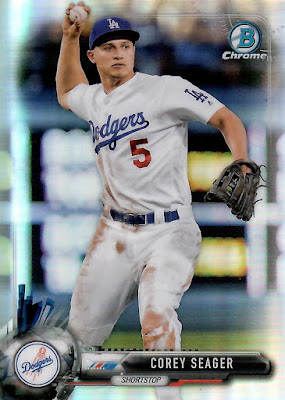 Here's another one for that shiny card baseball binder, featuring one of the darlings of the 2020 post-season.  This was an add-on to an eBay purchase late last year, for a buck with no additional shipping.  Numbered to /499 on the back. 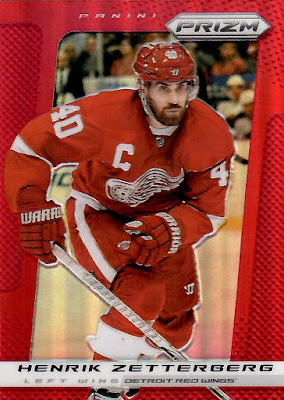 I love shiny Prizm cards, in fact we're about to go on a small run of great Panini cards in general.  Panini's NHL license was short-lived, but one of my favorite sets that they produced while it lasted was the 2013-14 Prizm release.  If I can get a legit star on a team-color-matching Prizm parallel from this release at a good price, I'm absolutely sold.  Henrik here, in glorious red-on-red, was available on Sportlots for just a dollar. 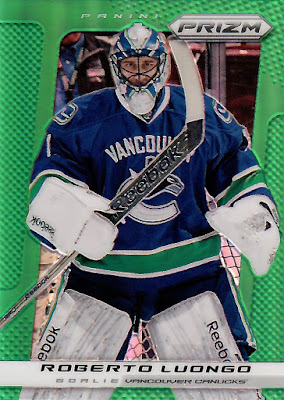 The same seller had this Green Prizm Roberto Luongo available for a buck as well.  Both guys are right on the cusp as far as whether they'll be inducted into the Hockey HOF, but one thing that's not up for debate is now nice all that shiny green looks with that modern-day Canucks uniform!

Landing a Crosby or Ovechkin parallel from this release is pretty high on my hockey to-do list, if anyone reading this should happen to have one, I'll pay handsomely in trade... 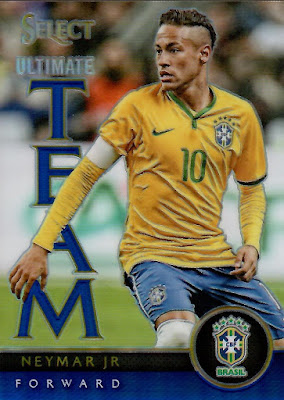 I mentioned a post or two back that I purchased some 360-card Z-Folio binders on Amazon, and am hoping to fill one each with my collections of my lesser-collected sports.  So, one binder full of only soccer, one football, and one basketball.  I ponied up a full $9 via eBay auction for this 2015 Select Ultimate Team Blue Prizm Neymar card (#'d /299), mostly because I think the blue looks fantastic with this particular photo.  This card pops in hand much more so than it does in this scan, though it doesn't look half bad here either.

$9 is more than I'd like to spend filling a slot in the soccer binder, but 2015 Select is really prized among soccer collectors, and Neymar is one of the best players in the world, so here we are. 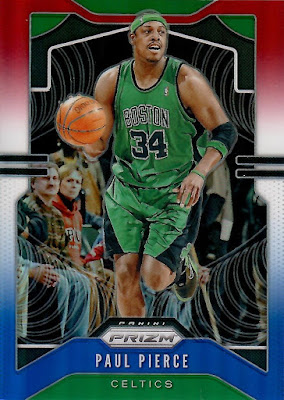 Got a couple new cards in for the basketball binder as well!  I mentioned when I picked up the Pink Ice version of this 2019-20 Paul Pierce recently that I'd like to complete an entire 9-pocket page featuring different versions of the card.  Well, here's the Red, White & Blue parallel, had for a mere 50 cents. 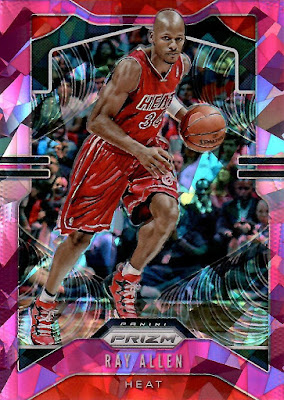 While I was it it, here's another one of those fantastic Pink Ice parallels, of Paul's one-time teammate with the Celtics.  Growing up in Connecticut, Ray Allen was a household name as a big star at UConn.  Definitely wanted to have him represented in the basketball binder.  As for why I chose this particular card, see my comment at the outset of this post about my love for Panini "Ice" cards.

By the way, everyone says basketball is so expensive, but this card was 40 cents?!?! 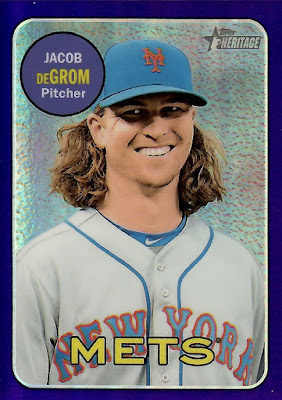 If you've made it this far, I'll reward you with a couple more baseball pick-ups to close out the post.  A Jake DeGrom 2018 Topps Heritage Chrome Purple Refractor here.  This was a perfect pick-up off of Sportlots now that I've started a Z-Folio dedicated entirely to purple cards, especially since 2018 was the first of his back-to-back Cy Young seasons.  I'd like to get a 2019 version of this to go side-by-side with this one in that binder. 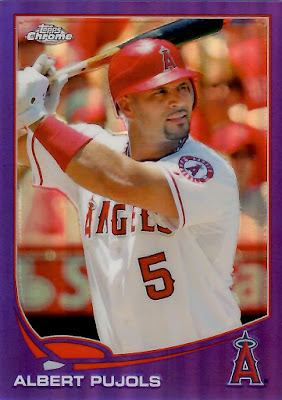 We started with Pujols, and we'll end with Pujols.  The Topps "white border years" provided some of the best colored refractors in baseball card history if you ask me.  Shelled out $2.50 for this card, and I'd have bought 9 of 'em and filled a whole page at that price if I could have!

That's a wrap for tonight, getting late here, and I'm off to watch the rest of this train wreck of a football game.  Thanks for stopping by to check out my shiny cards, and stay safe!

Posted by shoeboxlegends at 10:00 PM

Your scanner does a great job of getting your refractors and prizms to shine.