Welcome to the latest installment of Cheap Slabs, a recurring series of posts where I attempt to show that collecting graded cards does not necessarily need to be an expensive pursuit.  Ground rules for these posts are simple; the card(s) shown have to have cost me less than $25 before taxes and shipping.

Today's card actually represents my final purchase of the dumpster fire of a year that was 2020, as I picked up this shiny HOFer on the very last day of the year... 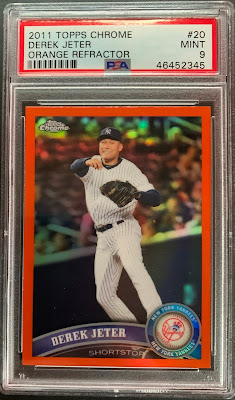 I'm not one of those Boston Red Sox fans who "hates" the Yankees.  In fact, as a fan of the history of the game, I actually respect the organization a great deal.  On top of that, out of the many, many HOF stars who have donned the pinstripes over the years, Derek Jeter is certainly one of my favorites.

As a kid who collected in the early to mid '90s, Jeter was one of the biggest rookies/prospects of the era.  Even though I'd never seen him play a game at that time, I knew from talking with my friends, reading Tuff Stuff magazine, and checking out the display case at the local card shop, that Derek was a big deal.  Later, in high school and college, I'd watch him grow into a leader on a team that won four World Series championships in a five-year stretch.  Then, as an adult, I witnessed him win another championship for New York, and accomplish the famed 3,000 hits (which he crushed, finishing 6th all-time in hits).  Hard not to respect a guy like that.

Combine all of this with my love for shiny cards, and for the colored refractors from the Topps white border years in particular, and I was absolutely helpless in the face of this fine PSA 9 a few weeks back. 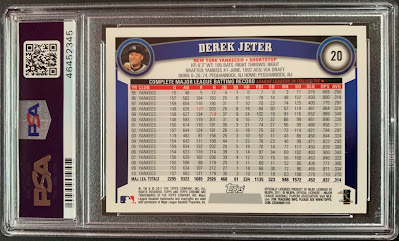 Here's the back, you can click the image for a larger version if you'd like, but trust me that there are a lot of italics, bold, and even some red to be found in that statistics table.

Always liked the layout of the 2011 set.  Always liked the 2011 set period, actually.  One of the best designs of the 2010s, the beautiful Cognac and Platinum Diamond Anniversary parallels (including retired legend variations) in the base set, Chrome Atomic Refractors that were slightly more plentiful at 225 copies each, and of course the famed Mike Trout.  Yeah, 2011 was a great year for Topps flagship/Chrome! 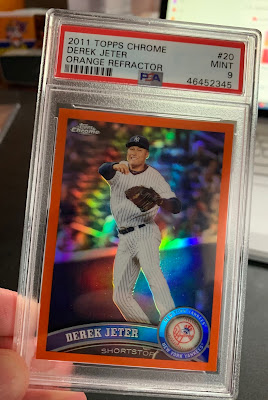 Here's a great look at Derek in all his shiny glory.  A great-looking card if you ask me.  I still want to get a really nice Jeter RC (or two) for my collection, but in the meantime I'm happy to have snagged this card on the cheap.  Have a feeling it's going to be hard to find his refractors graded at less than $25 once he finally gets inducted this upcoming summer.

That's all for now, thanks for stopping by to check out my cheap slab.  Stay safe out there!

Posted by shoeboxlegends at 8:30 AM

I used to have a saved search for Jeter graded rookies, but dumped it about a year or two ago after prices got to the point where I didn't feel they were reasonably priced.

2011 is a favorite design of mine. Not a bad card. I'm Red Sox guy who luckily isn't a fan of many Yankees players but that wouldn't keep me from picking up cards I like. Good post and I agree there are cards out there at good prices to be had.