The GREATEST "Coffee Table" Book Ever! 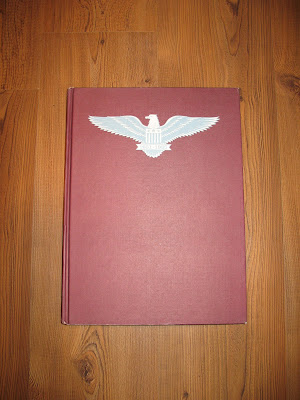 Yesterday I received a package that I've been anxiously waiting over a week for. A large box was dropped at my desk containing a book that I've wanted for a long, long time. Some of you may recognize this book, some of you may not. Do you know what it is? Here's a close up of the logo from the front...

A nice emblem featuring a bald eagle holding a banner with the years 1951 - 1985 inscribed. Know what it is yet? The year 1951 should be a big hint, in case the fact that this blog is about sports cards wasn't enough of one... 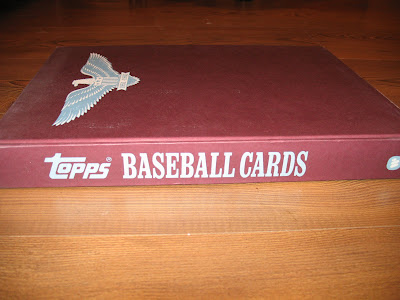 This is a hardcover volume that is basically the ultimate reference book for baseball card collectors and baseball fans. Let me start by saying that this thing is absolutely massive. It measures around 10" x 14", is probably 2" thick and weighs over 10 pounds! I took another pic with a card on top so you can see just how large this thing is. 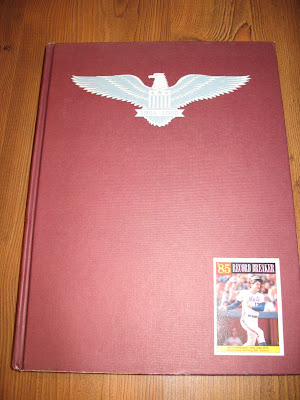 The book starts with a forward by Willie Mays, which is pretty cool. Only 2 pages but it's interesting to read his take on baseball cards. After that comes the good stuff, full color pictures of the front of every single Topps card released from their very first cards in 1951 through the 1985 Topps set!!! Each year begins with a 2 page summary of what transpired during that particular baseball season, everything from league expansion and team moves to highlight records, etc. 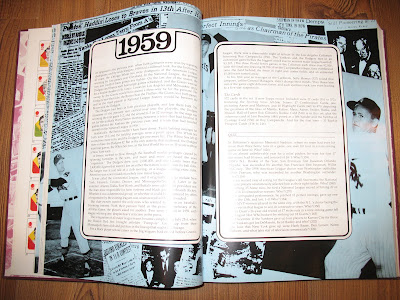 This makes the book not only an awesome reference for collectors, but a good resource for fans of the game in general. One of the reasons I enjoy vintage cards so much is because they are like a historical record of the game, and having a summary of each season before the pictures of the cards is a nice touch. OK, here's a shot of the good stuff from the 1965 Topps section, check it out! 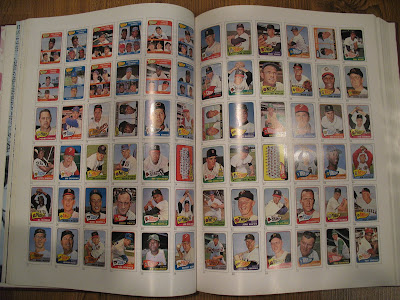 If you click the image you'll get a nice large picture to get a better idea. A nice simple layout with just pictures of the card fronts with the card number underneath. I like this minimal approach where the attention is not on the formatting or layout but on the cards themselves. Not only do you get pictures of every Topps card issued during their first 35 years, but there is also an index in the back with full career stats (or stats through '85 if the player was still active) of every player featured on so much as a single card. In addition to the career stat lines you also get a breakdown of card numbers for that player by year so that you can easily locate a players card from any year within a matter of seconds.

This has instantly become one of my favorite books, I'm sure I will spend countless hours pouring over the pages in the months and years to come. This will definitely be a part of my library as long as I'm collecting. If you collect baseball cards and don't have this book, you owe it to yourself to pick up a copy. The book is out of print so you won't find it at your local bookstore. Used copies on Amazon are listed at pretty outrageous prices, but there are usually one or two copies listed on eBay and you can get one at a decent price if you look around. My copy is in great shape, with all pages and binding in pristine condition and only some very slight wear along the bottom of the cover where it was probably slid in and out of a bookshelf. With shipping I paid around $30.

Well...what are you waiting for?

Posted by shoeboxlegends at 10:05 AM

I love this book. But never get around to buying it (I've let people I know I'd like it for a gift, but 3 years later, nothing).

I first came across it in a second-hand bookstore when I was vacationing. I looked through it for what must've been an hour or two. I'm still beating myself up for not buying it. It was extraordinarily cheap.

I love this book, too! Its unusual, but mine is light blue, but it covers the same years... I like that it includes all of the traded sets, too. I have had mine for quite a while. I actually tried to sell it a few years back, but with no luck. I am so glad I hung onto it! Enjoy the book!

Wow! I never knew that existed. Having an addictive personality, now I want one too! :)

I use this book at least a couple of times a week. LOVE IT!

I remember a book like that in my library, circa 1989. Though by then I had "discovered" hockey, I could still appreciate the book for what it is.

Thanks for the comments guys. Now, if only they had one for hockey cards!!!