Today I've got the contents of yet another PWE from my friend Mark Kaz at This Way to the Clubhouse... 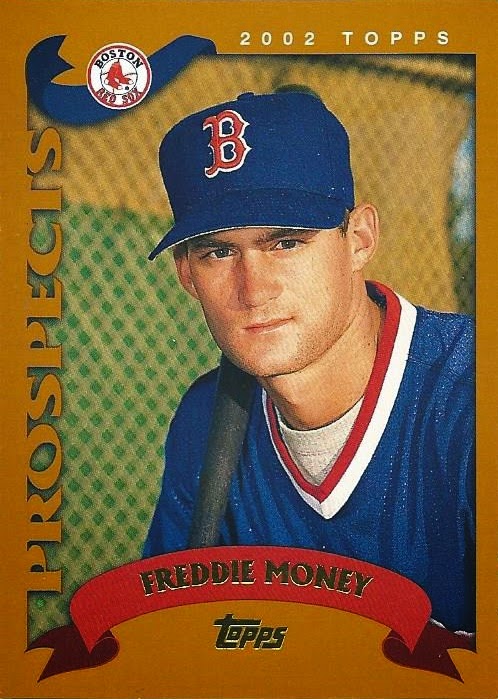 Mark certainly didn't disappoint with this latest entry in our ongoing game of PWE ping pong.  Staring me right in the face when I opened up the envelope was my very first Freddie Money card!  He may never have made it to the Majors, but what a name. 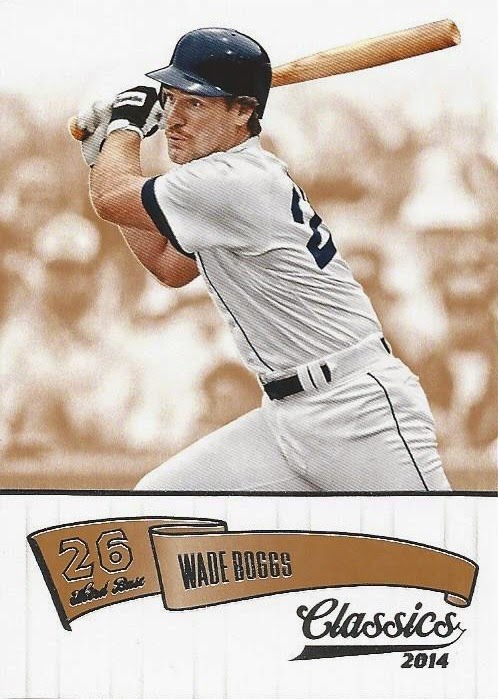 Enclosed was my second card from last year's Panini Classics set.  I'm a Panini fan overall, but so many times what could be a nice set is just ruined by lack of a license.  I still don't know why MLB thinks a monopoly for Topps is a good thing.  Same thing with Upper Deck and hockey, but I'll save those rants for another day.  In the meantime, my Wade Boggs count increases by one. 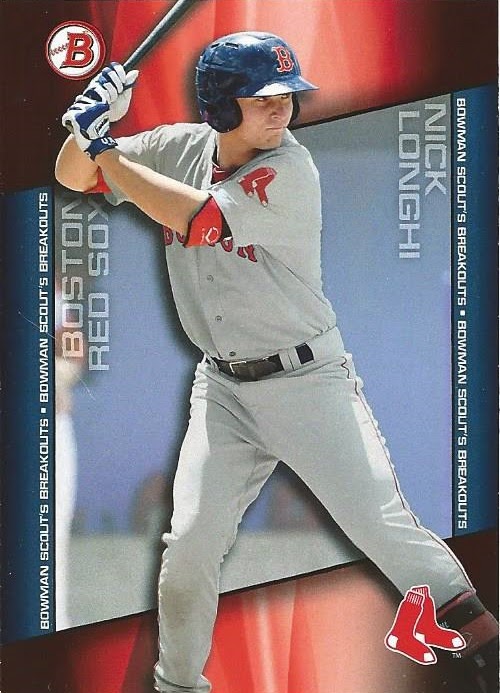 In typical Bowman fashion, this card took me a while to identify, and pronouncing it is a mouth full.  I believe it's a 2014 Bowman Draft Picks & Prospects Bowman Scout's Breakouts insert.  This is my first card of Longhi, who's apparently with the A-ball Greenville Drive.  It's a long road to the pros from there, time will tell. 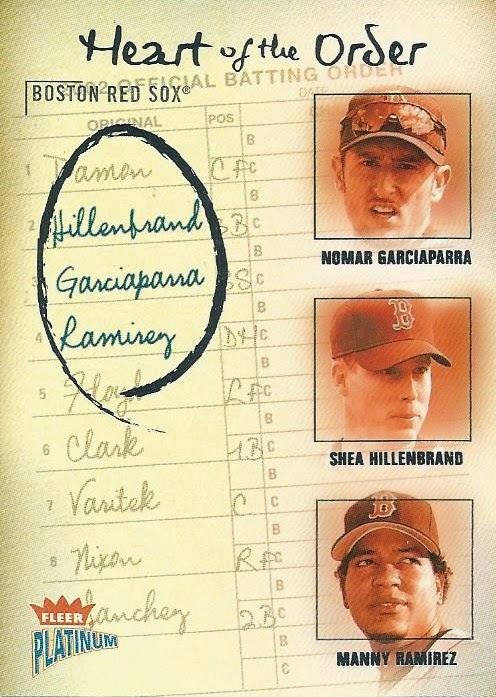 I had never heard of these Fleer Platinum Heart of the Order inserts before.  I like the concept though.  This one's from 2003, and it's amazing how much different the lineup looked just a season later when the Red Sox finally won a World Series. 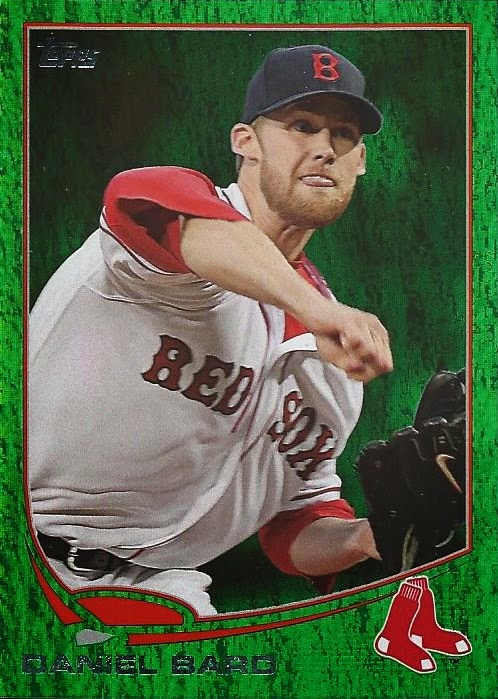 It seems nearly every PWE Mark sends up to me has at least one parallel in it, which is fine by me!  This is the 19th Red Sox Emerald parallel I've got now, between 2013 Topps flagship and update.  Can't be too many left to track down at this point. 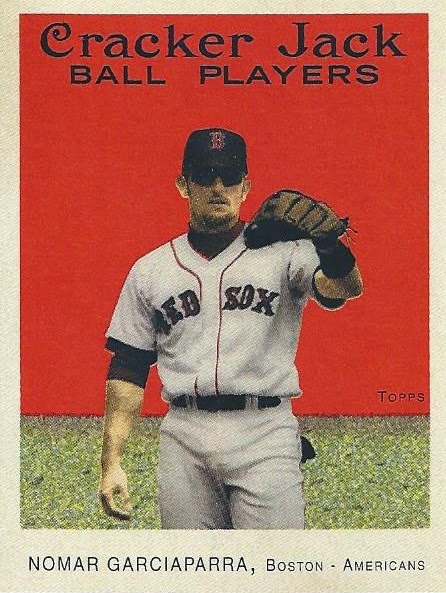 This latest envelope contained a pair of Nomars.  First up is this great mini sticker from 2004 Topps Cracker Jack.  I already had Garciaparra's base card from this set, so finally adding the sticker insert is great. 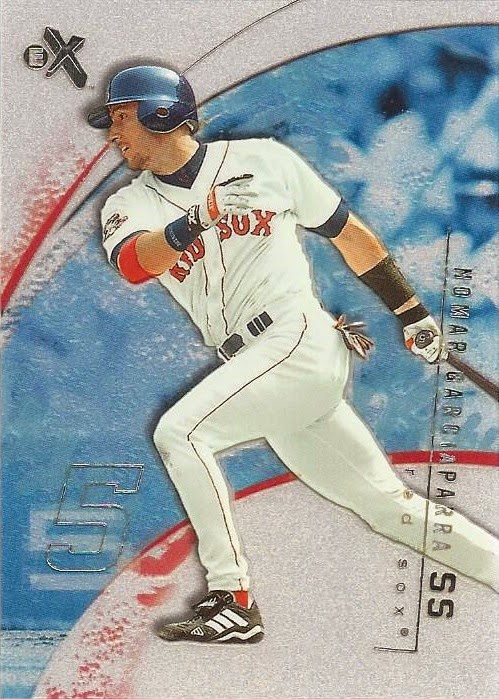 The other one was from a set I'd never seen before, 2002 Fleer EX.  The design is very busy, but the card is somewhat see-through which I like.  Not quite totally clear, a little cloudier than most of the acetate cards I've seen over the years.  This duo has me on the precipice of 100 unique Garciaparra cards, and I'm sure I'll be crossing into the triple digits in the coming weeks. 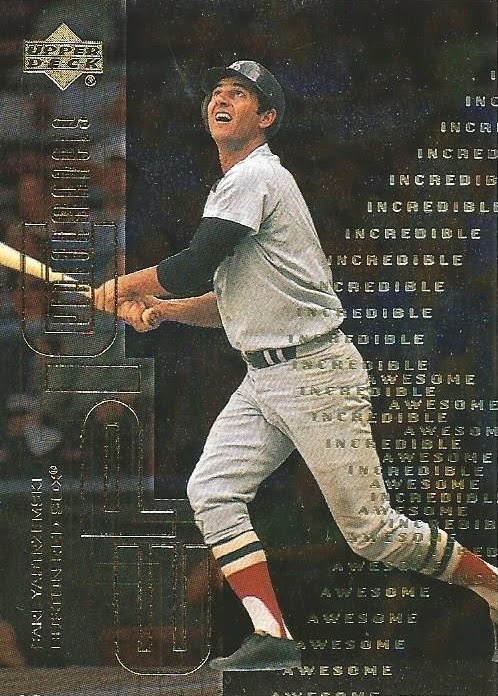 Speaking of crowded or busy designs, I'm not sure it was necessary to use the words incredible and awesome more than a dozen times each on the front of this card.  Other than that, I can't complain, it's a nice insert of one of the greatest Red Sox hitters of all-time, from a period in which I wasn't collecting at all. 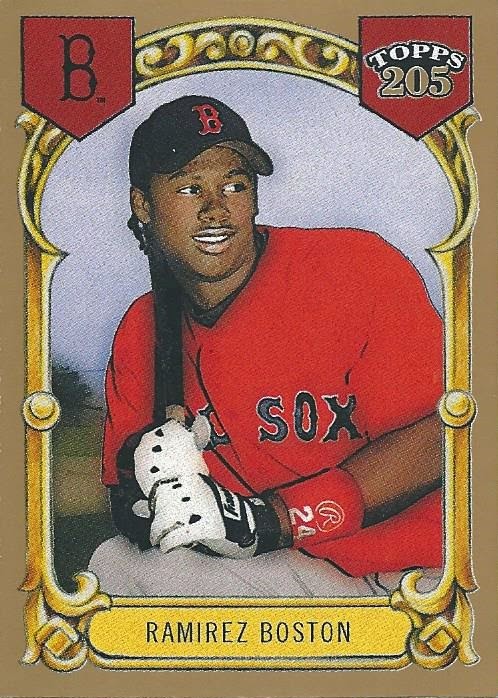 Closing things out, a really cool Topps T205 rookie card of slugger Hanley Ramirez.  Since I wasn't collecting when he was a big-time prospect for Boston prior to being dealt to the Marlins, I have precious few cards of Hanley with the Red Sox.  I think this one qualifies as my favorite out of that bunch.  What can I say, I'm a sucker for retro.

Mark, thanks as always, and with any luck my latest package has already arrived at chez Kaz!
Posted by shoeboxlegends at 1:16 PM

A little bit of everything in that package. I hadn't heard of a few of those sets.

With a name like Freddie Money... Wonder what he's doing nowadays??

Believe it or not I spent a considerable amount of time today trying to figure that out, but ultimately came up empty-handed.