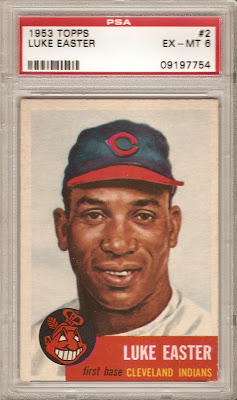 Simply put, Luke Easter was a monster! At a height of 6'4" and weighing in at around 240 lbs. he truly must've been imposing as he stepped up to the plate. He enjoyed a lot of success in the Negro Leagues in his early career before transitioning to Major League Baseball. In 1948 he had a highlight year, batting .363 and leading the Negro Leagues in both home runs and RBI while leading his team to the Negro League World Series championship. The Cleveland Indians took notice and signed him to a contract.

Luke was 34 years old by the time he started seeing playing time with the Cleveland Indians, so his career in Major League baseball was a short one. He did have some measure of success though even at his age. In roughly 3 1/2 seasons in the majors he hit 93 home runs and 340 RBI. 1953 was the beginning of the end for Luke though. Coming off of a '52 campaign where he hit 31 dingers and had 97 RBI (narrowly missing his third straight 100+ RBI season), Luke appeared in only 68 games in 1953. He did bat .303, however his career would come to an end the very next season after just a 6 game stint with the Indians in 1954.

Easter was known for using his size to his advantage and clobbering lengthy home runs, and is the only player besides Mickey Mantle to hit one over the right field scoreboard in Cleveland's Municipal Stadium. Sadly, after retiring from baseball Luke was killed by two armed robbers while transporting $40,000 in cash from a bank. I'll leave you with some high praise for Luke from baseball writer Bill James, "if you could clone him and bring him back, you'd have the greatest power hitter in baseball today, if not ever". Pretty impressive...

If you'd care to learn anymore about Luke, there's a great article here.

Posted by shoeboxlegends at 8:48 PM