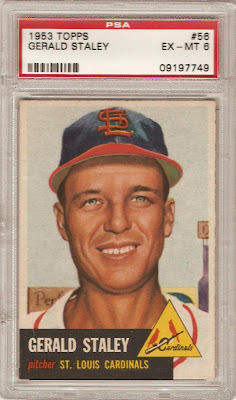 I'm sure most baseball fans have no idea who Gerry Staley was, I certainly didn't before buying this card. Unlike the last couple of unknowns I've written about though, he was actually a half-way decent player. Gerry was pretty solid as both a starting pitcher and in relief throughout his 15 year career. 1953 was a great year for him, as he would go 18-9 with a 3.99 ERA, the second highest single season win total of his career (he never crossed the 20 win mark).

Gerry was selected to 3 All-Star teams in his career and finished in the top 30 in the league in MVP voting on 2 different occassions. He converted to a reliever for the last few years of his career and was part of the bullpen for the 1959 Chicago White Sox, who won the A.L. Pennant. All in all he had 134 career wins, 61 saves and a respectable 3.70 ERA. Gerry looks like a nice enough guy, but he did lead the N.L. in hit batsmen in both 1952 and 1953. He plunked 17 batters in 1953 alone!

Posted by shoeboxlegends at 8:46 PM

Gerry passed away at the beginning of the year. He was a nice guy.