1991 Ultimate: The Worst Hockey Set Ever? 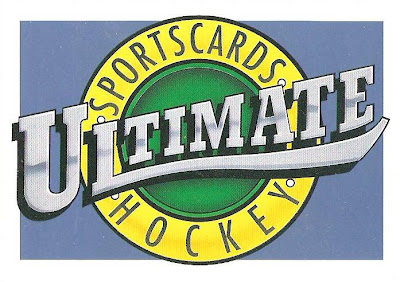 The Michigan State cards in my last post got me thinking about other odd-ball hockey sets I've accumulated throughout the years. There's one that sticks out in my mind as being one of the most terrible hockey card sets I own. In fact, it's so bad that I've actually kind of grown fond of it. I'm talking about the 1991-92 Ultimate hockey set. This 90-card gem was released to commemorate the recent first-round draft picks and was the first set ever released under the Ultimate brand. Not surprisingly, and unless I'm mistaken, it was also the last. Here are just a few examples of why this set is so terrible... 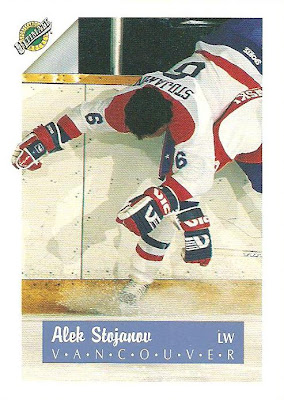 We'll start with one of the few cards I think actually has some merit. I'm a sucker for good action shots and this one is incredible. I'm sure Alek Stojanov was pretty disappointed to be immortalized in this way, the recipient of a picture perfect hip check. Don't worry Alek, nobody bought this awful set anyway. The photography is so bad in the rest of the set that it almost makes me wonder if this particular shot was staged. 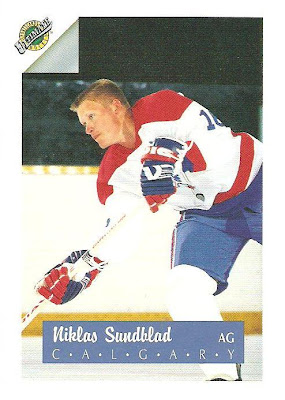 I don't think the Ultimate brand was licensed by the NHL, so it looks like they basically gathered everyone together in the same rink I used to play in when I was ten, slapped on some jerseys with the word "Smokey's" on them (WTF?), and had a good old-fashioned scrimmage. The reason I chose to show this card of Niklas Sundblad is because his position is listed as AG. What the hell is that? I think it's safe to say this is the only hockey card I own that designates AG as a position. 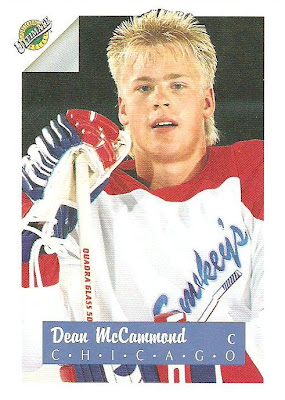 Here's a good shot of the Smokey's jersey, if anyone out there knows what this is I'd love to hear it. Although the folks at Ultimate managed to label Dean with an actual valid position of center, they spelled his last name incorrectly (every hockey fan knows it's Dean McAmmond right?). This is one of many pieces of evidence suggesting the editorial staff at Ultimate was comprised of barely literate 2nd graders. 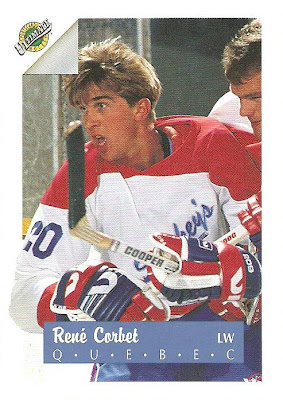 I think this Rene Corbet card speaks for itself... 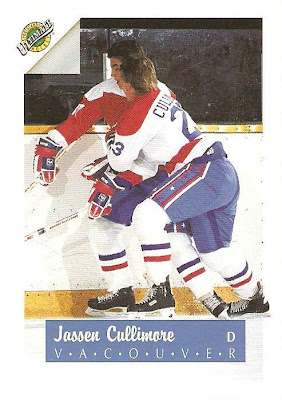 Here's another shining example where proof-reading may have helped. If you're trying to start up a hockey card business you might want to avoid omitting a letter in the name of a major city in the country where hockey is perhaps more popular than anywhere else in the world. 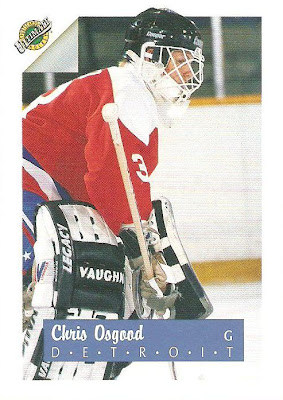 There were actually some good players in this draft who went on to have long and successful careers in the NHL. 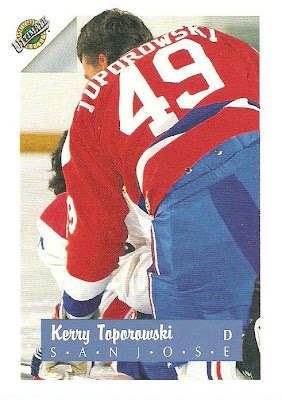 This is one of the worst photos I've seen selected for a hockey card. I'm not sure how long this event went on, but there was not a single picture of Kerry better than this one? I'm not sure what's going on in this shot, but it's actually at this point that the set starts to get really gay. I hope I'm not offending anyone, there's just no other way to describe it. 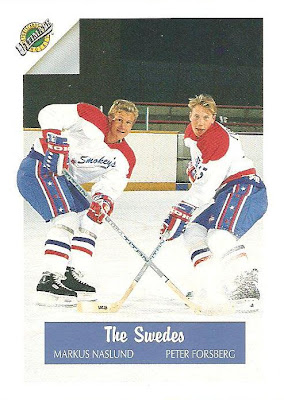 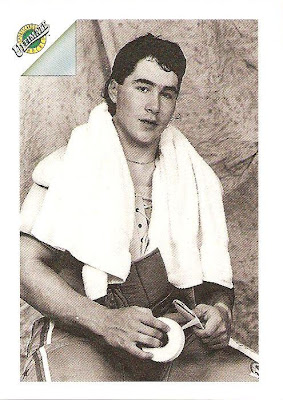 For some reason, towards the end of the set, Ultimate decided to throw in 10 cards showing the players off-ice, apparently photographed by the same gentleman who did my 5th grade school photo. I would've gone for the laser background if I were Pat Falloon. 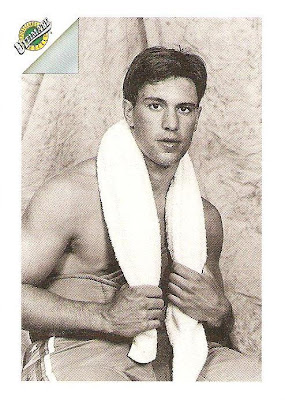 OK, this is totally uncalled for. I have to say that if my girlfriend found this card I'd have some explaining to do. Was Ultimate trying to make a statement in the 12-16 year old female market? Because it didn't work. 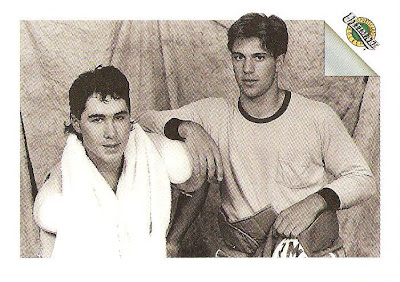 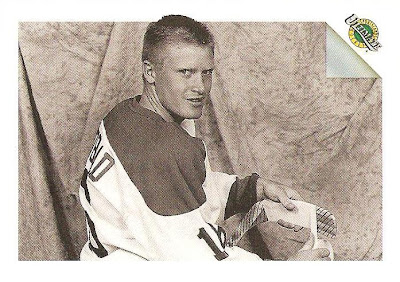 This is just an awkward shot of Niklas Sundblad taping a stick while glaring creepily at the camera. 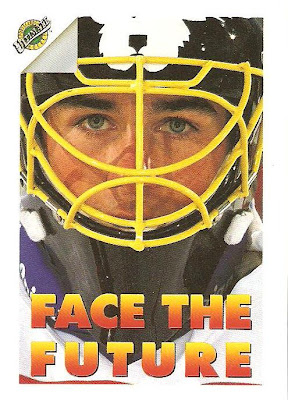 The final card in the set, which serves no other purpose except to prevent the set from being an odd 89 cards in size, reminds us to face the future. As opposed to what? I'm pretty sure we have to face the future Ultimate, there's really no other option.
Well, I hope you enjoyed one of my favorite odd-ball hockey sets, and quite possibly the worst hockey card set I own. There's a whole lot of crap packed into this small, 90 card set. What's your favorite (or least favorite) odd-ball set?
Posted by shoeboxlegends at 11:14 PM

for some reason... i think smokey's was a big time card shop from back in the day... possibly based in las vegas or southern california? maybe this is one of those sets created by their shop, but distributed on a national level. anyways... i remember when this set came out... along with the classic draft pics and arena draft picks set. pat falloon was suppose to be a franchise player for my favorite team. that never happened.

AG is the French acronym for Left Wing. (Which still doesn't explain why it exists on an English card.)

Yeah... Ailier Gauche... I still have a couple of these factory sets around in a box somewhere... trade bait one day maybe?
I remember Pat Falloon was supposed to be the second coming.
Not so much.

Thanks for the info guys!

I hope I'm not offending anyone, there's just no other way to describe it.

You have offended me, because I was going to make that an upcoming "Card of the Week" on Puck Junk :)

LOL. My neighbor just handed me a couple of hockey books and this set of cards for my son. I was hoping I hit a hockey goldmine, but one look at the horror that is this set and it's back to work for me tomorrow.

Thanks for the info.

Tom, that is hilarious. Glad this post has served a purpose. Definitely head to work tomorrow!

I just bought this set at the thrift store today. Worth both dollars I spent on it.

The pair of 12-16 year old girls who used to come into the card shop I managed would have been all over these.
They loved Niedermayer especially.

"Tuesday, August 23, 2005
More Crooks Go To Prison
Phillip and David Scheinman pled guilty in Federal court on August 12 for selling forged sports memorabilia. They owned and operated a store in Las Vegas called Smokey's Sportscards. They were prominently featured on TV when the FBI raided numerous establishements in Operation Bullpen. The raid on their store made TV news all over the country. They also sold on ebay. The father-son combination will be serving at least one year in Federal prison."

I can't seem to Find a price list on these

I'd say about a dollar, maybe two for a complete boxed set. Any single cards, maybe a nickel? In a nutshell, if someone offers to buy yours, TAKE THE OFFER!

For the English version of this issue:

Add in the French version:

All told, approximately 23.895 million of these cards were printed.