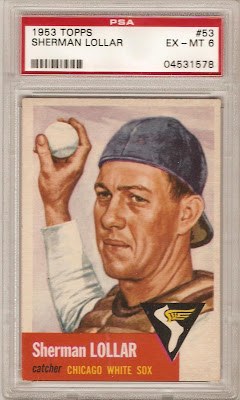 I've been nursing a post-Pearl Jam concert hangover for the better part of the day, but it's been a week since I posted so I'm going to take care of another 1953 Topps Project post, although this might end up being a short one. Today's subject is Sherman Lollar of the Chicago White Sox.

Sherman bounced around with 3 other teams in his early career before finally settling in with the Chicago White Sox in 1952 for what would become an 11 season stint. Sherm was actually a 7 time All-Star for the White Sox and was awarded a Gold Glove for his play behind the plate in 1957 (the first year Gold Gloves were presented), 1958 and 1959.

Lollar would retire with the highest career fielding percentage for a catcher, and would then spend 5 years as a coach with the Baltimore Orioles. Sadly, Sherman passed away due to cancer at the age of 53. That's about all I can muster today...

Posted by shoeboxlegends at 3:23 PM

Sherm! I remember buying this card in a card shop in Athens my freshman year of college. One of my favorites.

Hmmm. Pearl Jam and the White Sox in one post? I'm in heaven!

Yeah, Pearl Jam was awesome as always. I saw their shows on Saturday night and Monday night. I've seen them countless times over the years and I swear they are just as on point as the first time I ever saw them. Best live band out there in my opinion hands down!

I was only lucky enough to see them twice. Once in 1998 and once in 2003. Both shows were fantastic! Pearl Jam and (surprisingly) "Weird Al" Yankovic are the two best live acts I have seen. They both have the right balance in their shows and their performances are dead on.